Peel Here #93: A sad substitute for a lack of BJ and the Bear stickers…

I figure that since I have an essay up this week at Monkey Goggles (the swell Archie McPhee online literary magazine), I should try and keep with a simian theme.  I’ve been sitting on this week’s selection of stickers for awhile now and I don’t know why.  These came from Anne and Jerzy Drozd and were part of a larger collection, but I felt they deserved to sit apart and shine because they’re so damn APpEaling.  Stupid pun aside, seriously who doesn’t love a monkey?  Well my friend Darrel for one.  On his first trip to Thailand he reported on just how annoying these little critters can get when they become used to living side by side with a human population.  It’s all poop flinging, inappropriate goosing, and theft.  I’m not saying all apes and monkeys are horrible to deal with, I saw King Kong (the ’31 on thank you very much), I cried during Project X, I have a heart.

I guess I didn’t want to just go the normal route when evoking the monkey and pander to the nerdgasm that tends to come in their wake (can you imagine if there were ninjas, pirates, and zombies in this post?)  Anyway, I’m not sure what year these hail from, though the collection I received had stuff that ranged from late 70s to around ’84-’85, so something around there sounds about right.  I’m thinking earlier rather than later judging by the style of the striped shirt on banana-eating-monkey number one, and the abundance of orangutans (which were like KISS-huge in the late 70s.) 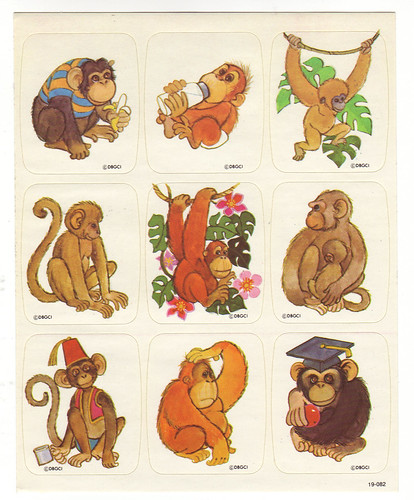 I can’t even begin to convey how cool it is that we got a fez wearing organ-grinder monkey in the set.  That would have been the first one I chose to include, that’s for sure.  I’m also glad there are no see-no-hear-no-speak-no trio as that gag can get kind of tired (unless the speak-no gets booted and they make a movie starring Gene Wilder and Richard Pryor…)   To be honest, I’m kind of missing a rainbow-butted baboon or a creepy winged monkey though, but I can’t have everything.

Seriously, where are all the BJ and the Bear sticker sets at?