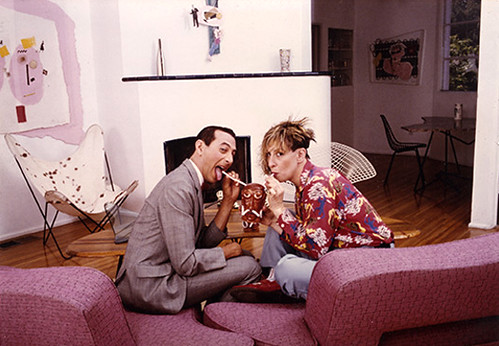 Do you ever have one of those days where everything seems to just coalesce?  Last Friday I woke up to a pseudo press release in my inbox announcing the opening of the Allee Willis Museum of Kitsch on September 14th, and of course the first question that would come out of my mouth had I been awake enough to be enthusiastically talking to myself was, "Who is Allee Willis?"   I tend to get a decent amount of press releases about 80s themed or kitsch/ephemera projects, usually revolving around hip hop groups featuring a bunch of geeky white guys name dropping Axel Foley, He-Man and Rubik’s Cubes.   It becomes an automatic process to read through them just far enough to know when it’s time to stop and then I flush ’em out of my short term memory.  There was something about this one that stuck with me though.

I didn’t think about it all that much, but it was the beginning of a day of odd connections.  When I got into work I stuck one of my favorite mixed CDs into the computer, psyching myself up for a long day of data entry and cataloging media tapes.  The CD features some of my favorite movie anthems including Michael Sembello’s Rock Until You Drop from the Monster Squad, Cyndi Lauper’s the Goonies are Good Enough, the Fight Song from the Karate Kid, the Cherry Bombs songs from Howard the Duck, the Pointer Sister’s Neutron Dance from Beverly Hills Cop, as well as some stuff from Rad, the Legend of Billie Jean and Thrashin’.   Little did I know that almost half of the tunes I was rocking out to were written or co-written by Ms. Willis.  Part of the reason I broke out this CD was that my good friend Kevin and I were going to watch Howard the Duck for the upcoming evening’s movie night we hold each Friday.

Anyway, as the day wore on I hit a bunch of sites while on break looking for some fun stuff to read about.   One stop was finally sitting down to read Kirk Demarais’ first article on Archie McPhee’s new online literary magazine, Monkey Goggles.   The article takes a look at some selections from the 1959 PICO Novelty catalog, in particular a great flask with an awesome kitschy plastic head called the Hip Nip. 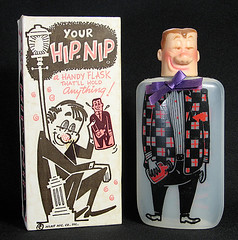 I’ve seen a bunch of novelty flasks, but none quite this novel and fun.  I mean drinking out of a flask that looks like a little tipsy man is just bizarre.  After a bit more web browsing, I remembered to take a closer look at what this Allee Willis was all about.  I whipped over to her blog and started digging through the archives, marveling at her insane collection of odds and ends.  Lo and behold Ms. Willis has her own Hip Nip in the collection.  She even has the sister flask, the Hot Nip. I love it when I find these kind of connections in the junkyard of pop culture.   It’s like some sort of affirmation for my interests, as if everything is starting to make sense.  Flipping through the entries in Willis’ blog I couldn’t help but fall in love with some of her treasures like a fleshy pink cup molded in the image of Mr. Peanut, or this Monty Python Nights-of-Ni-esque four-headed Monkees doll… 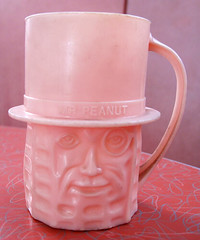 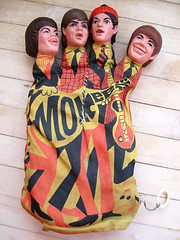 She even has one of the coolest pieces of wall art known to mankind, a vintage Billie Dee Williams endorsed Colt 45 malt liquor electric sign.  Who do I have to kill to get a hold of one of these beauties? 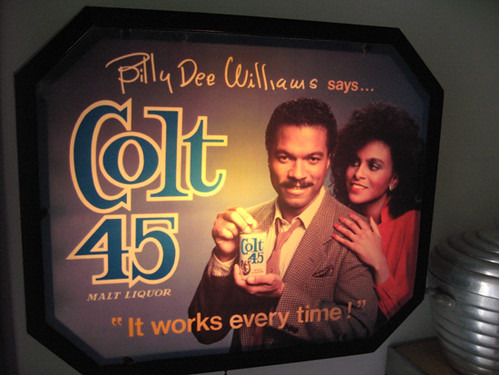 This is the sort of stuff that I would love to find while digging through antique shops and flea markets.  I never have this kind of luck though, so I can’t help but love the idea of the Allee Willis Museum of Kitsch!  You can check out a sneak peek at what to expect by watching this trailer… 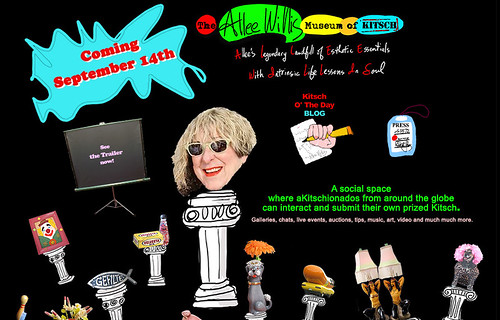 As I mentioned above the website is set to open proper tomorrow, Monday the 14th of September in tandem with a week-long physical exhibit in Los Angeles at the newly relocated Ghettogloss art gallery on Melrose.  The gallery will be "…displaying hundreds of amazing artifacts from her rarely-seen-in-person kitsch collection and will frequently be on hand greeting visitors and discussing the Allee Willis Museum of kitsch. Allee’s grand kitsch exhibition will feature two fabulous AWMoK launch parties (on Monday, Sept. 14th and Monday, Sept. 21st); the debut of her delightful "What Is Kitsch?" short film series; Allee’s unveiling of her featured "Kitsch O’ The Day" blog item live at noon daily in the gallery’s front window on L.A.’s ever-popular Melrose Avenue; her usual megaton of scrumptious junk food; specially created gourmet treats from L.A.’s hottest new restaurant, Susan Feniger’s Street, of which Allee is part owner; live auctions of spectacular kitsch masterpieces hand-picked by Allee herself; a first-time-ever public raffle to win a guided tour of Allee’s exclusively private Willis Wonderland; a not-to-be-missed karaoke sing-off of Allee’s classic Earth Wind & Fire hit, "September," at the party on the night of the 21st."

To cap last Friday off, and after watching Howard the Duck with my friend, we were scanning to credits to see if Lea Thompson actually sang on any of the Cherry Bombs’ songs, when I noticed that Allee Willis co-wrote practically everything on that soundtrack.  Though she’s probably better known for writing Boogie Wonderland and co-writing the theme song to Friends, it’s her work on the various movie soundtracks of the 80s that I appreciate the most.   I never knew just how much she influenced me and I can’t believe I didn’t even know her name until this past weekend.   If you get a second and want to be wowed by an insanely awesome collection of sublime pop culture, head on over to Allee Willis’ blog and be sure to check out the launch of her Museum on Monday.  Be sure to tell her that Shawn from Branded in the 80s sent ya!

Spiriting the Nerd Lunch crew away to the world of Miyazaki!