I’ve been thinking a lot about 70s/80s teen sex comedies lately in the wake of Severin Films’ announcement they’ll be releasing the seminal (in every sense of the word) comedy flick Screwballs on DVD.  By the way, the disc comes out today and you can order your copy by clicking on the cover below… 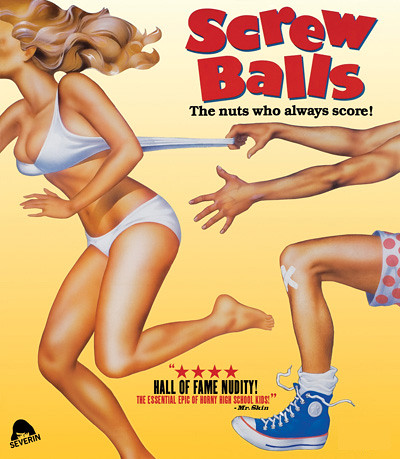 Anyway, back to pondering teen sex comedies.   It’s really surprising to me how often films don’t deliver on what they promise in terms of content, in particular genre flicks.  I can’t count how many times I’ve rented a horror flick that wasn’t scary, gory, or disturbing, or a comedy that just didn’t try that hard for laughs.  This past year a friend and I sat down and watched a ton of 80s comedies both in the hopes of reliving some nostalgia and to finally expose my friend to the original R-rated bits and pieces that he never got a chance to see growing up as a kid.   My experience to most of the films we watched came through either renting them on video or catching them in the wee hours of the morning on HBO or Cinemax.  My friend on the other hand grew up a bit more sheltered and wasn’t allowed to watch most of them, and the stuff that he did catch was on basic cable over the years so he has felt like he’s really missed out on the raunchy adult humor.

Turns out he didn’t miss all that much.  Even flicks like Porky’s really don’t have all that much in the way of nudity or language so bad that it’d make his grandma blush.  Granted Porky’s was the brainchild of Bob Clark, the same guy who brought us the beloved classic A Christmas Story, but he was also the guy that brought us Black Christmas, so we weren’t sure what to expect.  Overall, after watching flicks like Fast Times at Ridgemount High, Meatballs, Sixteen Candles, Revenge of the Nerds, and Risky Business my friend was starting to feel like he hadn’t missed that much at all.  Personally, I seem to have memories of more raunch in my 80s comedies, though there are a lot of flicks that I watched back in the 80s that we didn’t revisit and were more on the periphery in terms of tasteful content like Hot Dog, Kentucky Fried Movie, Class (which seemed really dirty at the time), and the various academy (Police or Screwball) and school movies (Rock ‘n Roll High, or Ski), all the stuff that I’d catch for years on USA Up All Night with Rhonda Shear or Gilbert Godfried.

Sure, most of these films have some rude language and a jiggling pair of boobs here and there, but none of them feel like they’re delivering on their potential, not at least in the way that a lot of exploitation flicks did in 60s and 70s.  When you sit down and watch a Herschel Gordon Lewis film like Blood Feast or Two Thousand Maniacs, you get what you pay for.  When you watch a Jack Hill flick like the Big Bird Cage, Foxy Brown or Switchblade Sisters, you get plenty of violence, language and T&A.  So with the 80s teen sex comedies, it sad that for the most part you really don’t get more raunch.  That isn’t to say that I don’t like John Hughes (the Breakfast Club, Pretty in Pink) and Savage Steve Holland (Better Off Dead, One Crazy Summer) flicks, just that there was a relatively untapped market for making flicks that were a bit more visceral.

Well, getting back to the reason for this post, I have to say that I never saw Screwballs back in the 80s and it was one heck of an oversight.   Screwballs is to teen sex comedies what Last House on the Left is to horror.  There are more naked girls, goofy horny guys, and inappropriate jokes than in most other 80s films combined.   In fact the raunch reaches a level of slapstick that is more on par with the feel of a crazy 30s era gag-a-second Fleischer cartoon than an 80s comedy.  The flick was also produced under Roger Corman, which might have something to do with its level of debauchery (but in the best sense of the word.)

If you haven’t seen it, the basic gist of the film revolves around a pact made by five senior guys who all have a beef with one girl, the ultimately virginal Purity Busch.  She’s either gotten them in trouble or lead them on and the guys decide that by the end of the school year they’ll either get to see her "goods" and score, or die trying.  Though the film should be qualified as terrible, where plot is really secondary to the mass amount of gags in the film, the set dressing keeps bouncing between the 50, 60s, 70s, and the 80s, and with acting that for the most part is insanely bad, it’s still pretty great.  It’s almost like watching a live action adaptation of a much dirtier version of MAD magazine that still manages to be funny.  Between sessions of strip bowling, insane make-out sessions a the drive-in, freshman breast exams, trips to the strip club (with a guest appearance by Russ Meyer star Raven DeLaCroix), ornate brainwashing attempts involving an giant fake hot dog, insanely inappropriate cheerleading practice in bikinis, and a milf mom who is playing the cougar to the point of being overdubbed with animal growls, you’ll never be bored.

I can honestly say that I was blown away by this long-overdue-on-DVD gem, for however contrived and cliché a statement like that can be.  I have to give a hand to Severin Films for taking the time and effort to restore this film (as well as stuff like the original Inglorious Bastards.)  The DVD looks pretty good for a lowbudget early 80s film like this, and has a nice set of special features including a commentary track as well as surprisingly insightful interviews with the director Rafal Zielinski and cast (there are clips with the director and some of the actors online.)  I don’t know what more I can say except that, again, the DVD is available to purchase as of today. If you’re a fan of goofy 80s comedies and boobs, than this is highly recommended…

Peel Here #108, These stickers are Maniacal

Someday SOON we will find the Cities of Gold!