I’ve talked before about some of the Holy Grail items that I was looking to procure for my sticker collection; stuff that is either wicked expensive for some odd reason (Dune sticker cards from Fleer or the 1980 series of Topps Monstickers, puffy sticker versions of the Ugly stickers they did in the late 60s early 70s), or stickers that just shouldn’t exist anymore.  It would be awesome to find books of S&H green stamps from the 70s or 80s, collections of produce or grocery store specific stickers, and some off-brand vending machine stickers from the 80s.  With the Dune and Monstickers, it’s only a matter of time before a stash is found and it devalues the current crop on the secondary market, but the others just shouldn’t exist.  I mean, people didn’t collect green stamps; they either tossed them when the first got them for grocery shopping or they used them.  For some odd reason there are a lot of collections of produce stickers floating around, but they’re typically from other countries, so they hold little to no nostalgic value for a guy like me.

As for vending machine stickers, well we’ve all seen these in Pizza Huts or near the check-out counter at your local grocery store.  Plop down 25 to 50 cents and you get one sticker in a little cardboard sleeve.  These are beyond disposable.  First off, they’re typically off-brand or bootleg, and secondly, you never get what you want.  When spying that badass Wolverine or Transformers sticker in the little window that you want, the machine suckers you in, and 50 cents later you’ve got a smiley face in a scuba mask or a Britney spears sticker.  And that little girl that wanted that smiley face or Britney sticker, she got the prismatic Decpticon symbol, pitched a little fit, and threw it away.  I’m positive that 90% of these get thrown away or used immediately with next to none getting socked away for later use.

Well, you can’t discount these things.   That 10% that’s floating around out there lost to space and time?  It’ll eventually turn up.  Me, I’ve been waiting for a specific series of vending machine stickers to pop up for years, ever since I got one back in 1989.  Our family was in the process of moving from Florida to New Hampshire, and in some non-descript side of the highway fast food strip mall (you know the kind, it’s like a food court with three or four different places like KFC, Carl’s Jr. and a Roy Rogers all in one building) I found a sticker machine with a set of the coolest horror movie stickers.  I could only scrounge together enough change to get one sticker, but I loved it.  It was from the movie Nightbreed, one of my all-time favorite horror flicks.   I stuck it to a little bookshelf that was over-packed with Stephen King and Clive Barker books, a shelf that was thrown away sometime in the late 90s when I left home.   I’ve coveted that sticker, and the rest of the set for years.  Thank god for ebay, as I finally found a handful of stickers… 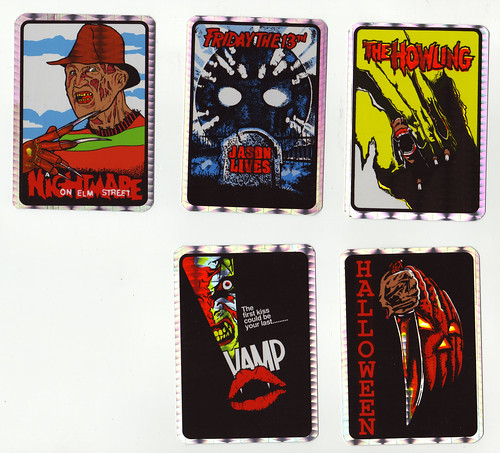 All in all, though it’s only five of the stickers from a set of 40 or 50, it’s a pretty nice haul covering some of my favorite horror series, Nightmare on Elm Street, the Friday series, Halloween and the Howling.  I’m not all that into Vamp, though I love Robert Rusler in it (and in Nightmare on elm Street 2, Weird Science, and Thrashin’.)   In doing some research I stumbled upon a nice collection of these on Dr. Death-Threads’ Headstone City blog.  In part one you can see the Nightbreed sticker I loved so much.  Personally, it’s at time like this that I think the internet truly shines, as I can sit here and marvel at stickers that just shouldn’t exist, and throw in my own rescued treasures as well.   I’m having a Tiny Tim moment (Christmas Carol, not the falsetto-singing ukulele-playing wonder.)

Also, I typically hold this sort of horror content aside for the Halloween season, but I’m sort of putting this edition of Peel Here out as a initial call to arms.  The season of the witch, warlock, vampire, pumpkinhead, werewolf, creature from the Black Lagoon, Frankenstein’s Monster and what-ever-creep-you-love is just around the corner.  I know a whole heck of a lot of people participated in the loosely grouped Countdown to Halloween blog-a-thon last year and it’s looking like a whole lot more might be on board this year.  Well, I’m up for it again having already picked out a theme and started working feverishly on the content I’m planning on sharing.  If you’re curious what the past years have been like, you can click on the Halloween Archive to the left, the orange banner with King Kong, and flip through my last three years worth of material.  You’ll also find a plethora of links to other sites.   It’s like opening a Pandora’s box of spookiness.

Anyway, if you dug these stickers, you might also enjoy the following posts:

GPK Halloween Countdown Day 25, You’ve got the Body, He’s got the Brains….