Finally getting around to finishing off the Cartoon Commentary! series on the 1st G.I. Joe mini series (A Real American Hero).  This final episode, titled A Stake in the Serpent’s Heart, was first broadcast on September 16th, 1983, and it was the last taste kids would get of the cartoon series until the following year when the second mini debuted.  I’ve said this a number of times recently, but it bears repeating, these first five episodes go a long way in defining the series, and bowing only a week after the first syndicated episodes of He-Man and the Masters of the Universe, it also helped to define the next decade of television animation.   1983 really was a banner year for action in cartoons as we also saw the release of Dungeons and Dragons on Saturday mornings, and between these three shows TV animation, at least when it came to action, was free for the first time in over a decade.

Granted, there were shows that flirted with action premises, Super Friends, Blackstar, the Lone Ranger, Thundarr, and Spiderman & His Amazing Friends just to name a few, but all of these shows were just not quite there in terms of bravery.  Even He-Man, for its revolutionary first run syndication, and breaking the ice in terms of injecting action back into cartoons, was still taking a very moral stance on depicting violence.  But G.I. Joe burst onto the scene like Duke amid a group of Cobra Troopers, punching and kicking everything in sight.

So, getting back to the episode at hand, the story picks up from the cliffhanger where Destro and Scarlett are plummeting in an escape pod towards certain doom.  Of course, in the "coming next time on G.I. Joe" segment at the end of the previous episode we clearly see Scarlett running down a Cobra compound hallway, letting all the air out of the opening sequence of this episode…

Where this sequence fails as a cliffhanger, it succeeds in bookending the mini series as Destro leads Scarlett off of the escape pod at Cobra headquarters.  Just like Duke, and with an impassioned fit of feminism from the writers, Scarlett proves herself to be quite the "Woman of Action" as she breaks free and takes on a platoon of Troopers.  It’s another example of that never-say-die attitude exhibited by the Joes, and a more subversive example of imbedding a sense of morality into the show.   In He-Man for instance, this morality would be worn on the show’s sleeve so to speak, and we’d more than likely be treated to an insightful yet, borderline obvious quote from a character.  Here this sense of always doing the right thing and never giving up is written into the action.  It’s still a bit over the top, but much more natural. 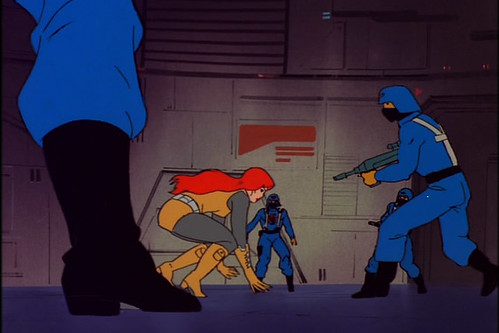 One thing that I love about the Sunbow cartoons is their weird villain relationships.  You tend to get a lot of characterization out of these villain characters while watching them bounce off each other.   Like the Starscream/Megatron relationship in Transformers, there’s a weird back and forth between Cobra Commander and Destro.  Whereas Starscream always talks big, he usually backs down to Megatron (except when Megs is at his weakest in the 1986 Movie, but that’s a story for another time.)  On the one hand, Destro seems independent, the head of his own arms dealing organization, yet on the other he’s always vying for and temporarily taking control of Cobra.   Unlike Starscream though, Destro is the more physically imposing in his tête-

Peel Here #60, why would anyone care about a rag doll teddy bear named Salvadore Dolly?

A more in depth look at the Crestwood Monster series…