It’s funny.  When I stop and think, really think, about merchandising and ad campaigns, it amazes me just how devious some of the practices are, especially when it’s aimed at kids.  It’s an area that I have strong feeling about, and weirdly it’s in support of both sides of the issue.  Let me back up for a second.  This all stems from a handful of stickers I wanted to share today, these Burger King branded puffy stickers (probably from around 1984 or so judging by similar stickers from other fast food chains…) 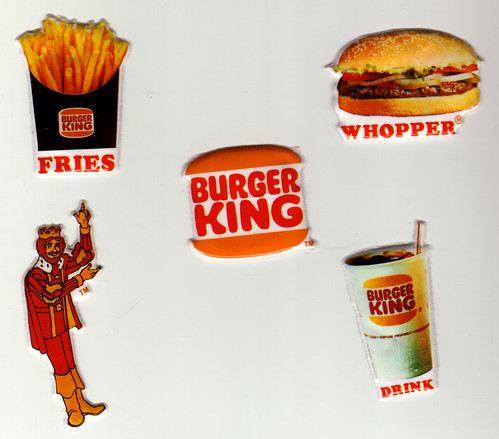 The basic conundrum is whether or not it’s appropriate to use a branded product as fodder for kid’s toys and the like.  I mean, how many kids are brand loyal for a fast food chain at that age?  Why would a kid pick up a pack of BK puffy stickers except because of the familiar logo design and the fact that it’s a sticker?  So it’s like getting a kid (or more likely their parent) to pay for an advertisement.  I think the fact that these are Burger Kind stickers sort of sits wrong in my craw because to be honest, the King character was always sort of creepy and hollow to me.  What’s his back story?   I’m positive he has one, but for the life of me (and without checking a wiki article) I haven’t the slightest clue.  This is certainly not a defense, but at least Ronald McDonald has a personality and I can understand why kids get fascinated with the McDonald-land characters.

It also reminds me of these super tacky school supplies I saw at Target the other day.  They were from a company called Terracycle which specializes in marketing products that use recycled materials, in particular junk food packaging.  There were pencil cases made from old Doritos cases and Capri Sun pouches, as well as binders made from similar materials.  Looking on there website there’s also backpacks, lunchboxes, and messenger bags as well.   On the surface this seems like a great idea, but really it’s just the worst kind of marketing ploy to wrap kids in billboards before sending them off to school.  Is there a reason that the logos on the packaging had to face outward?  Nope, and I’m sure Terracycle is getting some sort of subsidy from the companies whose products they’re recycling.   It just seems kind of evil in a way.

On the other hand, the legacy that this sort of crass marketing has in terms of acting as a pop culture time capsule is amazing.  We live in a world where we’re inundated with so much stuff, most of it products, and as distasteful as that environment can be it also provides a subconscious side effect as acting as sort of a Rosetta stone that helps us remember our past.  I’ve mentioned this concept before and it bears repeating.  Everyone probably has a fond memory of hanging out with family snacking on a particular cracker or sipping a specific brand of soda.   Since products are constantly changing in appearance or dropping off the face of the earth to be replaced by some new version, the old acts as a portal to that specific memory.

I mean I can still buy Betty Crocker Fruit Roll-Ups at any supermarket and they’re pretty meaningless to my existence.  But back in the 80s when Fruit Roll-Ups were still being produced by the Fruit Corners company, and they looked and tasted different, it means something different to me now.  When they were first released, the process of packaging the thin sheets of processed fruit leather was far from perfected, and often the fruity sheet would get so stuck to the plastic it was wrapped in it was damn near impossible to remove.   Because of this, and because I was a super lazy and weird kid I used to stick the whole thing, wrapper and all, in my mouth.  I’d chew on that sucker until all I could taste was the plastic backing, and then I’d spit it out into the trash.  Well one time when my father took me hiking in the woods all I had to snack on were said Fruit Roll-Ups and my less than brilliantly deductive mind didn’t think of what I would do with a left over chewed and slimy piece of plastic backing, and I ended up keeping it in my cheek like a screwy hamster for the entire hike, making myself sick and my father disgusted.  Now, thinking back on it, it’s a fond memory, a memory I owe to a product.  If I had the opportunity to get a hold of a bunch of original Fruit Corners branded Fruit roll-Up package stickers it would be a huge boon that would always take me back to that hiking trip with my dad.

Who knows, maybe the Burger King mascot, or a Whopper puffy sticker is someone else’s gateway to a fond memory.  May those Capri Sun pencil cases will be an amazingly fond memory for a kid.   I’m so torn on the subject.

Anyway, here are some related articles on Branded you might find interesting:

Now this is a film about Garbage Pail Kids!!!

I’m Down With OPP, er, Coveting Other People’s Property…