All right, I’m gonna turn over the next card. Concentrate… I want you to tell me what you think it is…

I did not see this coming.  I’ve heard that sometimes patience can be rewarded, and this past week I think mine has finally paid off.  Just over a year ago I mentioned the impending release of the Complete Real Ghostbusters cartoon on DVD from Time Life, and to be honest I was a little bitchy about the whole deal.  Basically TL was offering the series exclusively through their website at slightly bloated price of $180.  For the most part I’m not a fan of complete series sets, at least not ones this large as they tend to be overpriced, come in odd, overly flashy packaging, and usually contain bonus material not available on collections of individual season sets.  This last trend tends to bug me if only because complete series sets are usually released after any individual sets have finished coming out and it’s an example of the worst in DVD double dipping.

Lately this trend has been reversed, particularly with 80s cartoon properties, and to Time Life’s credit the full series came first.  The set was still about $60 too much and I have to say that I appreciate it when other options are available.  Even with their payment plan, you’re still overpaying for a series that’s been around for 20 odd years, and a lot of that money is going into useless "shiny" packaging.  Steelbook cases wrapped in a lenticular box is a bit of overkill, especially when these sets aren’t sitting on store shelves wowing potential customers.   Lets be honest, most people who pick up this set are going to wedge it on a shelf between the rest of their DVD boxsets and aren’t going to get all that much appreciation out of the presentation. 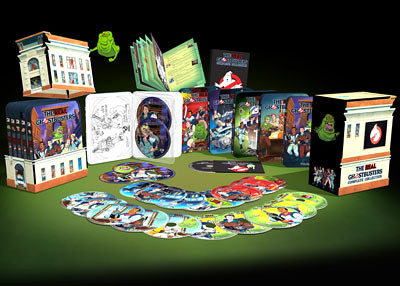 All griping aside, and getting to the gist of this post, is the tip-off from TV Shows on DVD.com that Amazon has just put up a pre-order for the Complete Series set.   Again, I did not see this coming.  Time Life has a history of sitting on home video releases for shows that they keep exclusive sales rights to, in particular the Muppet Show which was only available in hideously expensive two-episode single-disc editions for almost a decade.   I mean I was pretty happy towards the end of last year when they relented a little on the Real Ghostbusters and made the first volume of the series available to regular retail.  This news though is a coup, and hopefully it’s a sign that they’re willing to expand the purchasing options for shows they license.

The best part of this news is that Amazon is currently knocking $54 off the MSRP, making the set much more affordable at $126!  Even with the summer sale that Time Life has been running (taking $35 off the price to bring it in line with the cost of the Shout! Factory complete G.I. Joe and Transformers sets) this is the cheapest it’s been yet.  Yeah, I know what you’re thinking, it’s only a 30% drop, but doing the math, the cost per volume is roughly $25, which is a heck of an improvement over the original $36 per volume price.  Also for those of us that aren’t that interested in the final seasons of the show (the Slimer & the Real Ghostbusters years), this is a great way to subsidize having to pick those up as well.

The bottom line is that this move by Time Life was enough to win me over.   It’s still a dent in the checkbook, but it’s at least justifiable now…

Talking about some stuff I LOVE TO DEATH!