Joining up as a co-host on the re-launched Saturday Supercast!

Hey guys, just wanted to take a second and announce the re-launch of the Saturday Supercast podcast over at Sugary Serials.  This is a sort of secret podcasting project that I’ve been working on with Kevin Cross (comic artist and co-host of the Big Illustration Party Time podcast) and Jerzy Drozd (of Sugary Serials, MLaT Comics, and the Art & Story podcast.)  Basically we’re intending on creating a podcast that deconstructs cartoons much in the same way Tony and Ted deconstruct horror flicks over at the Horror Etc. show, or Ben and Dan do cult film over at Mondo Movie.  We’re going to try and set up a roundtable discussion that seeks to deconstruct the various cartoons we love, taking them apart and seeing what makes them tick; what works well, what doesn’t, and what it is we love about the medium.  It’s hopefully going to be a love letter to animation and what makes cartoons so great.

For the launch of this new format for the show, we decided to tackle one of the mainstays from our younger years, the first 5-part mini series of the G.I. Joe cartoon called A Real American Hero, which originally debuted on network TV in the fall of 1983.  This first story arc featured the introduction of the conflict between G.I. Joe (the codename for America’s daring, highly-trained special mission force) and Cobra (a ruthless terrorist organization determined to rule the world.)  This mini series effectively set the tone for the episodes that would follow, not to mention having a drastic impact on the decade of animation that debuted in its wake. 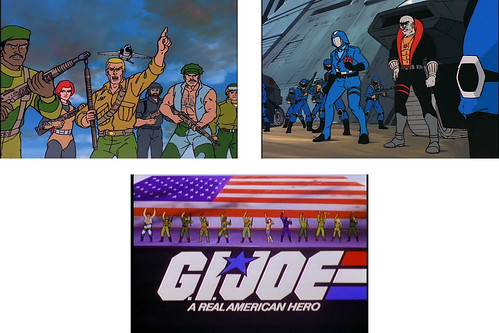 The cartoon was produced by Sunbow who also went on to work on other series like the Transformers, Jem, the Visionaries, and the Inhumanoids.  Though the title screens were left off for this mini series, the episodes talked about in this discussion include: 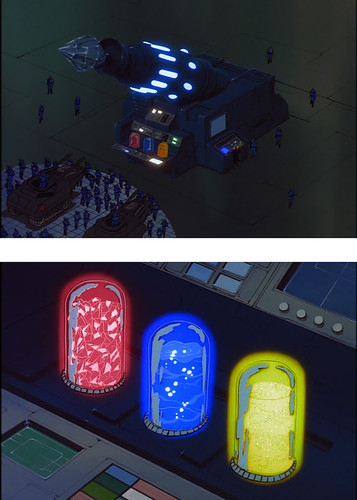 Part 2: Slave of the Cobra Master 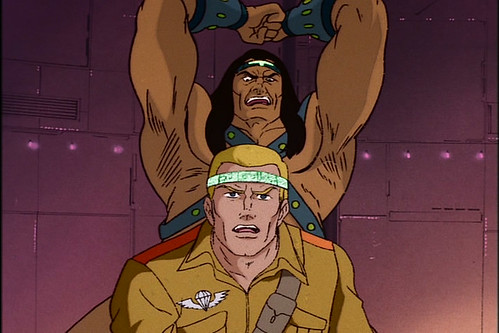 We also talk about the show’s theme song, Marvel Cartoon Productions and the G.I. Joe comic book series (including the origin of the animated series in the comic commercials), as well as the toys and file cards, Steve Gerber, Buzz Dixon & the G.I. Joe Writer’s Guide, He-Man and Star Wars toy commercials, Action for Children’s Television, a couple of the releases of the Mini Series on DVD (Battle Packs and the Shout Season 1.1 DVD), and backlit animation techniques.

We’re keeping the podcast’s feed over at the Sugary Serials site, so if you want to subscribe to it, you can do it over there or you can use this link.  I’m really excited to be podcasting again, and can’t wait to dig into more cartoons.  So head on over to the Sugary Serials and check out episode 19 of the Saturday Supercast today or you can download it by right clicking and selecting save here!

If you have any questions, comments, or heck, even complaints, you can drop us a line at Saturday Supercast!

8-Bit Christmas is the Fruitcake of 80s Nostalgia Novels…