Every trip down to Florida to visit family always has a sad but true ulterior motive which is to visit every possible 7 Eleven in a 30 mile radius in search of the perfect Slurpee.  I grew up a Slurpee junkie, and living in Georgia (which has no 7 Eleven stores) it tends to be a hard trek in search of a good substitute (see the end of this post for some of these.)  This summer though provided a fun opportunity to combine two childhood passions, Slurpees and G.I. Joe as the convenience store behemoth is participating in the mild hoopla over the new flick set to hit theaters in August…

Though I have little interest in the eventual film, I can’t help but love the branding and was really curious to see what sort of flavor concoction would be devised that represented a taste refreshing beverage as well as an almost 50 year old paramilitary toy/cartoon of action.  As a side excursion I was also looking for any Transformers junk I could find as I know 7 Eleven was promoting that turd of a film as well.

The search didn’t take long, in fact every single store I hit was splattered with G.I. Joe branding (though not quite to the extent of the Simpson’s craziness from a couple years ago.)  What was a little more difficult was finding a working dispenser for the G.I. Joe Slurpee flavor, Liquid Artillery, the blue colored treat that was supposedly infused with strawberry, pineapple and lime flavors.

It eventually took a couple days and stalking out to no less than five stores to find a working Liquid Artillery pump, and I have to say that the wait was really not worth it. 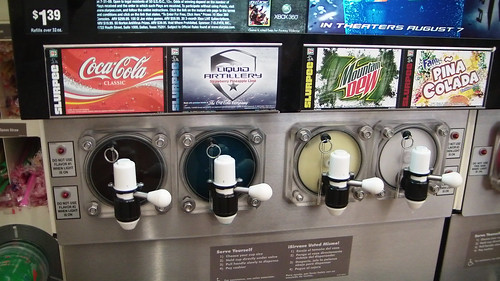 Here’s where I get (probably) unbearable with my Slurpee/G.I. Joe nerdiness.  On the one hand, being that this is a movie promotion, I was sort of disappointed in the choices made in the design.   I can see where they were going with the “True Blue” color scheme and the artillery theme, but I’m not a huge fan of the new Joe symbol (much preferring the flag inspired logo design) and considering the plot of the film I think there was a missed opportunity for a neater color.  I’m not sure exactly what the plot of the flick is going to be, but from the trailers I’ve gleamed that M.A.R.S. (Destro’s arms-dealing organization before he aligns himself with Cobra) has developed some sort of neon green metal decimating liquid or nano-bots.  That is what I was hoping to see in the new Slurpee.  Part of the reason for this, and jumping forward a bit, is the taste of this new concoction.  The strawberry, pineapple, and lime flavors mix kind of oddly and instead of it hitting the assumed fruit punch-like taste, it instead just plays off of all the tart and sourness of these fruit.  It ends up just blue and sour.  Though I don’t like it for its taste, it would have been interesting in the context of an acidic neon green Cobra weapon.  Granted, based on the movie toys that have been hitting store shelves, it looks like the Joe team will have some sort of anti-weapon that’s blue, but it’s just not happening for me.  Besides, having Cobra branding on the Slurpee would be ten million times cooler…

So the Slurpee itself was a bust, but I did enjoy some of the other aspects to the promotion, in particular the sturdy plastic cups that were covered with some fun lenticular graphics.   I first saw cups like this with the Incredible Hulk promotion from last year and the effect is great.   Not only does it call back to the lenticular coin promos from the 80s, it just makes for a really striking collectible cup.  Again, this is hitting me in another soft spot as I loved my plastic collectible cups from the 90s that you’d find at various fast food joints.  I was a bit too young to get on board with the Marvel Slurpee cups from the late 70s early 80s, at least in a keeping them capacity.  I even managed to find on 7 Eleven with some leftover Transformers cups in this lenticular style (which is even more fitting considering the history of lenticular stickers with the Transformers branding.)  Speaking of the TF promotion, the accompanying drink, a mango passion fruit combo, was light years better than the G.I. Joe Liquid Artillery flavor.  To bad I didn’t run into it until the last visit of the trip.

If anyone is interested, here are some of my previous columns on frozen drink fun:

And the winner is….

Table Registration is now open for the Up! Fair!

A Little Halloween in July!