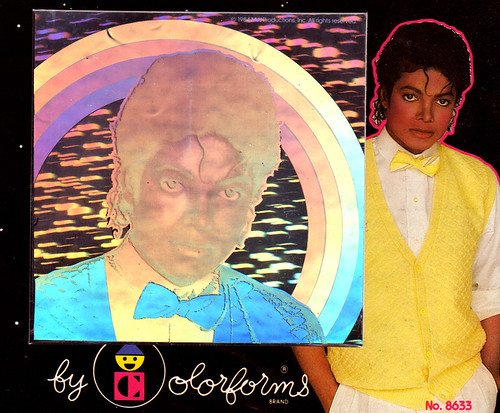 Michael Jackson.  Sigh.  To be honest, I don’t feel all that much in the wake of his death and it’s what I find the most surprising.   I was five or six years old when Thriller came out and it shattered my idea of what music was like a sledge hammer.   I know it sounds weird, I was barely in grade school, barely off training wheels, and my musical world was filled mainly with the Beach Boys and the Monkees.  I wasn’t old enough to be really be effected by a pop music album they way I was, but I was.  Every single song on that album crushed me at the time and it’s probably the only cassette tape that I played (or had my parents play in the car) for at least a year.  For me, when I think of Michael Jackson, his entire career took place between the release of Thriller and culminated in the insane popularity of We Are the World (the U.S.A. for Africa single) in 1985.   In those three years I memorized every second of Thriller, envied the kids who managed to get their very own crazy red leather jackets, bought and wore a gaudy off-brand white sequined glove, felt horrible for the starving in Ethiopia, was shocked at the hair-on-fire footage from that fateful Pepsi commercial, obsessed over the John Landis shot video for Thriller, and luckily had no idea that Jackson narrated an E.T. record book (and it’s way creepy.)

And for however influential the man was to me at five, I practically dropped him at eight.  This is what tends to happen when people become so popular that they transcend into another realm of pop culture existence.  They aren’t just popular, they truly become icons to some and idols to others.   Michael Jackson was so ingrained in the public consciousness, that nothing he did later, none of the stark raving craziness managed to seep into the illusion I had of the man when I was five, six or seven.   I hadn’t thought a lot about this until I read that he died.  Jackson is my perfect example of separating the artist from the art.   In a way, it’s almost like he died when I was nine.  He released Bad and he died, becoming a doppelganger that was doing all sorts of hideous stuff with his reputation and image.

Part of me is really getting sick of the massive amount of hoopla that is spewing all over the internet (I luckily don’t have cable and thanks to the new governmental anti-televised-terrorism regulations, I no longer get local signals either) that’s debating the worthiness of Jackson’s effect on the populace.  Is it a tragedy or is he not worth taking about?  Are the people profoundly affected by his passing soulless losers or are the cultural elite just snobbish pricks?  Hell I’m adding to it, but it gets back to the point that this is how deeply the man was rooted in out culture.  Michael Jackson was one of the last of the living crazy American gods.   He fits right in between Marilynn Monroe, Mickey Mouse, Elvis, Ronald McDonald, and James Dean as our culture’s answer to Jesus, Buddha or whatever god floats your boat.  Michael Jackson is Levi’s, he’s Kraft American Cheese slices, he’s Coke, he’s Ford, and he’s the Yankees.  He had a light side (insert obvious joke here), he had a dark side (insert slightly less obvious joke here), and his legacy is a series of life after death sightings, zombie jokes, obsessive attention paid to his kids, questions over the truth to the child molestation charges, an endless string of greatest hits releases, and at least seven more urban legends (perhaps involving his bones being interred with the Elephant Man’s in some dusty old museum in London.) 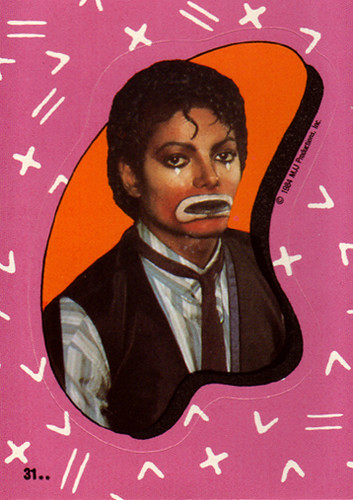 I think the above picture sums up how I feel about his post "We are the World" years.  You might also want to check out the rest of the Michael Jackson stickers in my collection by clicking here or the sad clown above…

PCP #3, There’s a little strange kid in all of us…

The Legend of Randi Bellisario

Oh, there was going to be blood…