I’ve got a special treat this week in the form of another reader supplied installment of Peel Here.   I actually have a couple of these in the hopper, but this one was practically written for me so it’s hitting first.  These stickers come from the personal collection of Jesse Guiher, a freelance artist & graphic designer (you can find out more at his site, Tigertailart.com.)  Jesse’s collection is pretty cool, and it’s housed in a pretty sweet Lazer Blazers sticker binder.   Anyway, I’ll let Jesse speak for his own collection (which will be italicized and I’ll pipe in here and there to give my thoughts, in bold, as well…)

It is a Lazer Blazer album, but I never put the actual blazer stickers in it (never really liked them even as a kid they seemed to lack the 3D element they were supposed to have).  I am a guy, but I have always liked fantasy stuff and never really liked the other lazer blazer albums that were at my local Kmart (though I would have killed for the Gremlins one) so I got the Unicorn one.  Never thought it would be a problem until I was around the other guys…needless to say I never showed it to anyone else again it was my secret sticker album from that point on. 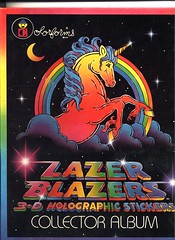 Since I missed out on the whole Lazer Blazer phenomenon to begin with I don’t have any of the baggage.   I do have to say that the thought of a Gremlins themed sticker album would be the bee’s knees though…

The very prevalent pink stickers are from a poster calendar kit that I had to go around door to door selling to raise money for our school in the 80s (plus the obligatory awesome thick double candy bars with almonds).  You will also notice quite a few praying hands and other little religious stickers.  These are from vacation bible school; you had to save up points by memorizing memory verses from the bible to get the "cool" stickers and they gave away these dumb little religious ones for everything else… well it was a sticker what else was I supposed to do with it?  You don’t waste stickers… so to make them "cool" I put them in upside down, like the cross in "The Exorcist" (yes I am aware of how stupid this sounds now but I was kid… its kid logic what do you want?). 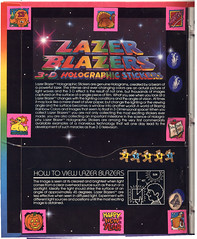 I really dig the Lisa Frank-esque dancing bears spelling out Jesse’s name on the inside front cover of the collection.

My favorite ones on here have always been the foil ice cream cones, there were a few other colors like pink/red but I am not sure what I did with them.  So far, aside from that there are a lot of valentines stickers from a hallmark pack and lots of scratch n sniff which were probably my favorite kind of sticker.  You can even see a Texas Ruby Red sticker I got off a grapefruit (hey it looked cool and it is a sticker… it counts right?) 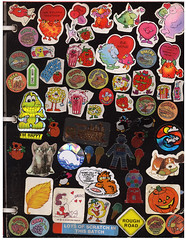 The grapefruit sticker is the perfect example of how there are no rules to sticker collecting as a kid.  Like I’ve mentioned in past Peel Here columns, I wasn’t above picking the descriptive stickers off of packages of meat in the deli section of the grocery store, as well as any and all produce stickers I could acquire.  In fact, just a few years ago I swiped an extra Great Pumpkin themes produce sticker off of a Halloween carving pumpkin because it looked so cool.   I also really dig the foil robot and various scratch-n-sniff stickers on this page (that salami one must smell something awful.)  The artwork on the vanilla sticker (in the bottom right) reminds me of MAD magazine style art (of which we’ll see a bit more of towards the end of the collection.)   I’m also fond of the monster valentines (which reminds me of these stickers I posted about a little while ago…)

Ah yes, Donkey Kong… the obsession that has permeated my life with old video games started with playing Donkey Kong on a family trip in a heat plastered 7-11.  Naturally I bought the card packs for both Donkey Kong and Pac-Man when they came out.  The cola scratch n sniff here was probably my favorite it really did (and still sorta does) smell like cola.  I love the foil embossed castle and hot air balloon, but they have always been a pain to maintain: they keep coming undone off the page.  The puffy highway signs on this page are glow in the dark (my second favorite type of sticker), but they were cheaply made and easily fell apart as can be witnessed by the two that fell off the page.  Grimace and Sam the Olympic Eagle sticker on the next page came from Mcdonalds of course; my dad used to work as a manager at our local Mcd’s in the 80s and I ended up with all kinds of bizarre happy meal leftovers.  I still wish I could track down the cool Atari giveaway scratch tickets they had, or even better one of the promotion posters for the giveaway.  That summer of desperately scratching off tickets (and finding out I wouldn’t be eligible to win anyways due to pops working there) is indelibly etched in my memory. 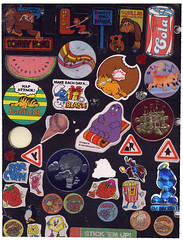 I love the Atari sticker card sets that came out in the early 80s (like these Donkey Kong stickers.)  Though I love my Topps sticker cards, I really love the idea of sheets of random themed stickers you could get in wax packs.  Just puts a new collectible spin on sticker trading and it provides a ton of stickers so you don’t have to be so choose-y when deciding to stick them (if you’re not planning on putting ’em all in a sticker book that is.)  Also, I have to second the love for the Mello Smello cola can sticker.  I really dig these over-sized scratch-n-sniffs.

More Donkey Kong, more Valentines, more scratch n sniff (plus a few homemade stickers, one of which is an ice cream soda).  I used to make homemade stickers by looping tape for the backs and sticking them down to wax paper, then selling them to my fellow classmates.  I got busted when my booming business branched out to selling pom poms for shoelaces and pieces of candy from packages, which ended with a trip to the principal’s office.  I personally really like the bright goofy space theme stickers here which were from a sheet package. 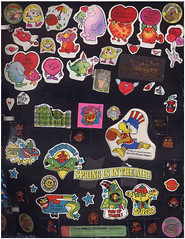 Honestly, I have to say that was pretty inventive of Jesse to make his own stickers back in the day.   I never thought to do that.  Oh and I totally feel your pain on getting busted for selling stuff at school.  I was also caught with a baggie full of individually wrapped Atomic Fireballs which I used to sell for a quarter a pop to sugar starved classmates.  Oh and those spaceship/alien stickers have a really nice Yellow Submarine vibe to ’em.

Some really cool foil prismatics of amusement park stuff (another life long obsession). More scratch n sniffs (these came on sheets that were so very oddly cut: there was no border they just cut a ling directly around each sticker so the entire sheet was completely used.  Each of these scratch ‘n sniffs came to a sheet with one scent, and I think 2 different sheets to a pack.  My favorite stickers of all time are on this page: the glow in the dark ghost stickers I found at Kmart on the turn rack next to the lazer blazers.  These things still glow like a champ when exposed to light and are very thick and durable, to my older graphic designer eyes I think they were silk screened onto laminated glow plastic.  They were more pricey than the other stickers, but I have always loved Halloween themed stuff and just had to have them. 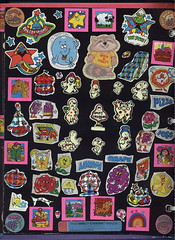 The please-post-bills-here! sticker is from one of the MAD card sets (as is the Don Martin sticker on the following page).  I remember thinking that these cats were unusually freaky looking, especially the orange one and the one with the children’s block (K is for "Kill"). 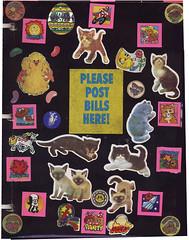 Care Bears… everyone was into them to one degree or another, they do have a certain charm even now but seem sickeningly sweet as well.  I still love these round fantasy stickers, I got them off a roll at Hallmark when they used to have this huge aisle of sticker rolls and you could go in with pocket change and get half a dozen.  I think that is the defining moment of when I fell in love with stickers: when I first went into the mall Hallmark and saw that aisle, that along with comic books and collector cards probably are what set me on my current path of illustration/graphic design. 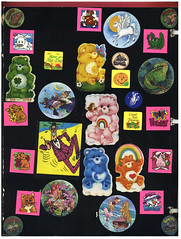 Super grape-ity scratch n sniffs, these grape snow cones are still very powerful smelling even now.  The original Kmart sticker is still on here in the upper right, it seemed strange to me to take off a sticker, even a price sticker in a sticker book so I left it on. 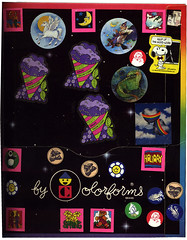 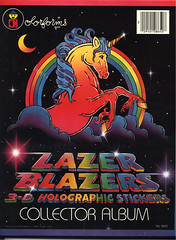 Well, thanks for sharing those Jesse. I always love getting a chance to take a look at other childhood sticker collections, in particular what stickers were deemed worthy of holding onto and in what order they’re placed in the collection.

Anyway, until next time…