**Updated**  Now it’s more or less official that the Transformers cartoon is being re-released on DVD in June.  The Amazon listing went up, and there is better artwork floating around the internets.  Hopefully this bodes well for the rest of the series and G.I. Joe to boot!  I’ve also updated the big list of 80s cartoons as well…

Sigh, this is what I get for trying to play the system and be all proactive/penny pinching/business smart about my 80s cartoon collecting hobby.  Three years ago I managed to pick up four of the five out-of-print Rhino released Transformers DVD sets for $80 at a used DVD store.   I was ecstatic because when Rhino first started putting these out they were asking upwards of $60 per set, and they easily sell for almost $80 a piece on eBay.  Personally I think that’s a bit much to ask for an 80s cartoon on DVD, so finding them at $20 a set was awesome.  Then the Transformers movie was re-released on DVD, and an ad in the special features announced that Sony was going to re-released the original cartoon on DVD.  This is where I fudged the bucket.  Basically I was looking at either picking up a used copy of the 1 set I needed to complete my set for around $80, or I could sell the 4 sets I had hoping to make $300-$400, pick-up the new sets for around $150, and I’d make a profit that I could put into Branded.  I bit the bullet and sold the 4 sets, and invested in a sticker collection, which eventually became great content for the Peel Here column.

Of course, then Sony backed out of releasing the cartoon, and it’s been a gaping hole in my 80s cartoon collection ever since.  A week ago I really wanted to watch some of the old episodes again, and I was sitting on an unused Amazon giftcard, so I figured, what the hell, I’ll pick up the out of print 1st season again.  I just got the set in hand yesterday afternoon, and guess what I find in my inbox this morning from TV Shows on DVD.com!?! 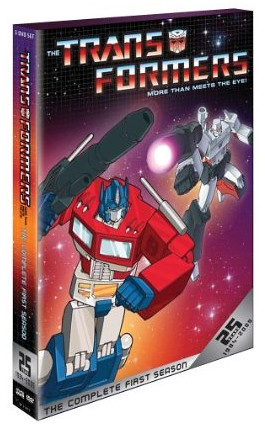 Damnit!  My timing couldn’t have been worse.  Oh well, if this news pans out, hopefully we’ll see the complete series released on DVD again in the near future, and maybe, just maybe we’ll see some new releases for G.I. Joe (which still has yet to be fully released on DVD), Jem, and other Sunbow properties.  Le sigh.

Peel Here #44, Who ya gonna call…why yourself, after this easy 10-step course…

Craft ideas from the Last Man on Earth…