Though I don’t partake in them all that often, I have to say that I’ve been fascinated with fast food restaurants ever since I was a kid.   I think my interest stems from the fact that my parents hardly ever took me out to them (with the exception of Long John Silvers that is), so when ever I did find myself standing under the golden arches (as a fer instance) it was exciting.  Add to this the allure of meals constructed specifically for kids, and the tantalizingness (should be a word) was pretty darn high.  In the last few years the heated competition between the various franchises has led to some interesting and weird menu items, as well as some odd market strategies.  In fact in the last month the whole recession frenzy has seemed to kick this into high gear.

This past February while the wife and I were in Florida on vacation we stumbled into a local Steak ‘n Shake at a particularly opportune time as that location’s manager was giving his entire crew a dressing down/pep talk for the coming year.  Actually the whole experience of having this crew meeting right next to our table was just as awkward as it was exciting to overhear some insider SnS secrets.   Between coming down on the employees for wearing slightly off-white dress shirts and crooked bow ties, the manager shared some interesting facts that I never really thought about, foremost of which was that Steak ‘n Shake was going to debut a new fried fish sandwich during Lent to try and draw in the Friday-meat-fasting religious sect.  I suppose it makes perfect sense, but I never thought of a fast food chain debating the merits of arranging their menu according to religious convictions in order to squeeze out a little more profit.  In the same breath the manager also remarked on how this was going to be a banner time for the franchise as it was a anniversary year and that there were going to be a ton of coupons for months to come.  I have to wonder if there will be fish sandwich coupons, and if so are they going to be geared towards a Friday redemption?

Also discussed during the meeting were other new menu items and the one that I thought was kind of weird were mini-steakburgers.   From the way the manager described them, the mini-steakburgers were going to be the equivalent of White Castle or Krystal burgers, only fried with hand formed patties (instead of steamed & pre-formed.)  Talking it over later that morning with my wife I had to wonder why the chain decided to take a shot at a couple of franchises that didn’t really seem to be competitors, but we came to the conclusion that it was probably not so much that as it was a way for them to horn in on the whole $1 menu craze that’s been reshaping the overall menus at most fast food places in the last decade.   In fact I remember when Steak ‘n Shakes first started popping up in our area back in ’93-’94, and the one complaint that I kept hearing was how expensive they were compared to other burger joints.

Of course in a weird coincidence (or is it?) on the way home from vacation, we stopped at a Burger King in north Florida and low and behold the hot new menu item were the new BK Burger Shots!  More mini burgers (and mini breakfast sandwiches to boot) from another chain that didn’t seem to need to compete with Krystal and White Castle, and one that has been doing the $1 menu thing for awhile.  What is it about small food right now that is so attractive to fast food chains?  I was mentioning the Burger Shots to a friend the other day and he seemed to remember Burger King having a similar promotion back in the 80s that he was obsessed with.  Basically he loved getting small food as a kid just for the novelty of it.

I have to wonder how long it’s going to be before McDonald’s gets into the mini hamburger business?  I thought they already had as I decided to swing by my local house-that-Ronald-built, and saw that the double cheeseburger had been replaced on the dollar menu by the mysterious McDouble.  I was surprised to see the regular double cheeseburger back on the regular menu for $0.19 more, so I hit the internets to investigate.  Turns out the McDouble is practically the same burger, only with one slice of American cheese instead of two (according to mcchronicles.blogspot.com.)  Again, I have to wonder what the strategy is in a case like this.  How does offering the same burger twice on the menu, one being a square of cheese heavier granted, score you more profit?  I suppose a million McDoubles = a million slices of cheese saved.  What does a cubic mile of fast food grade processed American cheese go for these days? 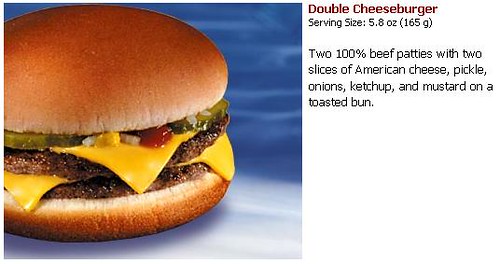 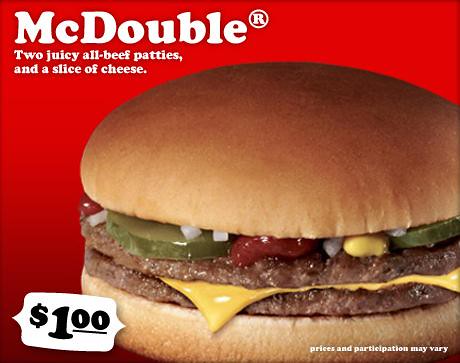 Also, I hesitate to link to the McDonald’s site as it’s loud and obnoxious, but I’m intrigued by the weird cartoon skits on the dollar menu portion of the website.  Is that H. Jon Benjamin doing voice work for them?

I’ve been trying to think how other fast food joints have tried to finagle the public into picking up their weird new menu items, and I came up with the following list of stuff that I think has been strange:

The square breakfast biscuits at Wendy’s…

The Arby’s Roastburgers (which are just roast beef sandwiches with lettuce & tomato, and slathered with a miscellaneous “roasted burger” sauce…) 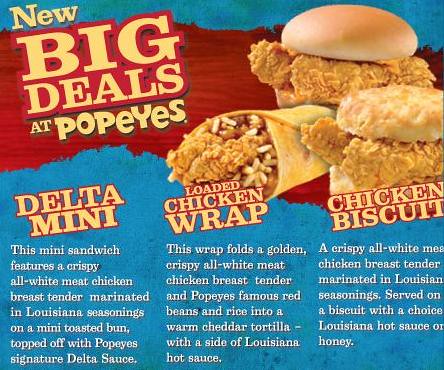 Any other weird Fast Food menu items mystify you guys?