Hello all, sure has been awhile huh?  Guess it’s about time I updated the blog and brought it into the new year, though I haven’t been completely neglecting the site as you can see from the slight facelift I’ve given it.  I’m still pretty dense when it comes to website construction, so I’ve been slowly tinkering with the code in hopes of getting this place shaped up into a slightly less messy place to visit.  Call it pre-spring cleaning, except all the content is staying put, I just took some time to put a fresh coat of paint on the walls.  If nothing else, there is no fear of stabbing yourself accidentally on the old horribly sharp and generic header I used to have… 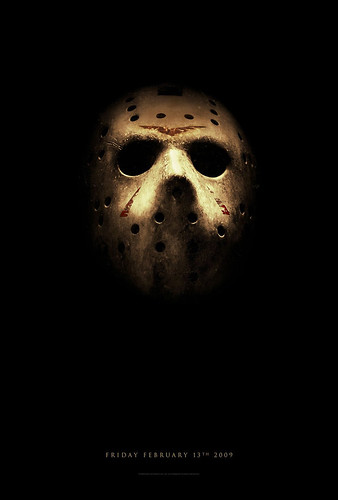 Anyway, on to the topic of conversation I wanted to get to today, the remake/reboot of Friday the 13th, which I saw this past weekend with my wife.   Granted it’s not on DVD yet, but it will be so I figured the best place to store it on Branded would be in the Buried column.  It was sort of a weird experience as we decided to catch an evening screening (we typically only hit the theater before noon on the weekends to take advantage of the half price tickets at our local AMC), and we don’t usually watch horror flicks in the theater since my wife really isn’t partial.  She bit the bullet though as we had a free ticket courtesy of the pretty interesting Friday the 13th DVD documentary His Name was Jason.  I was expecting the place to be crowded as it was a Saturday night and we were seeing a relatively popular flick, but our screening was only about 1/4th full.  I was also hoping to have a decent audience as it’s always more fun to see certain flicks (like comedies and horror movies) with a bunch of people who get into the screening, but we were plagued from the audience from hell.  Through the entire running time of the film the teenagers that were in the room with us kept playing musical chairs.  The ones that weren’t seat hopping kept getting up to leave for five minutes at a time before stomping back in.  Needless to say it was hard to get into the movie what with all of the ADD addled kids about.

As for the film itself, I was sort of happily surprised and disappointed all at the same time.  I’m not a diehard Jason fanatic, and though I love plodding through the first 8 Friday films from time to time, I’m not particularly bothered by the idea of a remake or reboot, or whatever they hell they want to call this new flick.  In fact the one thing I kept reading going in was that the new movie squishes aspects of the first four Friday films into one plot, which seemed like a good idea and it boded well for the idea that the filmmakers might ditch the horrible 40+ minute lead up most of the originals employed.  I mean when you get right down to it not that many people are probably watching a slasher film for good character and plot development, at least not a series like the Friday films.  Actually, I think character development is a great place to start talking about the new flick.

If there is one thing that I don’t envy about the process that sequel and remake writers/directors must go through, it’s the balancing act between giving the audience what it’s looking for while also trying to put an interesting spin on an old story or concept.  I mean how many times can we see Jason kill a bunch of camp counselors before it gets boring?  In particular when dealing with a weirdly iconic character like Jason Voorhees, how do you paint him from a different angle?  He started out as a deformed "mostly-drowned" child/hallucination, shifted into a fully grow potato sack wearing inbreed hillbilly, took a side step into hockey mask stealing stalker, and eventually graduated into becoming an undying soulless zombie maniac (do we even need to envoke his cyborg years?)   He’s been mother obsessed, self obsessed, Corey Feldman obsessed, a disgruntled pawn of Freddy Kruger, and yes, okay, he was even shot into space.  What’s interesting to me is that throughout all of this Jason has managed to stay pretty static character-wise.  Sure, he’s put into new situations from time to time, taken a stroll through Times Square, spent some time as a demon worm, an even been a guest on the Arsenio Hall show, but he’s pretty much the exact same mute coveralls-wearing lovable mug.   The Jason I grew up with took the concept of Michael Meyers from the first Halloween film and brought it to a whole new level.  He is the boogie man, a mostly faceless killer who acts out of pure fanatic revenge at first and later on out of a meaningless impulse.   He’s not of this world; he lives in the shadows and pops up totally unexpected from out of no where with an almost teleportation-like quality.   He serves at the ultimate punishment and the consequences of walking the wrong path, and he has no needs.  Hunger doesn’t deter him, money won’t stop him, and he won’t even bat an unleveled eye at a half naked woman.  So as a part of the filmmaking team for the new flick, how do you deal with the character’s iconic status?   Where do you deviate, what past character traits to you pay homage to or resurrect?

Well in the case of the new film, the creators decided to develop Jason’s character, enough so that the new incarnation only resembles the tried and true icon.  Underneath the hockey mask is a new Jason, one that I personally don’t care all that much about.  The problem I have is that the new Jason thinks too much.   He’s painted as a monster with plans and day to day rituals, a man with needs, preferences, and dare I say it feelings!  The filmmakers have made him the worst kind of being, a human being.   In the new flick Jason has an underground labyrinth home base; a series of dugout tunnels where he keeps an odd assortment of baubles and junk.   I don’t know about any of you, but the Jason I grew up with has no time to amass a collection of anything, even disturbing rotting junk.  The new Jason is so won over by the sight of a girl who looks enough like his mother that he not only hesitates in killing her, but he abducts her, keeping her captive in said underground lair.  On the surface this isn’t all that beyond the scope, but when you stop to think about it for even a minute it flies in the face of what the character is capable of.  Hostages kept for any length of time need to be fed, they need water, and they need a place to poop for crying out loud!

On top of this the filmmakers have instilled an odd intent into the new Jason, leading him to set traps for his victims, keeping them pinned down so that he can come back to them later.   The new Jason isn’t the unstoppable force of nature he used to be, but more of a plotting, scheming, opportunist.   I guess in my mind, when you’re dealing with a character as iconic as Jason (yet not as old-as-the-hills like say Santa Claus), it doesn’t make a whole lot of sense to humanize him.  Though I haven’t seen it, I think Rob Zombie did something similar with his iteration of Michael Myers from his Halloween remake.  I don’t need to identify with Jason as a character, I just need to be poop-in-my-pants scared of him or rooting him on as he kills annoying kids.  Even though I think the intent of making the character (in the new flick) relate-able was to up the disturbing factor, it just didn’t work for me.

Part of the problem for me is Jason’s antihero status from the original series of films.  Though the first film is 98% without the character, it’s set up in such a way where the viewer doesn’t really bond with the camp counselors, not to mention the fact that so many of the kill scenes are shot from the first person perspective of the killer.  It trains us to anticipate and eventually begin to enjoy the slaughter.  In the third film the main characters take on such underdeveloped stereotypical roles, that they serve as nothing more than lambs to the slaughter, deaths we just can’t wait to see soon enough.   By the fifth film we’re no longer watching for plot, and by the seventh Jason might as well be playing King Ghidorah to Tina Shepard’s Godzilla!   What I’m getting at is that half of the fun of Jason is rooting for him (or against him in either Part 7 or Freddy Vs. Jason), and it’s really hard to get behind his character in the new flick because he’s more real, and well, to be blatantly obvious, he’s killing people.  I know how stupid that sounds, but think about it for a minute.  As viewers, do we ever root for the three psychos in Last House on the Left?  Do we really want to see Laurie Strode lose to Michael in Halloween?  Do we really want to see the demon Pazuzu for Regan to masturbate/stab herself with a cross in the Exorcist?  Hell no.  But we do want to see Jason slaughter a bunch of braindead kids, and in order for this dynamic to work, I think his character needs to be as inhuman as possible (to the extent of making him a zombie in the later films.)

By this point I’m sure you’re asking yourself how I could have simultaneously been happily surprised with the flick.  I guess my biggest fear going into the film was that it was directed by Marcus Nispel, the same guy who brought us my least favorite horror film of all time, the remake of the Texas Chainsaw Massacre.  I don’t really want to get into that flick, but I will say that I absolutely adore the original film, and the remake missed the point of its predecessor completely.  I don’t particularly care for the trend in modern horror of making the genre so damn mean.  Be it torture porn (Saw, Hostel, et al), or flicks like Severance (that take interesting and fun characters, let you get to know them for 40-50 minutes, and then force you to see them killed in a sadistic and just downright mean fashion), I just have a hard time relating to this generation’s horror.   I expected the new Friday the 13th to be just more of the same, and I was completely surprised by how well Mr. Nispel nailed the tone of the original series.  There’s a little bit more of each of the trademarked elements for sure (more T&A, more annoying characters, more gore, etc.), but it really works as a whole.  Believe it or not, even for the faux-Jason, the film is fun to watch.  Go figure.  I wish I had more to say about it, but it’s really just refreshing to see a flick like this and enjoy myself in this day and age.

Time for … Sindge the Burnt Cheez-It?

I hate it when a plan doesn’t come together…

These Should Exist: The Rad Edition