I’ve been on a John C. Reilly kick lately, and this past week I sat down and watched the flick The Promotion (written and directed by Steve Conrad.)  I wasn’t expecting to really connect with the film at all as it’s sort of set up with a pretty standard comedy plot and stars Seann William Scott (he of Stiffler fame from the American Pie movies) who I’m not all that enamored with.  Honestly, I was expecting to enjoy Reilly’s performance, a few jokes here and there and that’s about it. 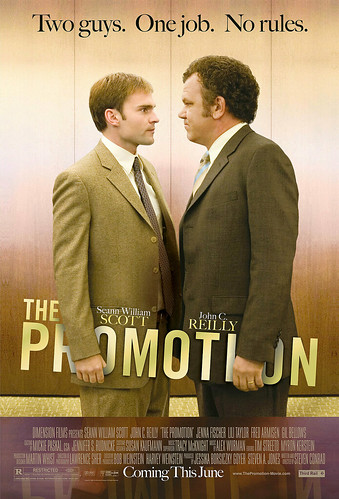 Part my initial disinterest was that the flick seemed to be drawing from the same cultural ennui of flicks like Waiting, Office Space and more importantly Clerks.  I experienced Clerks at the perfect age, 19, right smack dab in the middle of my initial career as a grocery store stock clerk and budding film buff, and connected with it in a very visceral way.  For my money Kevin Smith totally captured what life was life like for a 20-something pop culture nerd working in retail, whittling away the hours with humor as the world (customers, supervisors, family, etc.) slowly sucked away at your soul.  Well, with a lot of genres (sub-genres, sub-categories, what-have-you) it seems like there are one or two films that do a great job of addressing the particular subject matter, and thereafter other flicks just seem to be watered down imitations or parodies.  For me, in the minimum wage lackey category of comedy films, Clerks stands head and shoulders above the rest (with a nice honorable mention to Office Space, even though it deals more with corporate misery), and after watching flicks like Waiting or Kill the Man I was getting kind of tired of the genre.  When I saw the trailer for the Promotion, I was expecting just more of the same.

Actually, I think part of my disinterest lies simply with the fact that I’ve moved on from that time and place in my life.  I’m over ten years older, working a slightly more rewarding office job (I still emotionally connect to Office Space just fine thank you), and I’m less interested in wallowing in sarcastic hopelessness, preferring a bit more upbeat fare (in general, not as a rule.)  Again, watching the trailer for the Promotion, which revolves around two grocery store assistant managers vying for the coveted store manager position at a new location, I was expecting to be less than engaged by the plot.

For the first half of the film everything was going exactly as I figured.  I was really enjoying John C. Reilly’s Richard Wehlner, there were a couple of really funny jokes (in particular a handful about an annoying banjo teacher/gay dominatrix type), and a few surprising cameos (in particular by Jason Bateman and Bobby Cannavale.)  I was actually a little surprised that Seann William Scott didn’t bug me all that much (something I also noticed in the flick Southland Tales), though there wasn’t anything particularly engaging about him either.  Then, as the rivalry between Reilly and Scott started to heat up a bit I found myself wanting the film to side-step the clichéd plot (where one of the two would take on the role of the villain and you’d start rooting for the other by proxy) and veer into more uncharted territory.  The weird thing is that it did.

I as mentioned before, the film stars Scott as Doug Stauber, who is an assistant manager at a grocery store chain located in Chicago, and along with his wife (played by Jenna Fischer) is just trying to make a go of life in middle class America.  Figuring on being the shoo-in for the Store Manager position at a new location under construction, the couple decides to take a chance on buying their first house.  At the same time, Canadian transplant Richard Wehlner (Reilly) (and his family, including his Scottish wife played by Lili Taylor), also an assistant manager (though for a chain of Canadian sister stores), and a recovering drug addict, transfers to Chicago putting Stauber’s "shoo-in" status in jeopardy.  As the bigwigs descend on the store to check up on Doug and Richard, each end up dealing with their own demons, be it a gang making life on parking lot duty hell, the possibility of slipping back into depression, alcohol and drugs, or their need to get ‘promoted’ in order to grab a hold on their life.

Though the film is mainly a comedy, it manages to avoid some of the more obvious or gratuitous plot machinations, and pretty much plays the jokes in a subtle manner (even the more outrageous humor isn’t in your face.)  The flick manages to balance the gags with plenty of introspection and does a surprisingly amazing job at illustrating a more real-life struggle for success.  This is what kills me about most movies where the characters are always shooting for the stars, where success is defined only by achieving what in the long run only a very few people can.  Don’t get me wrong, I’m all for striving for greatness, but I’m also content in not shooting myself into the cosmos.  Becoming an amazing success is wonderful, unless the trip there and beyond is horrible.  Anyway, about halfway into the film I started hoping for a particular outcome, and was surprised when it occurred.  Where Clerks deals with the grind of working a Middle
American job with sarcasm, apathy and slack, The Promotion deals in hope, duty, and a positive work ethic.  It’s the other side of the coin, and sort of the next logical step after a film like Clerks (which is sort of where Smith was going with Clerks II, just without the goofy dance sequences, inexcusably ignorant fanboys, and donkey sex.)

Branded in the 80s is…done.

These unofficial trilogies are Officially Awesome in my book!