Peel Here #81, Might solve a mystery, or rewrite history!

I’m sure I’ve written about this before, but one of the aspects I love the most about pop culture is how I can chart the time line of my life by what was bouncing around my skull at the time.  Back in the late 80s, early 90s, my family was going though a lot of changes, mostly geographically, taking us from Florida to Massachusetts, then to New Hampshire, and eventually back down south to Georgia (all within a one year period.)  This was a tough time for me as I was always in flux, leaving behind best friends and family, jumping into new climates (in particular dealing with snow for the first time in my life), and continuously changing schools (as well as going from middle back to elementary because the programs up north had 6th grade as part of elementary.)  The only constant in my life at the time was my love for and addiction to the DuckTales cartoon.  Actually it was DuckTales and the movie Willow as my mother was also in a weird place, and we ended up watching Ron Howard and George Lucas’ under appreciated fantasy flick almost nightly.

For me, sitting down in front of the TV and hearing the opening synthesized drum beats from the DuckTales theme was like a warm blanket and a cup of chicken noodle soup.  There was nothing more comforting at the time than watching Huey, Dewey, Louie, Doofus, Uncle Scrooge, Duckworth, Webby, Ms. Beakley, Launchpad, Gyro, Gizmoduck, and Bubba the prehistoric cave duck battling the likes of Magica de Spell, Flintheart Glomgold, the Beagles Boys, and El Capitan (from the original miniseries.)  It was always a treat when Donald duck would make an appearance, getting some shore leave from the Navy to spend some time with his nephews.

The below sheet of stickers was released in 1986, though I’m not sure if it was part of a Hallmark set or if it was just distributed by Disney (or a subsidiary) in other retail outlets… 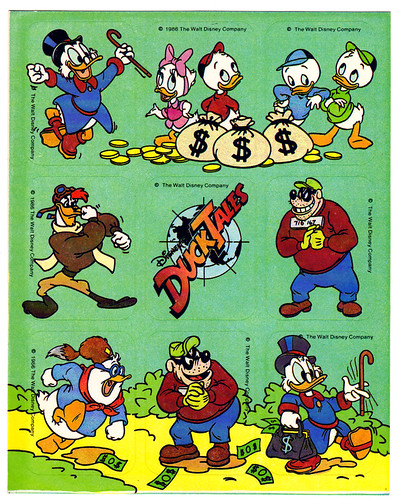 Aside from ditching one of the Beagle Boys in the set above (and replacing it with a Magica de Spell sticker) I think this sheet does a nice job of representing the main characters of the show.  I was surprised to see Doofus getting some love here as he was pretty annoying, though I’m not sure who he’s be replaced by.  I love Gryo Gearloose, but I’m not sure if he was a fan favorite, and I’m not surprised there isn’t a Ms. Beakley sticker.  Gizmoduck would have been cool, but this sheet was printed before his appearance on the show.  Actually, I’m sort of surprised there wasn’t a Flintheart sticker as he is more or less the main villain of the show, at least in terms of being Scrooge’s nemesis.

Getting back to the show itself for a second, Ducktales, the second Disney cartoon released in the 80s (after the Adventures of the Gummi Bears), and the first of their syndicated fare (which would be followed by shows like Rescue Rangers, Talespin, and Darkwing Duck throughout the 90s) is probably the best written and executed of the various Toon Disney shows (at least IMO.)  Also, the revamp of the Duckberg characters was probably the most subtle of the various Disney chartoons adding hints of Indiana Jones’ adventures to spice up the shenanigans of the greedy Scrooge and his mischievous nephews (as opposed to throwing a bunch of the Jungle Book characters into the odd air pirate setting of Talespin, or making Chip and Dale into makeshift MacGyver’s in a Wings sitcom setting.)

For me, DuckTales marks the end of my afternoons watching more or less realistic action cartoons after school (like Transformers, G.I. Joe, Thundercats, Silverhawks, and Bravestarr), and the shift into more cartoony action/comedy fare (like Tiny Tunes, the Disney Shows, Animaniacs, and Freakazoid.)  Luckily the show has begun to be released on DVD by Disney (there are currently three volumes containing 75 of the 100 produced episodes, including the original mini series, available), though the sets are a bit lacking.  The episodes are out of order, and currently there are no plans to release the final 25 episodes of the show, which is kind of a shame, though if nothing else, the sets are pretty cheaply priced.

Peel Here #90: I’m only pretending these stickers are gay so my webhosting company doesn’t evict me…

Day 7 of the Halloween Countdown: Wwwwwiiiinnnnsssstttttooooonnnn!