Day 23 of the Halloween Countdown: I wonder when the first edible full-body costume will come along?

Well, this certainly is the week from hell (as far as the day job goes.)  I can’t wait for tomorrow to be over because I’ll then be on vacation until the end of October.  Anyway, I hated missing yesterday’s posting, but thems the breaks.  To make up for it today, I’m going to take a second to talk about the craziest piece of Halloween candy I’ve found this year, and possible ever, the Tricky Treats Mask Pop from Brand New Products, LLC! 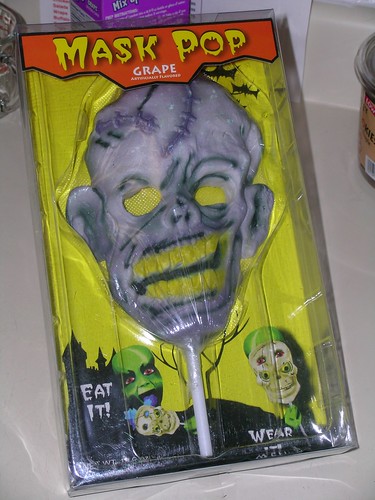 When I saw this on the shelf at my local Wal-Mart I just about crapped myself with a mixture of awe and fright.  Sure, we’ve all probably seen the giant rainbow colored confections that the Lollipop Guild carried in the Wizard of Oz (a lollipop that is also a staple of the Walt Disney theme park experience), but this Mask Pop sure beats those other suckers bloody.  This insane piece of candy clocks in at just under a pound (at 13 ounces/369 grams, 330 of which is sugar) and has 1400 calories! 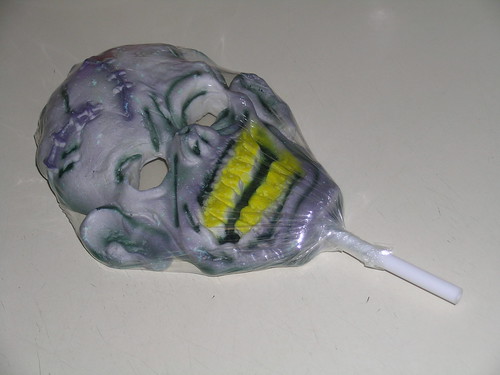 Health hazard aside, this is an ingenious product that borders on the sadistic for sucker enthusiast and the parents or loved ones of said enthusiast alike.  It’s as if one of Homer Simpson’s world-made-of-candy daydreams came to life Halloween-style.  I mean what kid wouldn’t love traipsing around the neighborhood on All Hallows Eve, knocking on doors, and screaming out "Trick or Treat" from behind one of these delectably gruesome masks, scaring poor old grandmothers and strong-arming them into giving them sweets, and then, when the night of greedy debauchery is through, getting to eat your own Halloween mask?!? 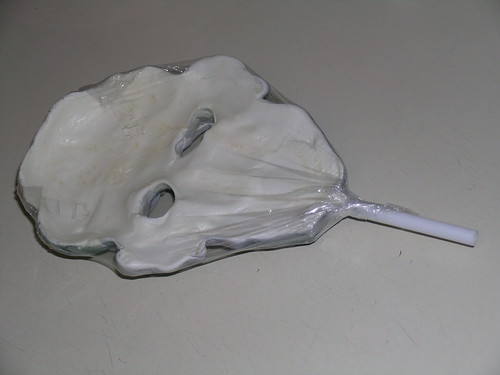 Now I did mention that this awesome mouthful-of-cavities-waiting-to-happen is sadistic, and here’s why.  Being that it’s a mask made out of candy, as soon as you unwrap it, it’s almost impossible not to make an exploratory lick.  Bust even the slightest bit of moisture near this giant lollipop brings out the sticky, so even if a kid could resist nibbling on an ear, their warm breath trapped behind the mask will certainly make it one giant mess.

I was kind of skeptical about this whole deal, even thorough my near-bowel-moving excitement, as it just seemed too good to be true.  I feared that the pop itself would taste disgusting, if not just bland, and I wasn’t sure how well it would work as a mask.  There were a few varieties to choose from including a cat-like demon, a pumpkin head, a witch, and a pretty frightening clown, but this zombie pop is the one that really sang to me.  Besides, a lot of the other pops tended to have the mask eye holes separate from the design of the face (so there were effectively two sets of eyes to the mask), and this zombie was a nice combination of form and function with only one set.  When I got home immediately ripped the pop out of the plastic packaging and had my wife give it a test drive.  The verdict?  This is one creepy-as-hell mask! 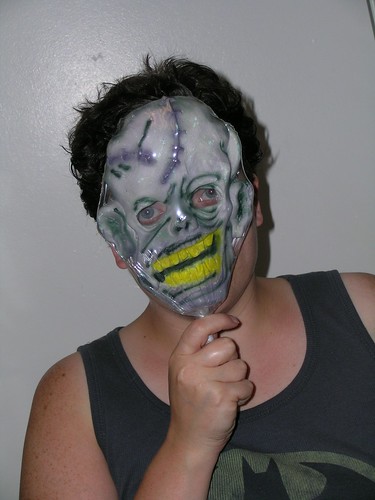 As far as the edibility factor goes, it was surprisingly great.  The zombie pops are grape flavored and it was quite tasty.  There’s no way in hell I’d ever eat the whole thing, but I nibbled off an ear and chipped off some sticky goodness here and there.  What’s kind of funny is that the mask only gets more and more disturbing the more little bits you eat off of it.  This is an amazing piece of candy, though it is pretty damn unwieldy, especially after you start eating it (there really is no going back from that point…)

Craft ideas from the Last Man on Earth…

What would Optimus Prime do? You Decide!

WKRP is back on the air, sort of…