So if the fact that I’m doing this Halloween countdown weren’t enough of an indication that I love the season and horror themed entertainment in general, I just have to take a moment to say that I love the scary.  Ever since I was a little kid I’ve been infatuated with the macabre, be it grotesque Garbage Pail Kids artwork, the array of insane Halloween masks that used to be on display at Spencer’s in the 80s, the addictive VHS covers to all the horror films at my local video store, and especially in the fiction I chose to bury myself in.  I’ve written many times of my love of the Crestwood Monster Series in past countdowns, and when I started ignoring chapter and Choose Your Own Adventure books for more adult fare it was Stephen King that I first picked up (around the time I turned 12.)  Another example of some ghoulishly fun reading that I did when I was younger is a short series of books starring a character named Samantha Slade.  I mentioned the series a couple years ago in passing, but I thought I’d take a second today to look at the books a little closer, in particular the wonderful cover art by the very talented Jody A. Lee.  The series was published between 1987 and 1988 by Archway Paperback Pocket Books, a division of Simon & Schuster, and was written by Susan Smith (an author who I haven’t been able to find much information about.) 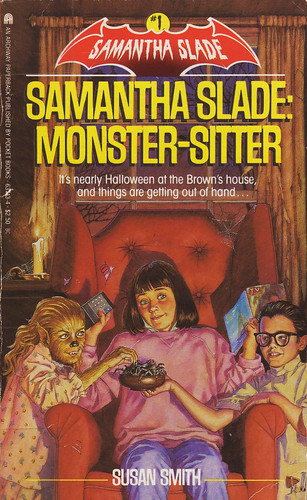 Of the series, I must have read this first installment (SS: Monster-Sitter) the most (at least 10 times if not more) since my mom picked it up for me in 1987.  The series was probably cashing in on the craze of the Babysitter’s Club and the rest of the book series in that ilk.  I certainly wasn’t against dipping into series that were more or less meant for the other gender (I loved the more girl-centric Judy Blume books for example), but what really grabbed me wit this series was its creepy theme in that Samantha is a babysitter for what amounts to an amalgam of the Addams Family and the Munsters.  Basically, Samantha plays Marilyn to the Brown Family’s monsters, spending the majority of the first book unaware that the kids she’s sitting for are actually monsters (believing that the family is just eccentric to a T.)  Between heading up the planning committee for her school’s annual haunted house, taking on this new babysitting gig, and trying her darnedest not to embarrass herself in front of a boy she has a crush on, Samantha just doesn’t get a break.  With the help of her best friend Iris and some unexpected aid from the Brown kids (Lupi, a real life werewolf, and Drake a mad scientist in training) she manages to pull everything together and put on a legendary haunted house party.

One of the aspects of the first book that’s always stuck with me is all the crazy food that the Browns (an unbeknownst to her, Samantha as well) consume including crunchy spider’s legs (seen on the cover above.)  There’s a scene in the book where the Brown kids help Samantha make burgers out of, well, it would be indecent to say. 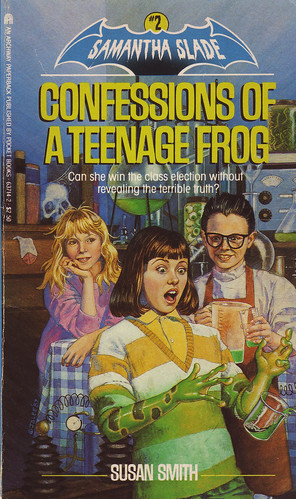 As far as the rest of the series goes, I wish I had found them when I was younger.  Though I loved the first book to death I never found any other entries in the local used and new bookstores around the central Florida area.  There was an ad in the back of the first book which teased me with and informed me to look out for the second installment, Confessions of a Teenage Frog, and for years I was curious about the continuing adventures of Samantha Slade.  It wasn’t until the amazing gift that is the internet that I’ve managed to track it, and the rest of the series down in the last 10 years.  Confessions picks up where the last book left off with Samantha now the permanent sitter for the Browns.  While attempting to run for class president she partakes in Drake’s “Greatness Formula” which does little for the campaign, and in fact turns her into a frog.

In the third installment, Our Friend: Public Nuisance #1, Samantha is introduced to Lupi and Drake’s pet dinosaur Bubbles.  Drake invents an invisibility formula that makes Bubbles disappear, but he escapes the starts ravaging the town.  Samantha has to snap to action to corral the dinosaur and keep him safe from the nation guard and the angry townspeople as the invisibility formula begins to wear off. 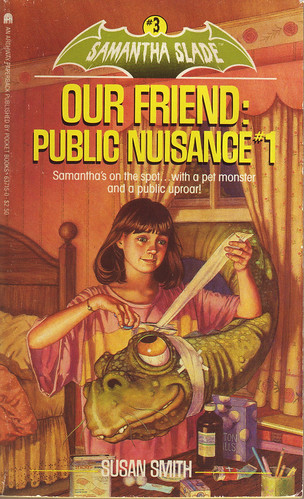 The last installment revolves around Samantha and the kids starting up a band (called simply enough Blood) and entering into a battle of the bands.  This is probably my favorite cover in the series as the realization of the band in full glam/glitter rock glory is awesome… 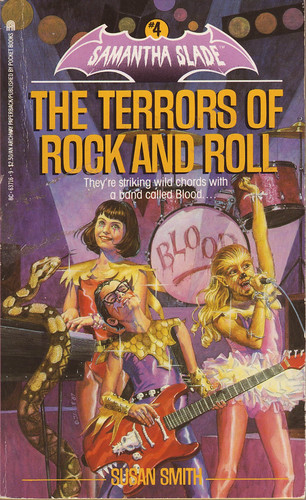 I think these hold up pretty well, and aside from the questionable first person perspective (it gets old having Samantha explain and give internal commentary on everything), I was surprised at how enjoyable it was to read through them.

Day 17 of the Halloween Countdown: More gummi than you’ll need ever!