Day 10 of the Halloween Countdown: The background makes the cel…

Well, today wraps up a week-long look at my collection of animation cels from the Real Ghostbusters cartoon, an even though I’m not familiar with the episode this particular set of three cels comes from, it’s my favorite example from the show… 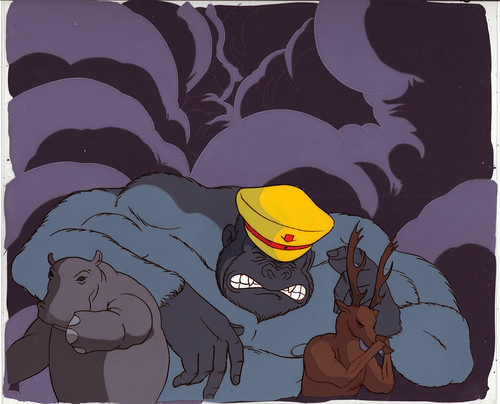 When I first started picking up animation cels my wife was a bit skeptical.  Even though she still adores cartoons in general, she wasn’t sold on the idea of animation cels as interesting or as a piece of art.  We came to the conclusion that she was really missing the overall appearance of the cartoon in that there were no backgrounds to go along with the still images I was showing her.  I guess character cels out of context just didn’t seem as much a part of the show, even though these are the exact cels that were filmed.  There’s just something to be said for the aesthetics of a complete image, even if it’s not exactly feasible to obtain painted cartoon backgrounds.  For one some backgrounds are very large paintings that encompassed entire environments and were "zoomed in on" or cropped as the 8"x10" or 11"x14" cel layers were placed on a section.  Others were used repeatedly in many episodes and are much rarer (especially in terms of being packaged up with the photographed cels and stored after a series was done.)

So when I happened upon the set pictured above, I knew my wife’s eyes would light up as it’s a much better example of a cartoon micro-second frozen in time.  Now technically this set doesn’t have a traditional background included.  The cloud of purple smoke rippling behind the three anthropomorphized animal creatures is also a single cel that included its own moving aspects.  It’s enough to fool the eye though and that’s all that matters (at least to my wife.) 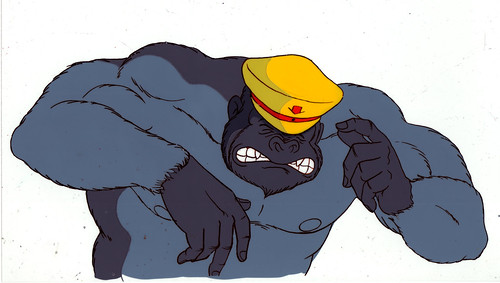 Besides the completeness which appeals to me, I also think it’s a perfect example of the great animation that existed on the show.  The rest of the cels I shared earlier in the week all seemed a bit rougher in terms of graceful line work, and since they were taken out of context of the scenes they were originally in you don’t get a feel for the over all compositions and color schemes from the cartoon, which I am still a big fan of.

These figures are alao a heck of a lot more dynamic in terms of shape and depth because there is a layer of shadow and highlights to the figures that I’m not finding in a lot of the other cels I’ve purchased.  This is an aspect of animation that really resonates with me, and it’s why I was so drawn to anime when I first discovered it in the early 90s.  When you compare a lot of traditionally animated fare from America (whether or not it was physically animated overseas) and most anime you’ll notice this is one of the big differences, the use of layers of shadows and color variation that really makes animation pop.  When I first started coloring my own art digitally, adding these additional layers was the "eureka" moment I needed to understand the process better (I wrote about this awhile back here.)  I wonder if this is a step that tends to get skipped because of the possible expense in terms of time and energy spent on an aspect that will most likely be ignored by the target audience? 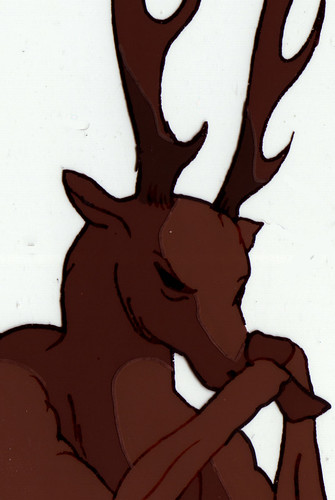 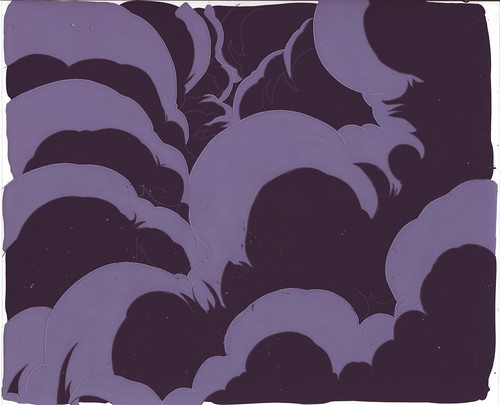 Also, I wanted to take a second to remind everyone that the complete Real Ghostbusters series is going to be available for purchase soon.  You can pre-order your set at the Time Life website (which is the only place outside of used copies that might end up on eBay) for $179.  Though I’m currently coveting the set, I don’t think it’s going to be one that I can work into my DVD budget at that price (an in the complete series format.)

So this closes the chapter on Halloween-y animation cels for this year’s countdown.  For the next couple weeks I’m going to keep the posts a little more random, though mostly 80s influenced.  Also, I might be back this weekend for some more movie commentary podcasting, but first I need to watch more flicks…

I’m having a nostalgic ReAction to these toys!

Easy Cheese Part Deux, I love the smell of cheese in the morning…

Peel Here #2: Lenticular Goodness that you can see from two angles!