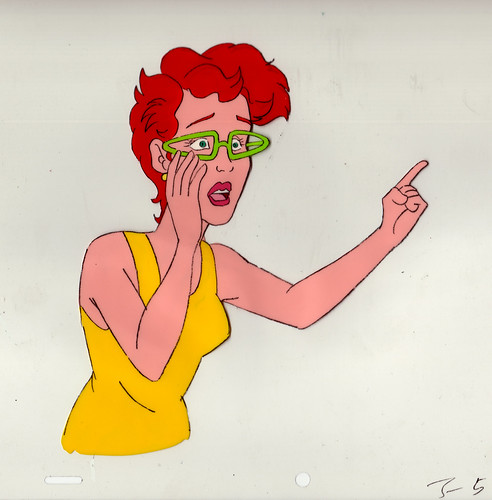 In film and in TV Janine Melnitz gets credit for being one of my first real crushes (in good company with Faye Grant from V, Mitzi Mozzarella from the Showbiz Pizza Rock-Afire Explosion Band, Jacqueline Bisset circa 1983 in the flick Class, and of course Adrienne Barbeau.)  One aspect of the character that I always found interesting was that she was pretty different style-wise in the cartoon than in the first movie, but by the time the second movie rolled around, the writers and designers (or at least Annie Potts) decided to co-opt the look from the cartoon.   I did think it was kind of a cop-out that she dropped her interest in Egon in the 2nd film for of all people Louis Tulley. 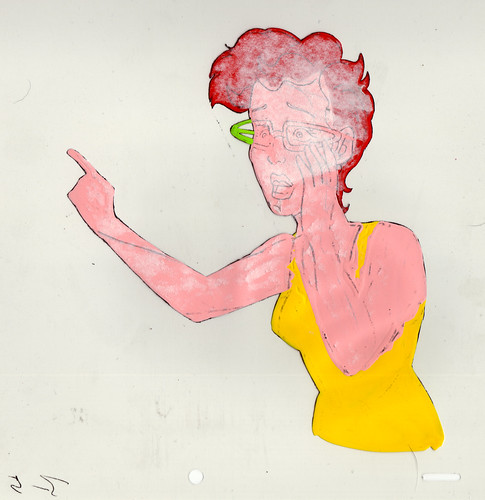 Anyway, back to the cel, as you can see above this cel is a prime example of the damage that can be done over time by storing them directly on top of the pencil under drawings.  The under drawing adhered to the paint and was destroyed, forever merged with the cel.  Granted, I don’t think studios ever thought of the post-photographed cels as any sort of asset and I’m sure stuff them into boxes and packed ’em in un-climate controlled storage facilities to gather dust until the day when some unsuspecting citizen bought them in a blind storage auction.  Being a huge fan of 80s cartoons, and considering these cels as pieces of art in and of themselves, I think it’s a downright shame that they’re mistreated and I’m sure a good portion of them are lost to time because they’ve either deteriorated or become one huge merged stack of cel, paint and paper.

Oh well, at least I’ve managed to find a few and give them a good home.  More or less rounding out the main cast of the Real Ghostbusters cartoon is one of my least favorite characters, Slimer, the ugly green spud himself. 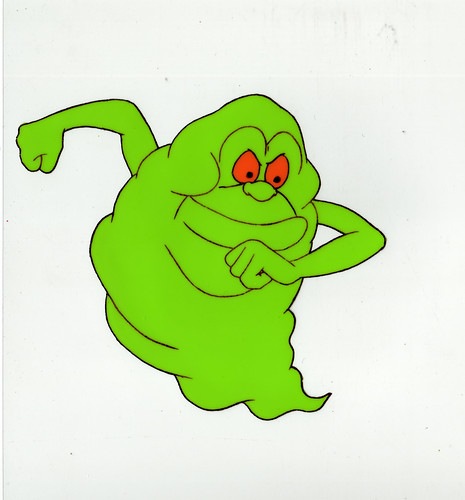 Though I didn’t mind him as a humorous villain in the live action flicks, his presence in the cartoon added an unwelcome air of Scooby Doo-ness.   Now don’t get me wrong, I love Scooby Doo, but I never thought the Ghostbusters needed a pet-like mascot, and besides the odd relationship between Lydia and Beetlejuice in the BJ cartoon, I wasn’t very find of twisting around the hero/villain roles for cartoon adaptations of movies.  It doesn’t help that as the series went on it morphed into an almost all-Slimer show which was nowhere near the quality of the proceeding seasons. 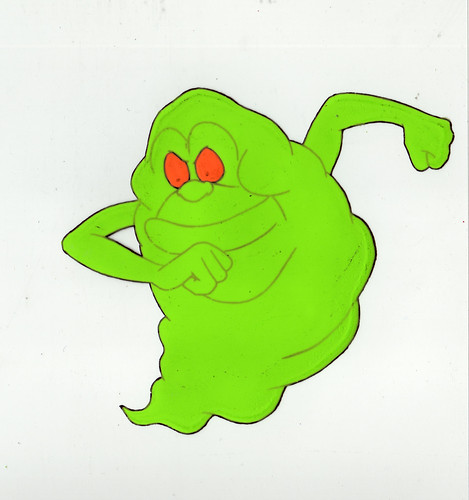 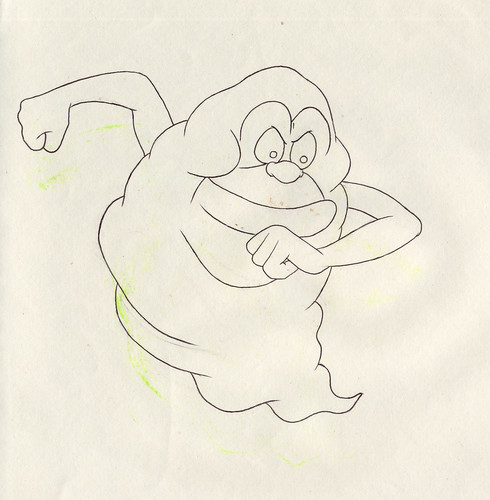 The vacation is almost over, but there’s still more Muppet Magazine!

…And the winner is…