Cartoon Commentary! Eyes of the Hawk, Ears of the Wolf, Strength of the Bear, Speed of the Puma!

What a week. I never realized just how insane an office move could be. Even though the physical aspect is over, the residual ripples are still keeping me swamped. I do have to say that the step up in quality in the new office is great. 20 inch flat screen monitors on adjustable arms, hidden PC towers under the desks, so much better than the ancient set up we had before. Now if I can just find the time to blog. BLARGH!

Anyway, the most exciting thing going on outside of crazy work moves is the coming Halloween season. I’m already seeing signs for the seasonal stores popping up, and Party City has already started rolling out its spread. I can’t wait to see what the Target displays look like this year, as well as beginning the hunt for interesting goodies. Can’t wait.

In the interim here’s the first of a handful of Bravestarr animation cels from around 1987. I figured I should begin with the show’s namesake, Marshall Bravestarr himself… 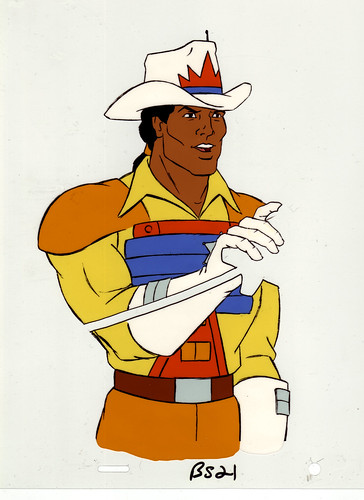 Bravestarr makes the end of the 80s cartoon era, at least in terms of shows that I remember fondly as a kid. For some reason it seemed like interesting shows dried up for a couple years as there didn’t seem to be that many shows that really entertained me. Of course this was also around the time that got into Metallica and started “acting more adult” as the ripe old age of 10. Anyway, Bravestarr also marks the end of an era for Filmation studios as it was their last big show before they closed their doors.

When I was hunting for cels I couldn’t find that many of Bravestarr that featured a nice shot of his face, or a full body shot. The above cel was about the best I could find. I wasn’t sure what he was holding in the scene, but I’ve since found the episode and realized that it was some sort of canister with a rope coming out of it. 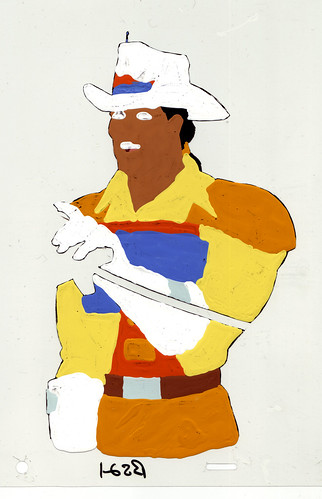 One of the complaints I’ve heard about the quality of the Bravestarr cartoon is actually one of the aspects that I love the most, the sketchiness of the black line work. The cartoon feels very rough around the edges this way but I think it adds both character and enhances the western feel of the show. 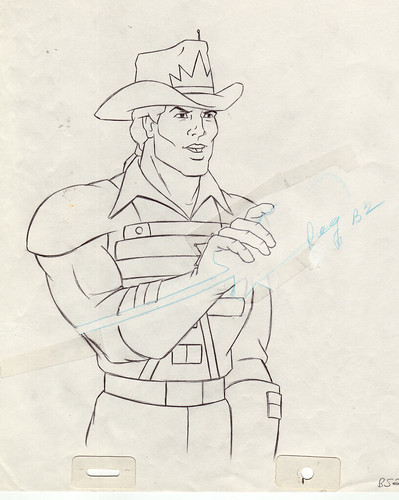 He came, he saw, he podcasted, He-Man.

Of motorcycles, helicopters, and heli-choppers…