It’s been forever and a day since I saw the movie that the stickers below are merchandised off of, so all I have to go on when it comes to Baby: Secret of the Lost Legend are some vague happy memories of watching the sort of realistic dinosaurs and only partially making the connection that they were being saved by non other than the greatest American hero himself, William Katt. 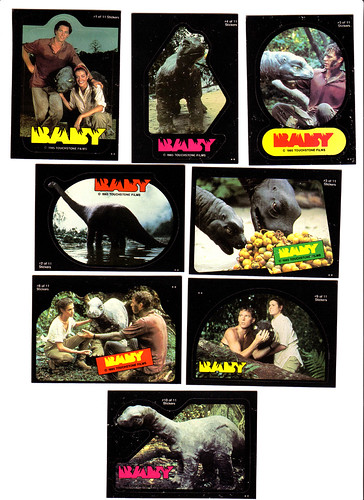 Though typically I’m a proponent of practical effect over CGI, I have to say that looking back at these Topps sticker cards from 1985 I think I would have a difficult time coming to the defense of the effects in the film.  The baby brontosaurus looks just side of papier-mâché or perhaps a piñata as far as quality goes and I’m sure it must have been difficult for Katt and Sean Young (who play’s Katt’s wife) to try and act alongside it.  When I look back on films that put actors in similar situations like E.T., Short Circuit, Gremlins, Spacecamp, and heck even Critters, I don’t see the same issues.  Maybe there needs to be a size limitation on the animatronic acting counterpart or something, I don’t know.  You can tell the production team had their hearts in the right place though and maybe just overreached their limitations a bit after the blockbuster success of flicks like Star Wars. 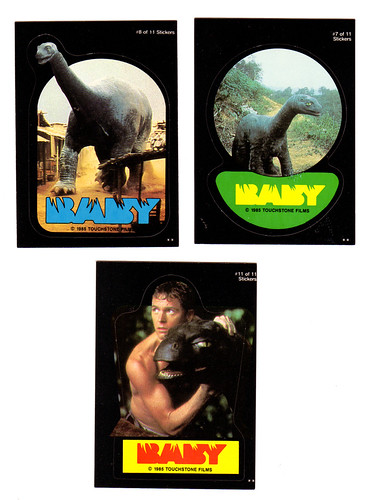 One thing I’m really not fond of is how the designers of the DVD packaging for this flick are trying to rip off Jurassic Park (as you can see here in the new logo.)  It’s like reverse timely vampiric marketing. 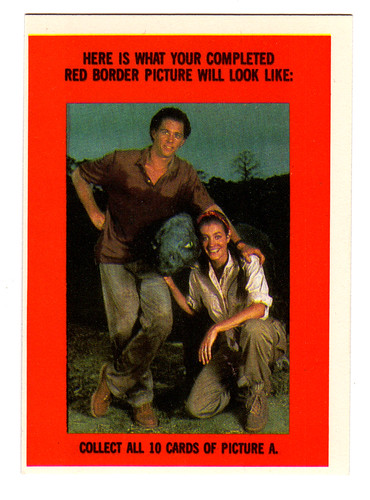 Looking back on it I’m not exactly surprised that this flick had an entire card and sticker set merchandised off of it, I’m actually surprised that there weren’t more products since typically toy lines and such are developed in advance so they can be ready in stores after a film’s release.  I guess either the producers weren’t sure about the marketing, or the various companies bidding for the property weren’t interested. 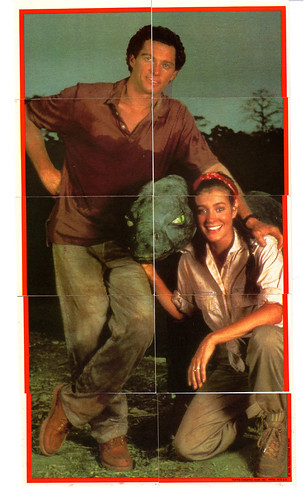 These sticker cards are pretty standard fare interms of Topps film merchandising output over the 80s.  11 stickers and one cardback puzzle.

The Lost Pieces of The Monster Squad

Cobra Commander’s Future is So Bright, He’s Wearing Shades Under His Faceplate!