I feel like I’m so behind in keeping a regular posting schedule around here.  My day job is sapping so much of my time lately, and yeah, blah, blah, blah I know no one wants to read about my day job woes.  Anyway, there is a bright light on the horizon though as things are starting to fit into place and are getting back to normal (which means a regular schedule and routine), so hopefully I’ll be back to normal soon.

In the mean time, here is another edition of Cartoon Commentary!, and yet another piece from my 80s animation cel collection.  This week I’m going to take another look at a cel from the Filmation He-Man and the Masters of the Universe cartoon, circa 1984-85.  This one features another one of my favorite characters, Battle Cat, the alter ego of Cringer and steed/side kick to the muscled man himself, He-Man. 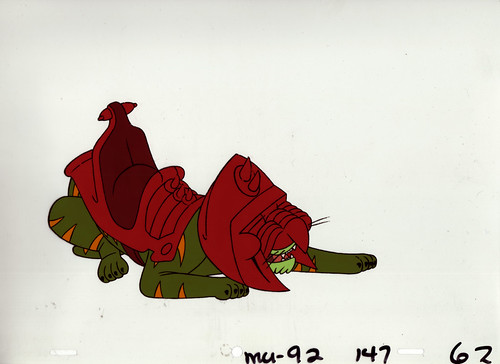 I think when it comes to Masters of the Universe I tend to fall in love with characters based on their design more than their personality per-se.  So as far as design goes, I really dig Battle Cat, in particular his gnarly helmet/mask, which highlights his almost serpentine yellow eyes.  I also love that the toy and cartoon designers managed to use the red and green color scheme without evoking even a lick of Christmas, which I have to say seems almost an impossible feat.  As far as personality goes, I like that they managed to turn give the Scooby Doo archetype a bit of a twist with his transformation from the meek fraidy cat Cringer into the bold and gruff Battle Cat.

Also, I managed to get a more overall scan of the cel this time so the production notes are included at the bottom (like I’ve mentioned, my scanner isn’t all that big.)  I haven’t managed to decode all of the notes yet, but I do know that the MU-92 refers to Masters of the Universe episode #92.  I’m not positive but I think that this cel is part of a sequence in which Battle Cat is about to leap up, and not the play bow that it appears to be.  Here’s a closer view of the cropped image… 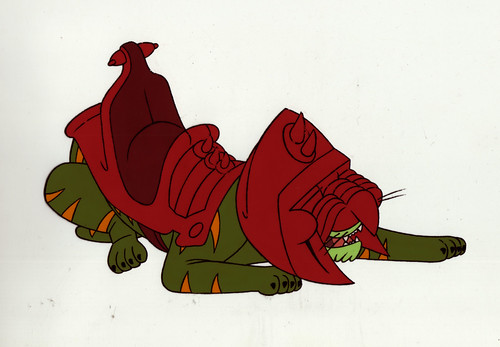 There isn’t a whole lot to learn from this cel and its pencil under drawing.  The one thing I did notice that is kind of interesting is in the pencil drawing.  The animator made sure to color in a couple areas in Battle Cat’s mouth, I’m assuming to show the final ink & paint artist where there would some color variation in that area.  You can see that whoever painted this cel could have misinterpreted the area to the right of Battle Cat’s teeth as another place to paint in a darker red as it appears to be colored in like the area to the left, but upon closer inspection this is just where some of the blue pencil lines came close together.  I can see where it would be easy to miss-color something in the painting process, and again where Filmation benefits from having it all done in house where the communication would be better. 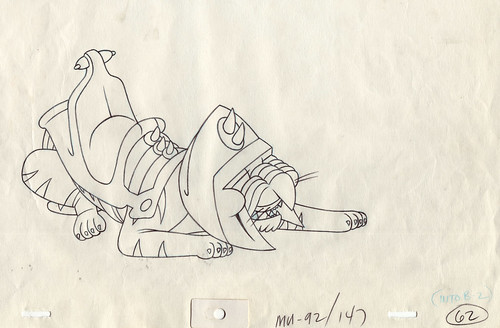 I have one more cel, from She-Ra, to share next week before I move on to another Filmation cartoon that I loved growing up, Bravestarr.

Branded in the 80s Microcast Episode 17, diverting the Scorpio comet your way…

Transformers Monopoly, or how I never want to type the word Monopoly ever again…