From time to time I get solicited for reviews by marketing firms representing companies with DVDs or CDs that they want to get the word out on.  Typically these are targeted pretty well, at least in terms of my interests and what not, so I accept and do my best to write and honest review of the product in question.  Lately though I’ve noticed an increasing trend where these companies want me to pimp products that either don’t hit on my interests all that well or they want me to blindly "review" a product or service, which basically means that I don’t get a chance to really play with the item in question (they either don’t supply a review copy or it’s a truncated version.

Recently I accepted a solicitation to review some CDs that came out this past year, the deluxe collector’s edition of Blondie’s Parallel Lines and the 2-Disc Pat Benatar Ultimate Collection.  On the one hand I was kind of dreading the idea of writing reviews for albums that have either been available for 30 odd years (Blondie), or are career retrospectives of an artist that I’m not all that familiar with (Benatar.)  Not to mention the fact that I’m far from a music aficionado and don’t really know how to do a good review beyond gushing about what I like to listen to, etc.  On the other I felt confident that I’d be able to come up with something based on the format with which these albums are being released (the packaging and extras), I mean that’s really what the company (in this case EMI) is selling right?

Well, here’s where the above mini rant comes in.  Because companies are becoming stingier and stinger as far as providing review copies, it makes the job of pimping their product very difficult.  Basically EMI sent me the barest of bones versions of both albums, which are for all intents and purposes burned copies of the music on CD with almost plain white packaging (they had small photocopied versions of the album covers, but that’s about it.)  None of the actual packaging is included, so I’m left with only the music (and a bonus DVD that came with the Blondie album), which affirms my fear that I have to find something original to say about these albums. 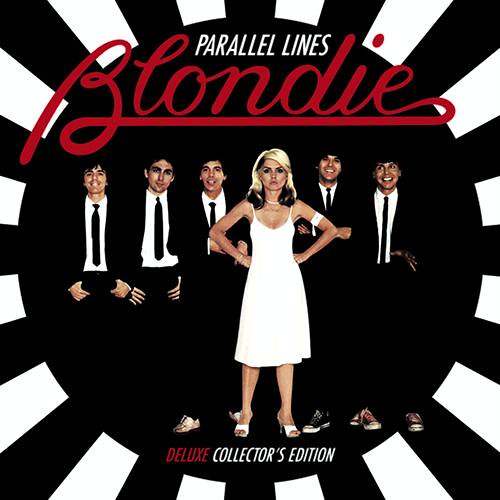 Call ’em new wave, punk, post punk, pop or just plain rock, Blondie is certainly one of the most recognized bands to come out of the 70s New York Punk movement, and this success can surely be attributed to their breakout album Parallel Lines (well breakout in America that is.)  This is also the album that solidified the classic Blondie sextet of Debbie Harry on vocals, Chris Stein on guitar, Frank Infante also on guitar, Jimmy Destri on keyboards, Nigel Harrison on bass (taking over from Infante who had then recently moved to guitar), and Clem Burke on drums.

Parallel Lines is probably the tightest of Blondie’s oeuvre, with a mess of hits (both in the U.S. and the U.K.), but everything on the album feels pretty solid which seems pretty rare in the post Beatles/Beach Boys pop scene where many albums seemed to have two singles and a ton of filler.  It’s also the album where the group really begins stretching themselves in terms of style and genre, floating in and out of pop rock, punk, new wave, a touch of reggae and even a smattering of disco (say it ain’t so!)  The album practically explodes with ‘Hanging on the Telephone’ (written by Jack Lee), which features Harry jumping out almost a full second in front of the drums and then the rest of the band.  ‘Telephone’ is pretty much the blueprint for the perfect two and a half minute pop punk song that just keeps pushing and doesn’t let up until the last guitar strum fades out.  The album keeps this pace with the second track, the debut of Harry and Harrison’s writing collaboration, ‘One Way or Another’, which opens with a great crisp guitar lick that leads into a very upbeat head bopping rhythm which completely goes against the disturbing stalkerish lyrics.  Harry’s cat growl is dripping with feminine machismo, particularly when her voice cracks and you can hear her words practically ripping out of her throat.  OWOA is surely the late 70s reinvention of Nancy Sinatra and Lee Hazlewood’s ‘These Boots are Made for Walkin’, if not in lyrical content, then in tone and the gusto singing of an empowered woman. 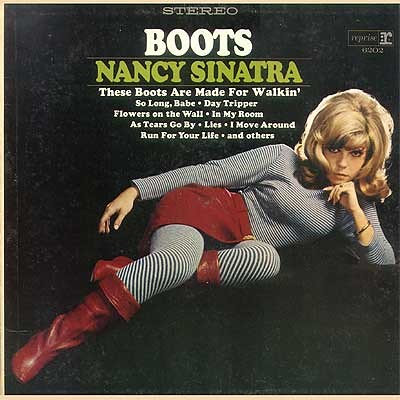 Part of what I love about Blondie is encapsulated in the third track, ‘Picture This’ (Harry, Stein, & Destri), particularly Debbie Harry’s juxtaposition of her deadpan and almost talky singing (not to mention her patented voice crackling) over the perfect pop rhythm of the music.  To me this is the punk creeping out and marring what could otherwise be the perfect pop band, but helping at the same time to keep some of the edge of bands roots and not letting it ever sound too manufactured.  Of course, that doesn’t keep her from showing off her vocal range as her lyrics trail off into sustained soaring notes during the short breaks between verses.  Of course another aspect that I dig about the band is expressed in the fourth track ‘Fade Away and Radiate’ (Stein), which is as much New Wave (with it’s moody keyboards and modern dystopian lyrics) as it is Prog Rock (with it’s slow plodding beat sweeping toward sonic crescendos; the song reminds me of some of Pink Floyd’s Dark side of the Moon), yet also containing a dash of Reggae at the end to close the song out.  It’s this variation and experimentation that keeps the band interesting to me.

I can probably go on talking about every song on the album like this, from the fun Talking Heads-esque harmonizing, duets, and the Kraftwerk-ian background electronica of ‘I Know But I don’t Know’, the exquisitely simple beat and church organ keyboard riffs of ’11:59′, the tug of rope between Harry’s talky and sing songy delivery of the lyrics and the start and stop verses on ‘Will Anything Happen’, the almost sickeningly (but never over the top) sweet early Beatles pop of ‘Sunday Girl’, the childlike giddiness of ‘I’m Gonna Love You Too’, which almost sounds like it’s riffing off of the Eep Oop Ork Ah-Ah (Means I Love You) song from the Jetsons, or the all-for-one crowd chanting and smarmy backing vocals that punch up ‘Just Go Away’.  The biggest surprise for me on the album though is the staying power of the most popular hit on the album, the disco revamping of ‘Heart of Glass’ a live rock mainstay for the band up until Parallel Lines was recorded.  Not only is it the album’s biggest hit, it’s also the song that more or less defines the band in the public consciousness popping up on a million pop compilations and band best-of collections.  Growing up surrounded by all of the very plastic and heavily manipulated pop of the 80s, not to mention the glut of sort-of bands that neither wrote nor really preformed their music, you’d think I’d love Heart of Glass outright.  Hell I’m particularly vocal about my love of the Monkees for crying out loud.  But at some point in my upbringing I latched onto the idea of creator written and preformed music equated quality, and I was right there pumping my fist in the air when I saw footage of Tom Petty smashing drum machines and decrying the disco era of pop music.  So when I first heard Heart of Glass as a kid I reacted as if someone threw a wet towel from the garbage in my face.  Years later though, I can’t help but appreciate that Blondie was stripping away all the untalented posturing of disco performers and taking the undeniable pop bliss of the sound and melding it with their own, and makes for a perfect dance hit that you can feel proud about liking.

All in all, I completely adore the album, and as I said in the beginning of this rambling love letter of a review, I don’t really know what I can add to the 30 years of commentary on Parallel Lines.  I’ve read that the album’s title reflects the never connecting bodies in motion in many of the songs, which I think makes perfect sense.  Unfortunately I fear there really is no original thing I can say about this classic record as a whole.  So again I find myself left with the truncated burned-copy version of the re-release and what sets it apart from the various times this album has been released on CD in the last 20 odd years.  It’s called the Deluxe Collectors Edition, but what exactly does that mean?

Well, from reading reviews on Amazon, and thanks to the handy synopsis on the back of my crappy copy I see that the set comes with a booklet featuring the entire original album cover photo session (obviously not included, so I can only hazard a guess that it might be fun.)  The set also contains two discs (and I was lucky enough to get both); Disc one includes 4 bonus audio tracks which consist of alternate versions of ‘Heart of Glass’ (the 7" version without the little disco opening bit) and ‘Sunday Girl’ (the French language version that I actually sort of prefer to the original), and two of the most annoying and pointless remixes of ‘Hanging on the Telephone’ (which is just an evil massacring of the original with a pointless two minute high speed tub thumping intro that I can barely get through) and ‘Fade Away and Radiate’ (which is almost unrecognizable.)  Disc two contains 4 video shorts, three of which are precursors to what would eventually inundate the teen pop culture on MTV, and the fourth which is a segment from Blondie’s appearance on the BBC’s Top of the Pops (where they ‘preformed’ ‘Sunday girl’; and yes the quotes around preformed are intentional.)  The first three music videos (which are for ‘Heart of Glass’, ‘Hanging on the Telephone’, and ‘Picture This’) are interesting, but not ground breaking (they’ve been available in other formats before), not to mention kind of difficult to watch as all of them have the music overdubbed and it’s plain to see that the band isn’t even trying to go through the motions of faking it.  Heck, during the video for ‘Hanging on the Telephone’ Jimmy Destri spends most of the running time pretending to hang himself with a phone cord which though fitting for the song, seems instead to speak of his boredom with the at-the-time-pointless video shoot.  The creative impact of music videos just hadn’t been explored yet and to me it feels like the band is going along with them in a completely obligatory fashion.  The worst offender of the overdubbing is the Top of the Pops segment though as the band is obviously faking it in front of a live audience.

So in the end, is this version deluxe?  Not really, not when all of the bonus content (except the French version of ‘Sunday Girl’) detracts from the natural brilliance of the record.  Is it worthy of collectors?  No and, uh, no.  Is it an edition that I would recommend running out to purchase?  Not if you already own it, and honestly, not if you have a choice to get the remastered re-issue from 2001 which is cheaper.  If you can find it cheap it might be worth having nice versions of the promo music videos, but they’re hardly worth seeking out the album.

Next week I think I’ll sit down and try and get under the hood of the Ultimate Pat Benetar.