I figured since I started sharing my animation cel collection last week with an Orko Cel from He-Man and the Masters of the Universe (the 1st cel I broke down and purchased for the collection), I thought I’d stick with posting Filmation cels for a bit.  Also, I wanted to mention again that because my scanner is relatively small (8"x12") I can’t get a good scan of the entire cel and have decided instead of crop the image so that only the painted image is in frame.  I’m trying to include the production notes at the bottom of the cel when I can, but it doesn’t always work out.  What I need to do is also include a photo of the full cel, which I’m working on (my camera is on the fritz at the moment), but it might take a bit.

Anyway, this week I thought I’d share a cel from the sister show/spin-off of He-Man, She-Ra Princess of Power.  Though I never really watched it when it originally ran I’ve become a pretty big fan of the show in recent years as there are some interesting plot change-ups when compared to He-Man, a cartoon that I loved growing up.  I always figured that She-Ra was just a version of He-Man for girls, and though to an extent it’s exactly that, the premise isn’t quite the same.  The most marked difference is in the power struggle between She-Ra and her arch nemesis Hordak, and the fact that Hordak is in control of the fantastical land of Etheria with She-Ra leading a band of freedom fighters to try and liberate the populace.  Whereas on MOTU where King Randor was in control of Eternia and Skeletor was always attempting to usurp that power, constantly being derailed by He-Man and his friends.  The She-Ra cartoon comes off a lot darker and seems as if it takes more cues from the original Star Wars trilogy than any of the barbarian/sword & sorcery epics that informed He-Man.

Again, since I shared a cel featuring Orko last week I thought I’d share a character from the She-Ra cartoon that is sort of his counterpart, Loo-Kee, circa 1985.  Well, actually, the She-Ra ‘Orko’ would actually be Madame Razz, a bumbling witch who knows She-Ra/Adora’s secret much in the same way that Orko knows Prince Adam is really He-Man, but Loo-Kee also shares some similar characteristics to Orko… 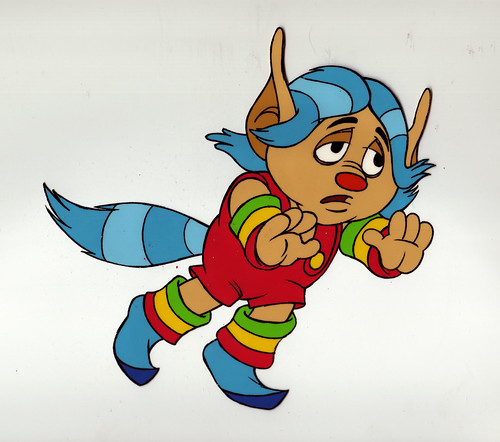 Basically Loo-Kee was a character that was hidden in the background of each episode.  He’d appear before the end credits and ask the viewers if they managed to find him (in a very Where’s Waldo sort of way), and then he’d proceed to give the moral of the episode. I think this is sort of an interesting way to change up the moral-giving aspect of 80s cartoons as it’s now coming from an outside source and can be taken a little bit more as commentary instead of a direct lesson from one of the main characters.  I do believe he ends up mixing with the main cast in a couple of episodes, but for the most part he’s sort of outside the plot and it more of a figure head for the show, much like how Orko seems to figure in as a representative icon for the MOTU cartoon.  He’s also a smaller, almost comic relief type of character, again much like Orko, so I kind of consider him a partial counterpart.

Anyway, as far as the cel itself goes, I was really happy with this one. The painting is on the large size, taking up a good portion of the cell (about 6.5" square) and it’s really colorful.  See color is another draw, at least for me, with animation cels.  Since the cels tend to only have one character or item on them, and since they are typically mostly clear negative space for other cels to lay on top or show through, I find it really cool when the image is striking or vivid.  Loo-Kee was made to be just this as his desing works in practically ever color in the rainbow (except orange and purple, though orange is sort of implied in his skin tone.)  So having the image on the large side and colorful really makes this cel pop.

I even like the depressed, sort of scared expression on the character’s face as it’s an emotion you don’t typically get from him, sort of like an enraged He-Man cel would be.  There’s also very little paint damage, just a few specks of missing paint on his coveralls here and there.  The black linework can out mostly crisp as well in this cel, so it doesn’t end up looking too sketchy or like a bad photocopy. 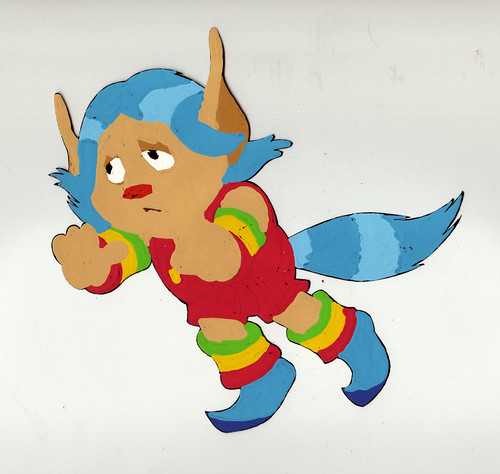 Something I meant to point out in the last CC! is the quality of work Filmation did with it’s cartoons.  Now I’m pretty much talking out of my ass here as I really don’t know all the ins and outs of the animation process, but from what I can gather just by examining the cels in my collection, the Filmation cels all seem have a little bit more going on in the quality department.  For instance, when looking at the back of the cels where the paint was actually applied, you can see that almost none of the black line work shows through the paint.  Typically I wouldn’t claim a paint’s opaqueness as a mark of quality, but when I was thinking about some of the other cels I have and how you can very clearly see the line work through the paint on the back it occurred to me that you might have areas when paint overlaps that might be discolored because the last color applied might filter through the other layers of paint.  This certainly seems like a quality issue to me.  Also, all of the Filmation cels that I own are larger (11"x14") than most of the other cartoons I’ve seen so far (which range from 8.5"x11" to 9"x12".)  Again, not that size equals quality, but it does free up the artists to work in a little more detail or play around with layout a bit more.

I have to assume this is because Filmation was almost entirely animated in-house as opposed to outsourcing the cel production work.  From all of the special features I’ve watched included in the sets released by BCI: Ink & Paint, Filmation really does come off as a studio that cared a great deal about quality.  It"s funny, people tend to point fingers at Filmation for re-using animation sequences, but by doing so they could afford to keep the whole production together which meant that coordination and communication between departments putting a show together were always the best they could possibly be.  Not that this is something visible from the cel above, but you could also see this in the various series they worked on as there really weren’t that many obvious animation errors like miss-colored characters or unevenly photographed cels, again because of the fact that it was all done in-house. 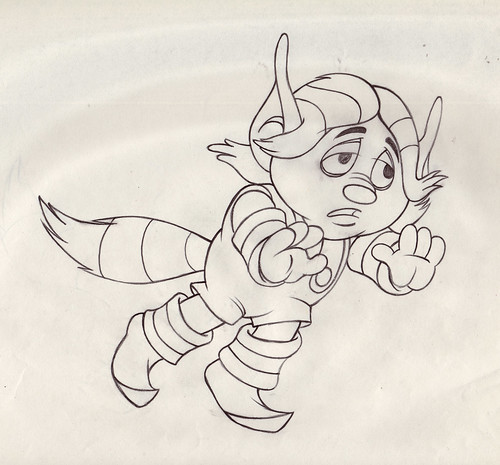 As far as the pencil under drawing for this Loo-Kee cel goes, there isn’t all that much to comment on.  I thought it was interesting that the animator took the extra couple of seconds to fill in his eyebrows and pupils as it seems like an extra step that’s not needed considering the final cel will have to have these areas filling in or touched up in black paint.  Granted it’s not a large area of black fill in the pencils, but when you compare it to the Orko pencil drawing I shared last week, you can see that they didn’t bother to color in either the ‘O’ on his cloak or the shadow under his hat where his eyes peek out.

Next week I’ll have another CC! featuring yet another animation cel from Filmation…

Forget Thanksgiving, Come Visit Me at the Up Fair in November!