Though Warner Brothers announced this a couple months ago, I thought I’d go ahead and post the news about the impending release of the Silverhawks cartoon on DVD, October 14th later this year… 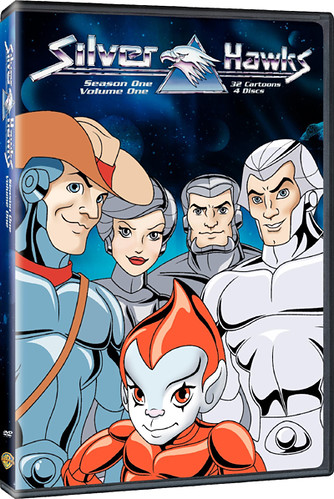 Like every other cartoon I loved as a kid it’s been forever and a day since I’ve seen the show and from what I’ve been hearing it might not hold up all that well.  Personally I’m not worried about it holding up.  When I was a kid this is one of the shows that I was so pumped to watch in syndication after school that I memorized the theme song and would sing along at the top of my lungs when it came on.  Silverhawks was the Rankin/Bass follow up to Thundercats, and though I don’t remember exact plots I do remember how much I loved the fact that nothing was off the table in terms of content.  Mark Rudolph describes this factor best in the Art & Story podcast, but the show was very Jack Kirby in this manner featuring villains and heroes that used space-aged guitars as weapons (Melodia and Bluegrass respectively), a villain with a giant tuning fork as a weather controlling weapon, and Poker-Face who has slot machines for eyes.

I always used to love it when the team of heroes would "get into battle mode" by wiping their hands in front of their face which would bring down a pretty cool looking mask.  It was a feature that was dearly missing from the action figures (though most of the Silverhawks had a function where you could squeeze their legs together or something to extend their arms out and unsheathe their wings.)  Anyway, coming from Warner Brothers the set is a little pricey ($49.99 suggested retail), but you can pre-order it from Amazon for only $29.99 right now.  The set is going to feature 32 episodes over 4 discs and should be volume one of a two volume series (as there were only 65 episodes produced.)

Also announced by Warner Brothers is the release of the second volume of the Smurfs DVDs.  They haven’t set a release date yet, but here is the packing art (swiped from TV Shows on DVD.com.) 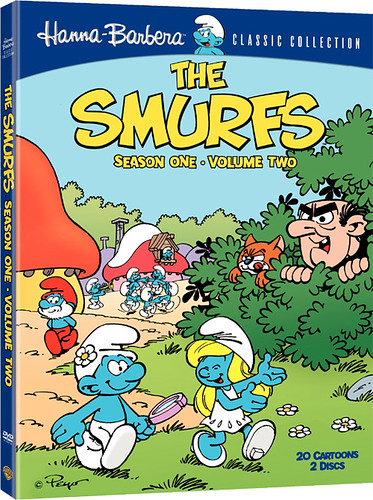 The set should contain 20 more episodes from the series, most likely broken up into shorts to remove the repeated shorts from the previous set.

Peel Here #23, I told you there was an octopus in that one scene!

Before the Garbage Pail Kids we had the Crabbage Patch Teenagers!