Announcing Branded in the 80s, THE MAGAZINE! 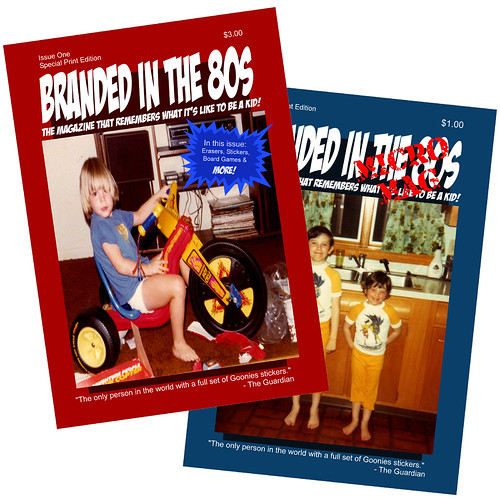 Well, I’ve been mentioning it a bit here and there for going on a month, but I feel a little more comfortable making a more official announcement now.  One of the reasons I’ve been sort of sparse on posts and column updates recently is that I’ve been working feverishly on expanding Branded in the 80s a bit with a print component.  Basically I’m trying to put together a small (literally) magazine that’s pretty much in the same vein as the site.  I have no idea what kind of publishing schedule I’m going to try and keep (quarterly sounds about right though we shall see), but the 1st issue is in the can and back from the printers.  I’m going to test the waters by taking Branded on the road for the shortest release tour in history, making only one stop this year at Wizard World Chicago.

Ever since high school I’ve been itching to work on some sort of project that would end with a print component, and I’m finally getting off my butt to do it.  This first issue of Branded in the 80s magazine is a bit small both in page count (clocking in at around 20 pages) and stature (it’s about 5.5" x 7", manga sized), but considering I only gave myself 2 weeks to work on it I’m actually a little surprised it got done at all.  The issue contains four articles, most of which are culled from material on the site (I haven’t figured out whether or not I’m going to pursue the webcomics or an exclusive content model yet), though I’ve expanded on all of them to try and give them more of a ‘magazine article’ feel.  The tone of this first magazine is more or less an introduction to Branded in the 80s and is mostly intended for sale at the convention (it’ll also include a CD insert of a handful of the Branded podcasts I did way back when.)  I’m also taking a second micro-magazine to Wizard World, an eight-page issue that’ll hopefully act as a stepping stone to the longer magazine and has an exclusive article (wow that sounds pretentious) on Choose Your Own Adventure style books.

I’ll be honest, I have no idea if this is a crazy idea or not, but I’m excited about it and it’s been a huge challenge creatively, and I’ve really dug taking a crash course in layout & design.  I think the first issue could be much better, but hopefully that’ll be something I can work on in the future if I decide to put together some more issues.

I’ve done my best these past two months getting a bunch of stuff ready for the table at the con, and in addition to the two magazines, I’ll also have Branded in the 80s buttons… 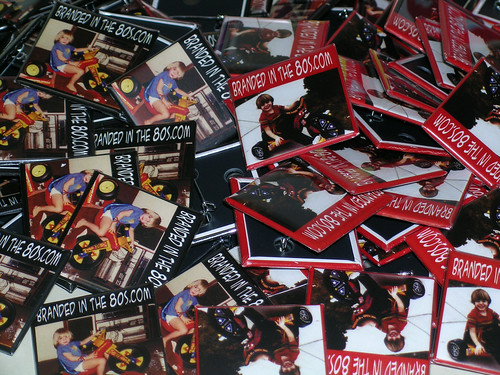 If you can’t make it to WW:Chicago, but would like to help support the Branded in the 80s project, you can order a print copy from the Indy Planet store by clicking on the cover below.  The book is $3, and all orders from the store will not include the CD insert (which shouldn’t be a big deal as the podcasts are all free and available for download here, click the banner in the right hand sidebar.)  We’ll see how the sales at the con go, but I’m assuming that I’ll also have copies of the micro-magazine left, as well as buttons.  If I do, I’ll update after the con, and if anyone wants to get one of either you can drop me an e-mail (at the link to the left.) 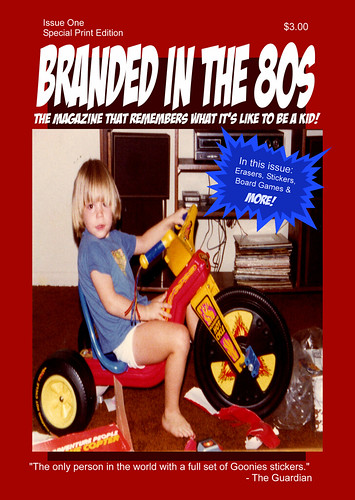 I’ll be going on vacation before the con, so this will probably be the last update until after the show.

P.S. the quote at the bottom of the cover is real, but also sort of an absurdest joke on my part.  I thought it would be fun to use a pull quote for the book, but unfortunately the only legitimate quote for Branded was a very silly bit from the Guardian (U.K. paper) which overestimated the rarity of my sticker collection.  I don’t know, I think it’s funny.  See you all after Wizard World…

The All New Branded in the 80s Podcast, Episode 4!