I’ve got something a little special for this week’s Peel Here, scans of a vintage sticker collection from 1985.  Why’s this special you ask?  Well, these images were supplied by Shana Bilbrey, and are of her personal collection, so it’s another rare occasion when I can take a look at some stickers from the 80s that I haven’t been compiling and starring at for year before I get a chance to post them.  It’s kind of nice to get a chance to see something new like this every once in awhile.  So anyway, thanks Shana for supplying some really nice scans of your collection. 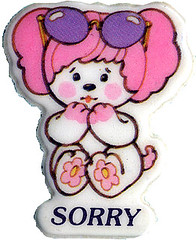 **Update** As was pointed out in the comments and a few e-mails, the too-cute-for-words pink and white puppy that appears a in couple of the puffy stickers in the pages below is named Poochie, not Pookie. Always learing something.  Thank the gods that the kismet/karma worked in my favor and the sticker actually apologized for me…

The first thing I noticed was that these stickers are housed on an actual sticker collecting book instead of the converted photo albums that I tend to see (and had myself growing up.)  Each page, including the cover, has a television screen theme going on which is fun.  I didn’t have a ton of stickers growing up (my collection was mostly Garbage Pail Kid-centric), so I was surprised by the letter themed stickers on the cover below (the ones with the animals) because I had a few stickers from this series, namely the S, H, A, and N depicted (as well as a W sticker.)  I remember the snake coiled around the S in particular as I had a little bit of a snake fetish growing up in Florida.  My mom is terrified of them and she was constantly warning me about the pond behind our house in Tampa.  Anyway, I think it’s one heck of a bit of luck that Shana and I share the same letters in our first names because now I can revisit these stickers.  I’m not sure of the company that produced them, but I remember getting mine off of a huge spinner rack filled with rolls of stickers that you’d tear off and purchase individually (which is in the Lisa Frank/Mrs. Grossman/Sandylion sort of territory.) 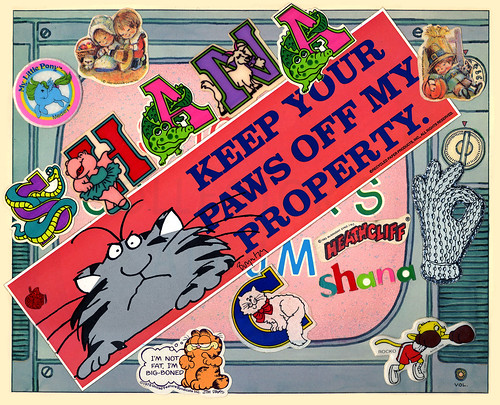 Anyway, there’s a really nice mixture of styles, brands and properties in this collection, which you can already see on the cover (Hallmark Thanksgiving, Garfield, Heathcliff, My Little Pony puffy stickers, as well as what I believe is a puffy sticker from one of the Pink Panther shows, as well as the large bumper sticker with a cartoon cat that I recognize but can’t name for the life of me.)  Heck, there’s even a knock-off Michael Jackson sequined glove prism sticker.

On the back cover we can see that this sticker book was produced by Hallmark, and there’s even more brands and styles including a puffy googlie eyed mouse, some Garfield scratch-n-sniffs, some Smurfs stickers as well as what looks like a Hallmark "Create You Own" style sticker featuring a cartoon dog.  It reminds me of a similar set of stickers I shared last Halloween. 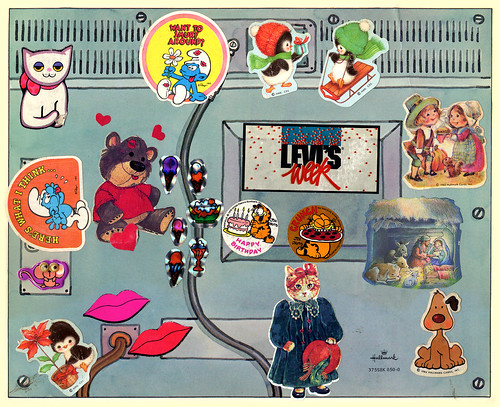 You know, if there’s one aspect of pop culture that I wasn’t really hip to during the 80s it was probably music.  As a young kid I only had ears for Michael Jackson, the Monkees, the Beach Boys, and Weird Al, and then later on it was pretty much only Metallica, Megadeth, and weirdly enough Poison and Motley Crue (as a 10 year-old.)  As far as the whole pop and new wave deal, I totally missed out.  I remember getting into viscious arguments with my best friend’s older sister about the validity of bands like Duran Duran and U2 (which led to the awkward shouting match, Me: "Well, U2 sucks!", Her: "U2!")  I remember trying to follow the stuff my sister was into, Christopher Cross, Prince, Cheap Trick, Madonna, and Rick Springfield, but it was all too much for my addled little brain.  So it’s pretty interesting, at least to me, to see stickers for groups like Huey Lewis and the News, the Thompson Twins, and Wham in Shana’s sticker book right along side her Mrs. Pac-Man, root beer scented teddy bears, and Care Bear stickers.

Again, thinking about the whole sticker-collecting boom in the 80s, this is the sort of thing that I find so fascinating.  Stickers are the perfect bits of advertising (portable and fun), and as far as inadvertently chronicling a period in pop culture history a sticker book is just an amazing and potentially comprehensive look into the past. 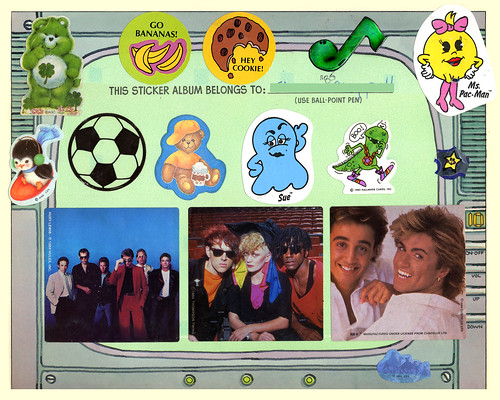 If there’s one constant in Shana’s book, it’s certainly cat stickers.  The ones on the bottom of the page below I would have to assume are Lisa Frank (at least they have that airbrushed multi-colored, yet heavy on the purple and pink look of LF products.)  Shana also had some very diverse tastes in terms of sticker styles, with plenty of puffy, fun die-cut shaped, glitter, scratch and sniff, prism, foil, and hologram stickers. 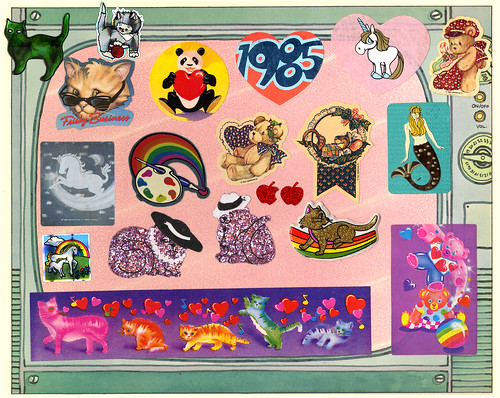 As a another great sign of the style of the 80s, are the City Cats stickers on the below page (including odd geometric shapes, loud colors, and plenty of music references.)  I also dig the lone electrified cat sticker (Halloween perhaps?) 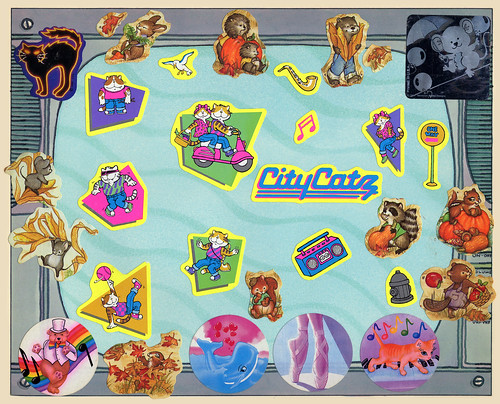 This next page has a nice gamut of holidays represented, from Easter, and Christmas to Valentine’s day (not to mention two huge properties Peanuts and Heathcliff.) 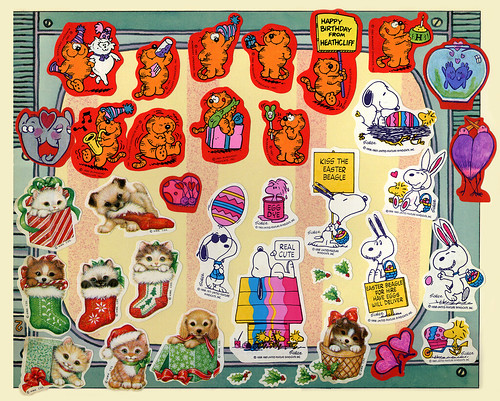 The first thing that jumped out at me on this next page was the one lone Christmas present tag sticker which just reinforces my opinion that anything, no matter what it looked like or was for functionally, was fair game as long as it was a sticker (like my meager collection of produce stickers that I had growing up.)  There’s also some nifty Marilynn Monroe stickers here, as well as some fun international cat stickers (the geisha being my favorite.) 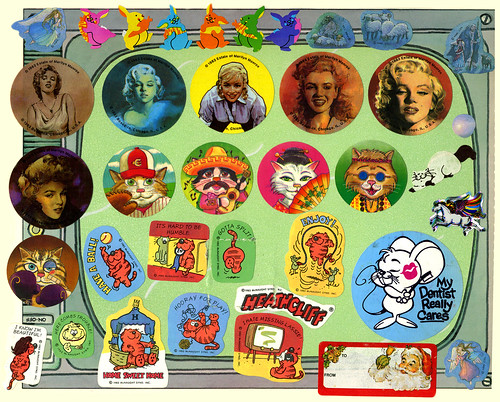 On the page below there is a pretty cool glow in the dark Snorks sticker. I’ve managed to find a couple of Snorks prism stickers, but have yet to see any glowing ones.  That’s a nice glittery Smurfette too. 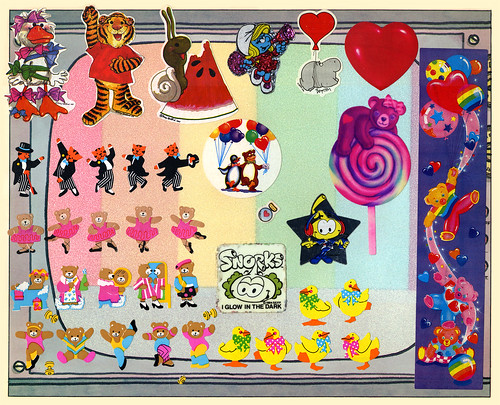 Here’s a nice page of varied puffy stickers.  I really dig the Kool-Aid stickers.  I was never allowed to drink it as a kid and thus developed a need to have it whenever I was at friend’s houses, and since have always been a fan of the product.  I believe that cute cartoon dog was called Pookie, but I’m not positive.  There’s also the rest of the stickers from the Pink Panther set. 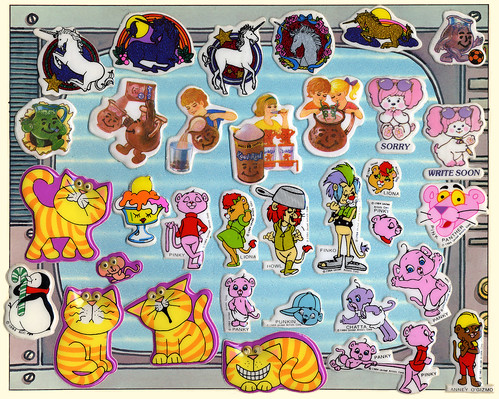 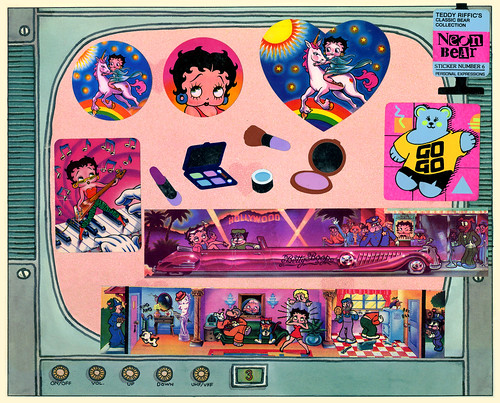 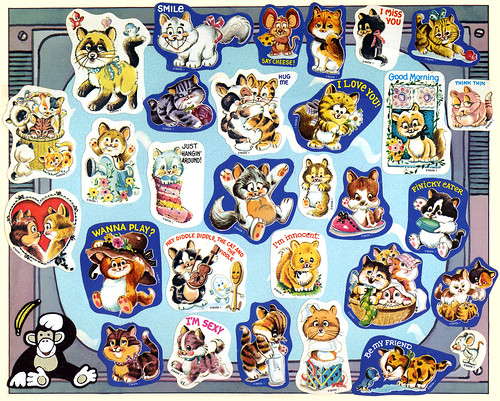 Yup, Shana definitely likes her cats (only joshing with ya Shana, it’s cool to see your childhood interest reflected in the collection as it makes it very personal.) 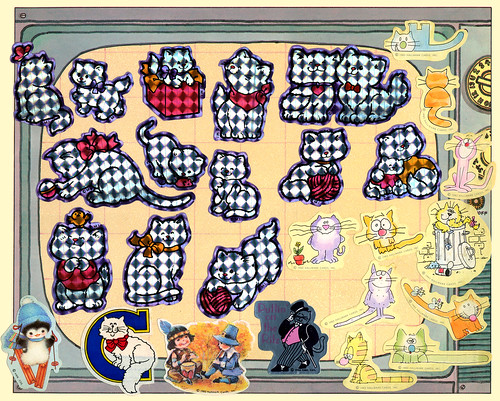 Take a gander at that awesome banana scratch and sniff sticker on the middle right.  I believe Shana said this was her favorite sticker, and I have to admit, it’s pretty darn awesome, if not a little bit disturbing.  A sexy banana doing a nutritious strip tease is enough to stop me dead in my tracks I’ll tell you what… 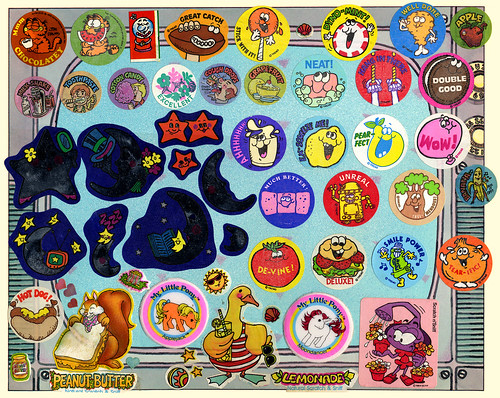 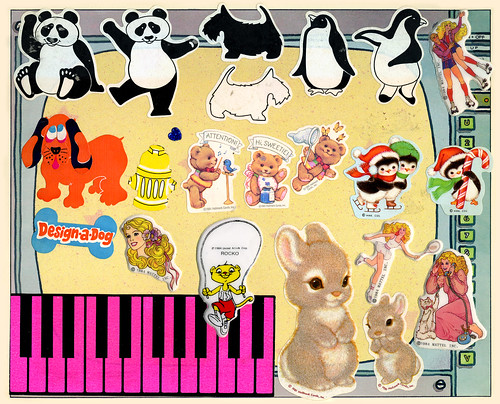 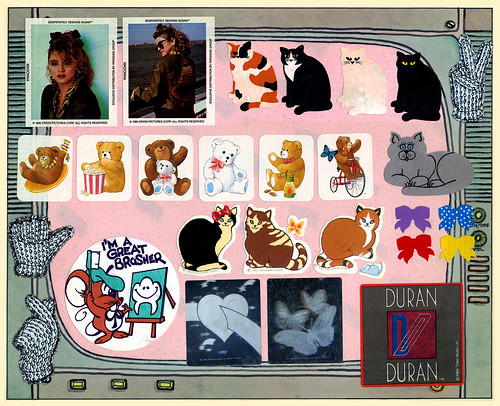 I of course love the inclusion of the Halloween stickers at the end here. I’m really digging the artwork on the Devil and that wolfman. 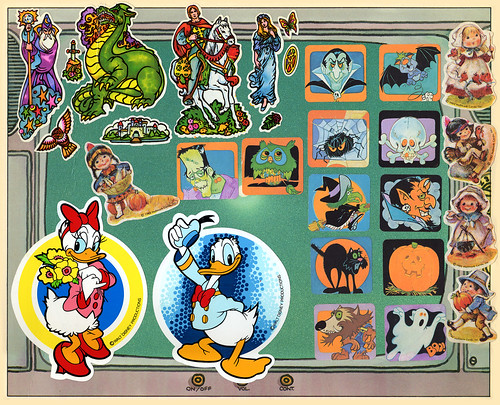 Well this is it for this sticker book.  There is one more in this series though, which I’ll hopefully convince Shana to share soon.

Work has been really kicking my butt lately so I won’t be able to get to the next TV Guide installment just yet, but hopefully I’ll be able to start working on it this weekend.  I also wanted to throw out a reminder that I’ll be attending the Wizard World Chicago Con at the end of this month (June 26-29th.)  I’ll be located in the Artist Alley (where ever that will be), so if you’re in the Chicago area, come by and chat a little.  I’ll also have copies of my mini magazine available for purchase soon on the site, details to follow…

Breaking into The Impossible Fortress