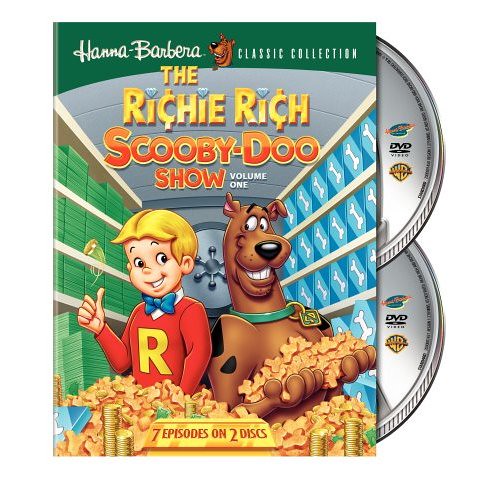 I can’t believe that I completely forgot about the upcoming DVD release of the Richie Rich/Scooby Doo Hour coming out on May 20th.  Of all the cartoons I watched as a kid, Richie Rich is one of the shows that I really associate with Saturday Mornings because I don’t remember ever seeing it in syndication later on during the weekdays or on cable.  Though it’s been forever and a day since I’ve had the opportunity to sit down and watch any episodes I can still vividly hear all the characters in my head as well as picture my favorite character, Irona the robot maid.  The show featured the voice talents of Frank Welker, Nancy Cartwright, and Joan Gerber (Mrs. Beakley on DuckTales), as well as Mark Evanier as one of the story editors.

It was paired up with probably the most unpopular version of the Scooby Doo cartoon (which was sans Fred, Velma, and Daphnie, and featured a whole bunch of Scrappy Doo) when it initially ran from 1980-1981, and then it joined the Pac-Man and the Little Rascals cartoons from ’82-’84.  Unfortunately the set coming out is only listed as having 7 episodes of the series (it’s titled the Complete Series Vol. 1), but there were actually 61 episodes.  I’m not sure if the 7 episodes contain multiple shorts (I’m guessing the 61 episodes of the series are actually shorts), or if there is going to be like 9 volumes in the eventual set of DVDs.  The Warner Bros./Hanna Barbera sets that have been hitting shelves recently have been very sparse, episode count-wise, so I’m afraid it might be the latter.

**Update**  The 7 episode Richie Rich/Scooby Doo set is in fact 7 collections of shorts.  There are 21 RR shorts in the set, and 21 Scooby Doo (without much of the gang, but including Scrappy) shorts.  With that in mind there should be another 2 volumes of DVDs eventually (I guess hinging on this set selling well.)  I just picked my copy up today and I can’t wait to get home and watch some of these again after 27 years…

I also updated the complete list of 80s cartoons on DVD with the upcoming release of the Complete Galaxy High set (which is available for pre-order for the awesome price of $13!)