For this week’s edition of Peel Here I thought I’d break out my collection of sticker cards from the 1987 Topps Harry and the Hendersons card set.  When this flick hit theaters I think I was just about the perfect age (10 years-old) for a goofy Bigfoot movie like this; any older and I probably would have been caught up in the smarmy mockery and ‘growing up’ that comes with the passage into middle school.  That next year I distinctly remember giving up Weird Al and the Fresh Prince for Metallica and Megadeth, trading in my roller skates for a skateboard, and Chef Boyardee Mini Raviolis for the more regular and respectable adult size Raviolis.  In fact, I think 1987 was one of the last summers where I really got a full dose of fun silly 80s movies as the Monster Squad, *Batteries Not Included, Big Shots, and Garbage Pail Kids were also hitting theaters at the same time. 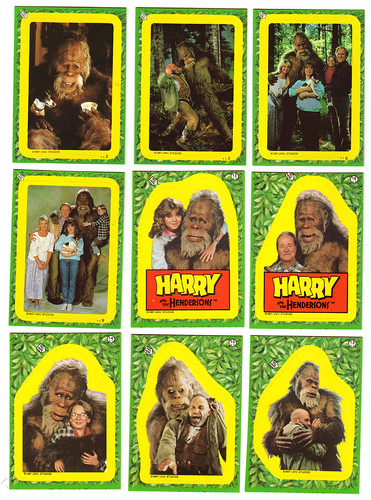 As far as HatH goes, I’ve always loved the film and feel that it has aged pretty well considering.  I think a lot of this has to do with the cast including one of my favorite actors from the 80s, John Lithgow (who starred in Buckaroo Banzai, the Manhattan Project, and The World According to Garp just to name a few of my favorites from the decade.)  Along side Lithgow were Don Ameche (who was enjoying quite the renaissance in his career at the time, along with Jessica Tandy, Hume Cronyn, and Wilford Brimley), David Suchet (best known as playing the titular role in Agatha Christie’s Poirot), and the awesome Kevin Peter Hall as Harry (who I know best as the guy inside the Predator suit as well as starring on Misfits of Science.)  Looking back I think the amazing job on the practical special effects is what really keeps my interest in the film all these years later.  I can only imagine that this would be tackled as a totally CGI cartoon affair if done today. 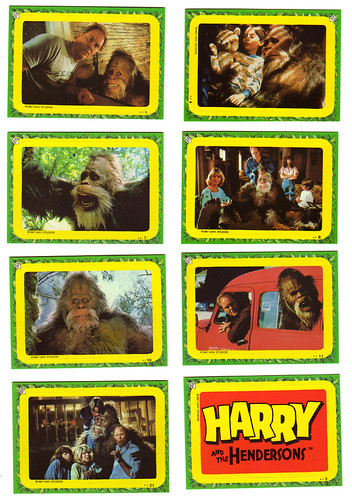 As far as this sticker card subset goes, I have to admit that I didn’t expect there to be any stickers that DIDN’T feature Harry.  At least the designers took the time to work in pretty much every memorable character, and most of the memorable moments from the film.  I also kind of dig the leafy background they went with. 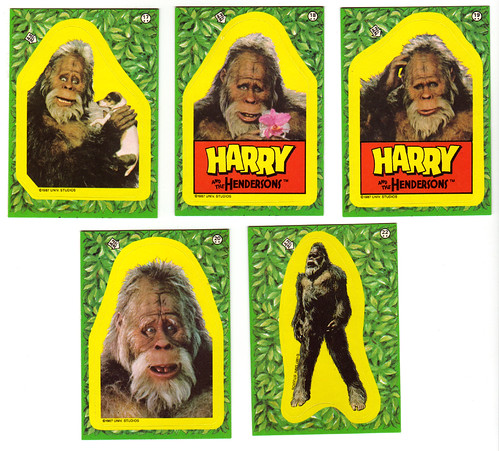 I did come across one bit of surprising info while doing a little bit of research for this post.  There was a Harry and the Hendersons TV sitcom, which aired from 1991-1993 with a total of 72 episodes.  I’ll be honest, though I’m pretty much a pop culture nerd, and I spent a good time on my butt watching TV in the early 90s, I don’t remember a single thing about this show.  Maybe I blocked it out or something, I have no idea.  I certainly didn’t realize that the property got that much mileage, and with no cartoon spin-off or toys either.  Here are the opening credits (from Youtube, and in German.) 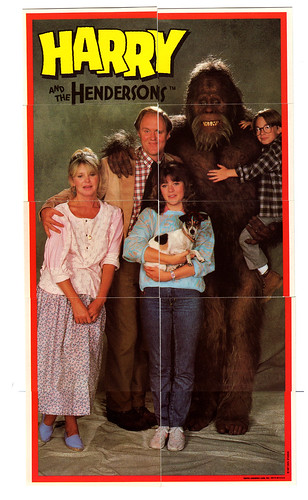 I should be back later this week with another Vintage TV Guide installment as well as another update to the complete 80s cartoons on DVD list (and hopefully the last for awhile.)

The Cannonade, and a contest reminder…