For today’s post I thought I’d dip a little later into the 80s for a look at a weird little sticker card sub-set from the 1988 Topps Growing Pains cards.  I say weird because even though I know Kirk Cameron was pretty damn big in his day, but I can think of at least ten other sitcoms at the time that seemed much more popular and more ‘worthy’ of a Topps card set.  I mean Family Ties, the Cosby Show, Roseanne, Full House, and Perfect Strangers all seem like better candidates (and a few years later there would be a T.G.I.F. card set featuring some of these shows though sadly there were no included stickers.)  I don’t know, sometimes I wonder what the guys at these card companies like Topps were thinking when they decided on some of the properties they chased after.  As far as TV shows having card series go there were some obvious choices (ALF and Mork & Mindy come to mind) and some weird ones (Welcome Back Kotter and Dallas for instance), and I would place Growing Pains in the latter category. 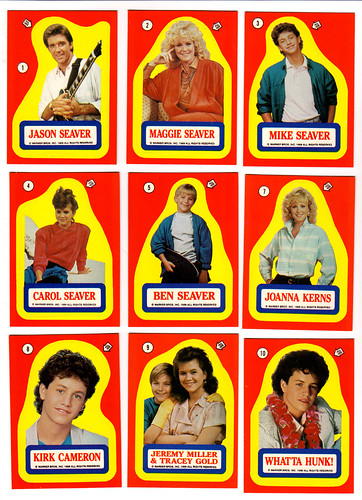 Because I was such a cheapskate while compiling my collection of 80s stickers (particularly with this set) I didn’t fight to hard with other eBayers for a complete set, so as you can see above I’m missing the #6 sticker (which featured Alan Thicke.)  I was actually quite surprised with the flow and symmetry in the design of the sticker card set when I finally got a chance to take a look at them.  Unlike most Topps sticker sets there was an almost perfect balance of characters vs. the breakout star (in this case Cameron.)  Not only does each member of the family get their own sticker, the actors are also acknowledged by name on their own as well.  Throw in the group family shot with the final sticker (below), as well as the Whatta Hunk! Cameron (with the come-hither-and-get-laid-by-me-in-this-lei look on his face) and you have a very balanced set.  In fact I think the only thing that would have made this set perfect would have been a Boner sticker (I bet you thought I was going to play the Leo DiCaprio card didn’t you?) 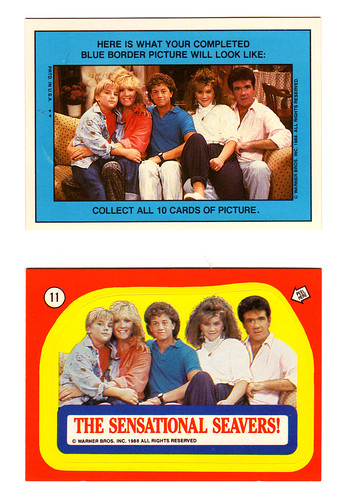 For some reason I decided not to scan the puzzle poster backs to the cards with this set because I think the missing Alan Thicke sticker was actually quite important to the picture.  Instead we’ll just have to settle for the ‘What your completed puzzle should look like…’ card.  Besides, the picture has already been repeated twice and I doubt there are any of you out there chomping at the bit to rush out to Kinko’s with the scanned art to print on a poster sized sheet of paper (or are you, and if so why?)  You know, now that I’m looking more closely at the family couch scene, I’m a little uncomfortable.  Is it just me or does it seem a little inappropriate for Tracey Gold to be sitting on Alan Thicke’s lap at her age?

I was never a really big fan of the show to tell the truth, though I did watch my fair share of episodes.  I was more of a Candace Cameron fan myself (yes I admit that I watched the heck out of Full House.)  Anyway, I should be back one more time this week with another installment of the Vintage TV Guide series…

The Cannonade, and a contest reminder…