Well, I did a little bit of website maintenance this past weekend, most of which is geared towards making it easier to browse the archives.  Well actually particular portions of the archives like the Saturday Morning Cartoon ads and the podcasts I’ve out up.  I whipped up a couple new banners (which I’ve placed on the sidebar to the right) so the majority of my Essential stuff and columns (Hostess Ads, Cartoon Commentary!, Peel Here, Saturday Morning Cartoon Ads, TV Guide, etc.) are now more accessible.

While doing this I remembered that I actually found a new SMC ad from the 80s (which browsing through junk comics a couple months ago), so I thought I’d go ahead and post it here… 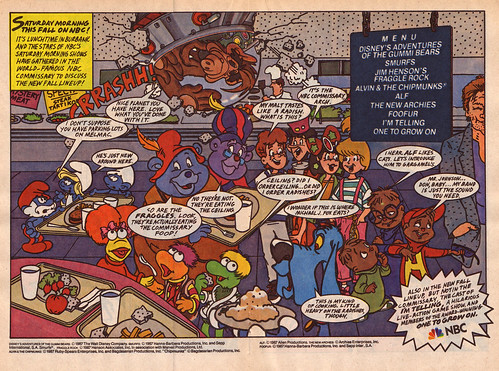 The ad is for the 1987 cartoon lineup in NBC Saturday mornings and featured some long running shows like Alvin and the Chipmunks, ALF, Foofur, the Gummi Bears, and the Smurfs as well as the cartoon incarnation of Fraggle Rock, and the New Archies cartoon.  It’s basically in keeping with the style the NBC ads were taking since around 1985 or so and featured characters from these cartoons mingling with each other which I think is a pretty fun way of illustrating the lineup.  I also dig the half drawing of Don Johnson to the right.  Now why wasn’t there an animated Miami Vice?

I’m glad I found this one because it helps to plug the three-year gap between the ’86 and ’89 ads in my collection.  Again, if there’s anyone out there that knows of any ads (in particular ABC and CBS) from the late 80s please drop me a line via e-mail or you can leave a comment on the blog.  Pretty soon, after I’ve completed sharing my collection of vintage TV Guide Fall Preview issues, I’ll go ahead and gather up all of the black and white cartoon ads for yet another Essential list.

I was a Teenage Mutant Ninja Gamer & Other Strangeness

Marmalade, a Duffle coat, and a bear from darkest Peru…