Peel Here #69, Grab your hoverboards, and get ready for some ahead-of-its-time 80s nostalgia!

Before I jump into this week’s Peel Here I wanted to take a second to say that I’m making a little head way on the Branded in the 80s print edition/magazine front.  For two days I was able to hold the finished product in my hand, though sadly because of annoying circumstances I had to send the entire batch of magazines back to the printer to be fixed.  The light at the end of the tunnel (at least for my own poor nerves) is that I think I did the best job I was able to with the time I had, and even though it’s not exactly what I want the magazine to be, it’s a very exciting first step.  I can’t wait to take these up to Wizard World Chicago at the end of June (where I’ll be exhibiting in Artist’s Alley.)  If nothing else, it’s got me jazzed to work on future issues, which has in turn started the creative cogs in my brain turning (though they’re heavy and quite sluggish at the moment.)  If all goes well, I should have a link up to purchase the book sometime right after WW: Chicago.

Lets get on to the meat of today’s post though with my almost complete collection of the Topps Back to the Future II sticker cards from 1989.  I’ve been working on this site for just over two years now and I can’t believe that I’ve yet to talk about this film series all that much.  I have a very vivid memory of going to see the first film on the 4th of July at a theater near the Altamonte Springs mall near Orlando, Florida back in 1985.  It was a packed house and by the time my family made our way into the screening room the only seats left were smack dab in the front row all the way on the right.  It was my first experience truly seeing a film that appeared larger than life, and it completely blew me away.  After the flick there were fireworks, hotdogs, and plenty of begging my parents to replace the family copper colored Mazda 626 with a De Lorean DMC-12.  Though my parents never caved under my pressure (nor did they when I begged them to get a Lamborghini), there was one family in our neighborhood who was jazzed enough to buy one and you can imagine how often I would go out of my way to pass by their house on my way to school.

As an 8 year-old who looked up to Michael J. Fox as if he were my own older brother, I took a special pain at the ‘To Be Continued’ title card at the end of the first flick.  When was I ever going to see the further adventures of Doc & Marty in their wonderful time machine?  The four years until the release of the sequel in 1989 were a special little hell for me, particularly in the 80s world sans the internettubes for news and rumors to tide me over.  Unfortunately, by the time it did roll around I was already switching gears (in the fanatic department), becoming a bona fide Bat-a-holic the summer before BTTF2 was released.  That didn’t stop me from seeing the flick mind you, I was just in a different headspace than when I saw the original.  It didn’t help that there were some subtle cast changes (Crispen Glover was replaced by Jeffrey Weissman and Claudia Wells was replaced by Elisabeth Shue) and that the flick was playing off of the whole ‘actor playing multiple parts’ thing that Eddie Murphy was beginning to make a career out of.  For some reason that just didn’t play well for me the first time around. 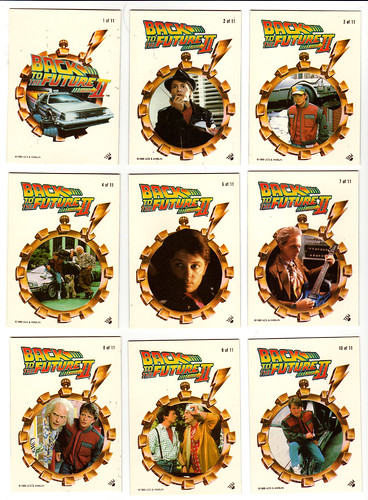 The one aspect I seem to remember the most from the BTTF2 release was a promotional tie-in at our local Pizza Hut.  They were giving away goofy futuristic sunglasses (in all sorts of wacky shapes and colors) with the purchase of a personal pan pizza (I believe, my memory is a little cloudy on this.)  My pair were yellow and pink and featured weird triangular frames.

As far as these sticker cards go, they aren’t bad though they’re a little too over-produced for my liking.  For some reason the designers of these stickers omitted the die-cut feature which was so prominent in Topps sticker card fare up to this point, and were in full blown advertising mode, what with each sticker featuring a giant logo with the title of the flick.  I’m missing card #5 from the set, and for once Jeff Allender’s House of Checklists has let me down as far as determining whose mug is on that sticker.  Otherwise, I’m a tad disappointed that there weren’t more characters featured (a future/old Biff pairing would have been nice), but at least the designers didn’t eschew Doc completely in favor of Marty. 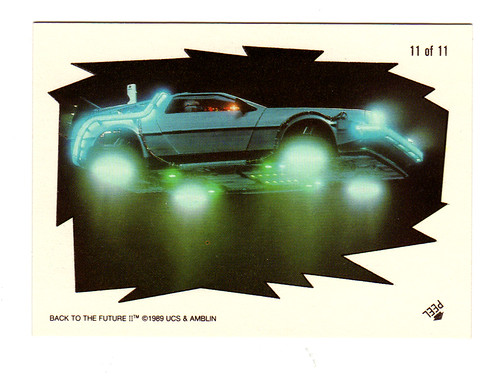 There are also a couple nice shots of the De Lorean, both a practical image (directly above) and a painting (sticker card #1.) 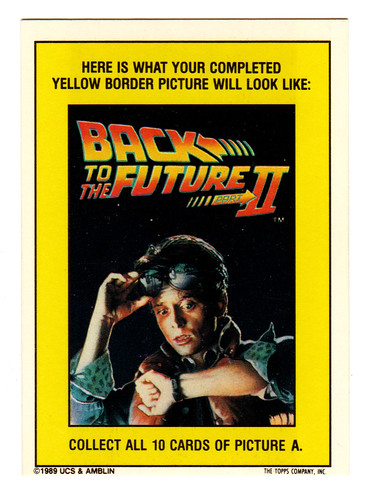 As far as the puzzle on the back of the stickers goes, it didn’t hurt all that much to be missing #5 as it was a bottom corner piece and it doesn’t interrupt the flow of the painting all that much. 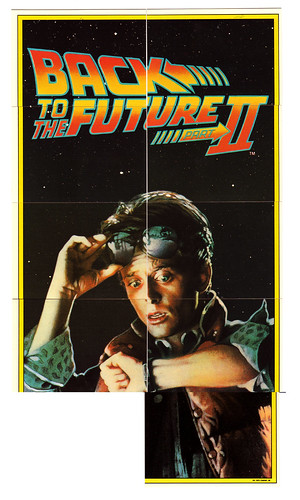 Anyway, I should be back this week with another vintage issue of the TV Guide Fall Previews, most likely from 1982.  Also, I’d like to put a shout out for a list I put together of all the 80s cartoons available on official DVD releases in the US.  Not only is this functioning as a checklist for releases, but it’s also a way you can help support Branded in the 80s if you so desire.  By clicking on any of the titles (which will take you to that cartoon’s Amazon.com listing) and then making any purchases, a percentage of the purchase will bounce back to me here, which I’ll use to fund the site.  No pressure, just wanted to let everyone know that it’s there.  So until next time, make sure you don’t mack on your mom if you find yourself traveling through time…