I thought I’d do something a little different for this week’s Peel Here column. Though I’m still going to post some stickers, I’m also going to throw out some long lost food memories that sort of tie into the stickers (as well as some others that don’t.)

Something that I don’t have nearly enough of in my vintage sticker collection is food premiums. If stickers fit the definition of ephemera, that stickers which were only available as prizes or extras with either prepackaged or fast food should (in my mind) be a great example of ultra rare ephemera. I’ve talked about this before, but the idea that full sheets of stickers from 20-odd years ago are still floating around on the secondary market is just amazing to me considering they were designed to be peeled and stuck to things. For me, the disposability of a sticker premium is just tripled. Not only are these stickers blatant advertising from the product purchased, but also it’s not something chosen by the owner.

Who buys a box of cereal just to get some stickers? Okay, as I typed that last sentence I realized that there are actually a lot of kids (and grown-ups) who might do just that, but even so aside from sticking them in a sticker book or on the side of a bureau or shelf, who is keeping these mint on either their original backing or in the cellophane they came wrapped in?

Regardless, sticker premiums seem pretty rare to me, at least in the ‘finding them on eBay’ department. I only managed to find a couple of sheets, one of which is a horrible scan (I screwed up while messing with the DPI and image size and didn’t realize I fuggled it up so bad.) First up we have a sheet of stickers that were originally found in a box of Cap’n Crunch’s Choco Crunch (from sometime in the mid-80s.) 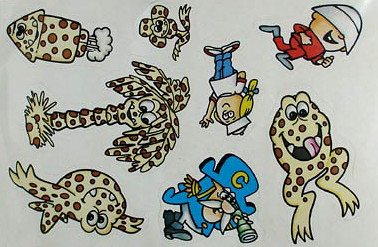 Though I have very fond memories of this cereal in general (it, along with the Crunchberries variety, were some of the only good cereals my mom would let me have growing up) I don’t remember actually liking the chocolate flavored bits mixed in with the regular Crunch cereal.

Next up we have a sheet of stickers that were originally found in a package of Giggles cookies (again, from sometime in the mid-80s, I’m not sure what year as the stickers weren’t dated.) 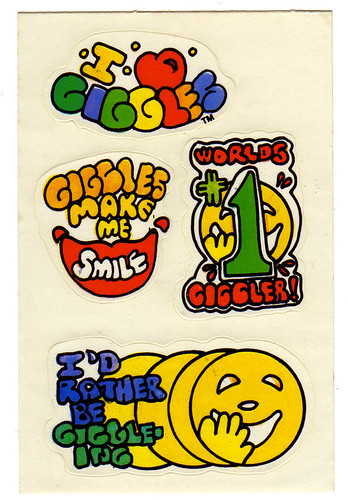 Though my mom didn’t buy sweets on a regular basis (at least not for the whole family – she always had a stash of Milano cookies for herself), we did have our fair share of Oreos, E.L. Fudge, and Giggles cookies in the cupboard (as well as some other exciting cookies I’ll get to in a minute…) Though I remember the silly happy face shaped cut into the cookies and the fact that they were basically just Oreos, I’m kind of cloudy on the rest of the details. I seem to remember that they were available in Vanilla, Chocolate, and a mixture with both on one cookie, though I can’t back that up. Also, for some odd reason my memories of these cookies are also tied to the short lived Quackers snack crackers (which were a variation on Cheez-Its or Chicken in a Bisket crackers but were flavor blasted with either Ranch, Nacho Cheese, or Sour Cream and Onion powders.)

Last up today I’m going to point outside of Branded to something I stumbled upon a few months ago that left my mouth agape for a minute or two. I recently ran across Jason Liebig’s Flickr account and all the wonderfulness contained within including scans of old T-Shirt Iron-Ons, as well as a plethora of stickers, candy packaging scans, and other great bits of ephemera. Included were some amazing scans of some old Return of the Jedi Pepperidge Farm cookie packages that hit me in the gut like a cold fist. (Click on the images to be whisked away to Jason’s Flickr gallery)

I remember eating the living heck out of these as a kid and I was so happy to find these images on the internets. In addition to Jason’s great Flickr gallery, he also takes part in a fun project preserving old Christmas Wishbook catalogs from the past, so if you’re bored and have a few hours to kill you’ll find a ton of great stuff to look at.

You Can’t Do That in Comic Strips…

IT’S ALIVE! Branded gears back up for the 2014 Countdown to Halloween

Day 10 of the Halloween Countdown: The background makes the cel…