I think I’m going to take a little break from Garbage Pail Kids here on Peel Here for a bit, if only to get the sticker columns flowing again. I still have to scan in four or so sets of sticker cards and I keep pushing it off when I’m at home. On the other hand, I still have plenty of other stickers that I scanned a good bit ago, and I kind of want to switch gears for awhile.

For today I thought I’d bust out with my collection of Rambo stickers, which were part of a subset of Topps cards that came out in conjunction with the second flick, First Blood, Part 2 (probably the silliest name for a movie ever.) Though the film’s title is pretty weak, its star certainly is not. If I had to hazard a guess, I’d say that at the time First Blood, Part 2 hit theaters Sly Stallone was probably hitting the height of his popularity, as were the 80s action flicks he helped usher into the decade. For my money this is about as far as an action flick could go, crazy believability-wise, without side stepping into fantasy, sci-fi, or becoming a parody. Don’t get me wrong, it’s not really all that believable, but it’s not quite Commando either (also don’t get me wrong redux, I love both flicks, in particular Commando.)

I wasn’t allowed to watch the flick when it first came out, I was still a couple years away from completely breaking my parents of their justified urge to try and shield my 8 year-old eyes from uber violence. This didn’t stop me, and an entire generation of young boys, from idolizing the film, character and man by lusting after lunchboxes, T-Shirts, branded school supplies, and the coup de grace, the plastic replica hunting knife (with realistic hollowed out handle containing fake matches, string, and other odds and ends, and capped off with a glass compass. That knife was my generation’s Red Rider BB Gun. If I remember correctly the knife also came packaged with a glow-in-the-dark replica of his little jade pendant necklace.

Anyway, this subset of cards was released in 1985 by Topps and contained 22 stickers, the backs of which made the standard puzzle poster… 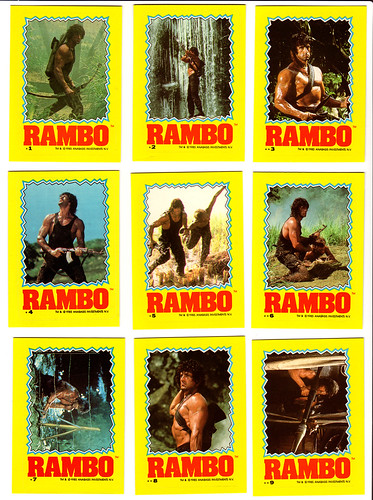 As far as Topps sticker subsets go, this is probably one of the loudest in terms of design and color choices. Other than the fact that there were already a ton of sets that featured Red borders, I’m not sure why they didn’t choose to go with that, or a nice hunter green. The yellow just sort of hurts my eyes. I also think the die-cut on the stickers is kind of boring, and since it encompasses the movie title and card number anyway, it’s sort of pointless. As far as the choices for screen captures go, I don’t blame the designers in pretty much completely sticking to Sly in fun action poses, though I’ll be honest, I was kind of hoping that there would have been a torture rack sticker (as inappropriate as it may have been.) I guess I’ll just have to live with the skinny dip into the muddy leach water instead (in this next set of stickers…) 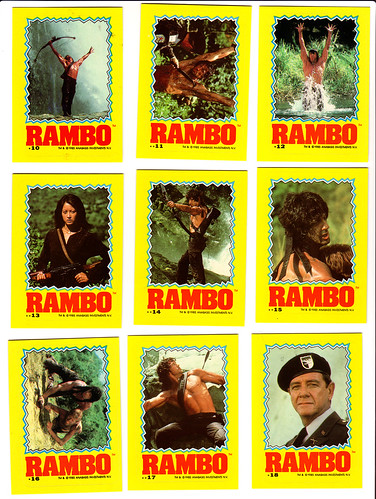 One thing I found kind of odd about the pictures on the stickers was that there seemed to be an awful lot of captures where Stallone is reaching or jumping up with arms outstretched. There’s a fourth one in the next set below. Just seems like a red flag would have been raised in the design process. I wonder how many kids opened up a pack of cards and were supremely bummed by getting a Richard Crenna or a Julia Nickson sticker? 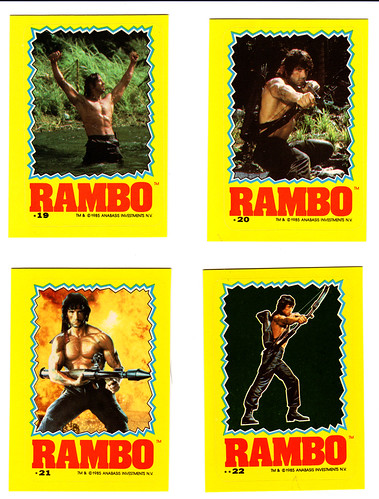 If nothing else, I’m glad they included the two pieces of poster art (above) as stickers. I’ve always been a fan of this, if only because poster art used to be so awesome in the 80s what with all the paintings and stuff. Beats the heck out of all the bad Photoshop jobs we see these days. 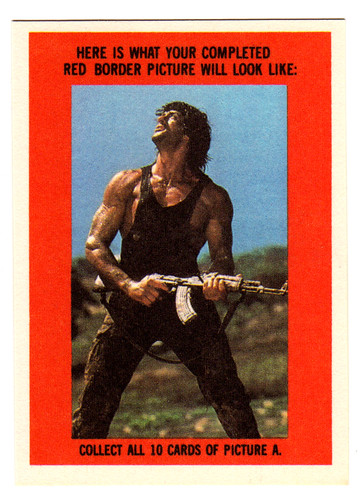 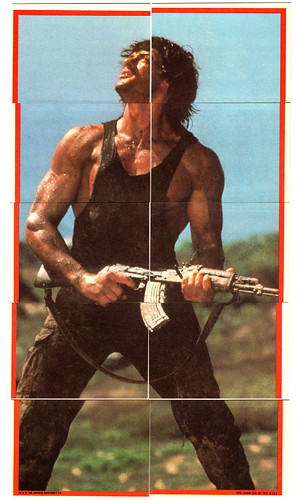