I thought I’d take a second to note the passing of Steve Gerber. Initially I wasn’t going to write about this as I feel that I’m the last person in the world that is qualified to comment on either Gerber or his work. I didn’t know him personally (or even impersonally for that matter) and I’m only beginning to become familiar with his work in cartoons (and though I’ve owned Essential editions of both Howard the Duck and Man-Thing for a while, I’ve only read through a little.)

Then I got to thinking about how I came to be introduced to the man. I guess in some way I’ve been familiar with his work ever since I started collecting comics in the 80s. I am one of those people that can proudly admit not only that I enjoyed the Howard the Duck movie, but also that I saw it in the theater when it was first released. Granted, I realize that this isn’t the preferred incarnation of Howard, and if I had to hazard a guess I’d say that Gerber wasn’t all that pleased with it (there’s a quote to that effect on the HtD movie wiki page, but, well it is the wiki page), but it made enough of an impression on me to get me excited about the character, if only in the most general way concept-wise. I’ve also been vaguely aware of the character Man-Thing (yeah, I realize Gerber didn’t create him, but he sure did put his stamp on the character throughout the years), and I know I’ve watched a bunch of the cartoons he wrote, even if I didn’t realize it at the time. Honestly, that’s the reason I’m putting this up. Toward the end of last year I began taking a closer look at the cartoons I grew up loving. My goal was to stop and smell the roses if you will, taking the time to find out about the people behind the scenes, the writers, producers, voice talent, etc. I decided to start with the Dungeons and Dragons cartoon and one of the first people who really stood out to me in terms of their writing style was Steve Gerber with his one credited writing contribution to the series.

Long story short, I really liked that episode, realized that he worked on other shows that I loved and made it a point to pick up some more of his comics so that I could get a better handle on his writing.

I’d also recently started keeping up with his blog, and it came as a pretty big shock on Monday to read of his passing (on yet another blog I discovered via researching the D&D cartoon, Mark Evanier’s News From Me.) Again, I didn’t know Mr. Gerber personally, but I was getting to that place where I was becoming familiar with his world, his words, and his characters. If nothing else I’m glad that the long battle he was fighting with his illness is over, and I hope that if there is another place where people move on to he doesn’t have to fight anymore (as I’ve been reading he seems to be a guy who was always willing to fight the good fight.) 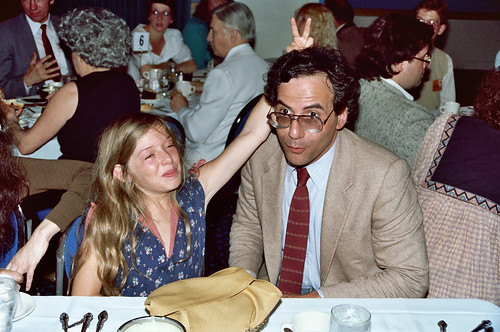 Steve Gerber from the 1982 San Diego Comic Con.
Photo used with permission, was taken by, and is copyright Alan Light.

I guess what I’m getting at is that if there’s anything at all to take away from my post, it’s that if you get a chance check out some of his comics or cartoons and maybe it’ll lead you to some stuff that you really enjoy (either his own or through the people he worked with.)

Enter the Lab for Day 14 of the GPK Halloween Countdown!

Rebuilding the 80s, brick by brick…

The Repo Man has entered The Grid!