I’m finally back with another late edition of Peel Here. At this rate I’ll be sharing my Garbage Pail Kids collection for three months instead of the planned two. Anyway, I wanted to give a quick shout out to Devlin from Bizarro Wuxtry in Athens, GA who not only has a great shop full of comics and a million odds and ends, but also the only place I’ve seen in Georgia that has GPK singles for sale. I managed to pick up all the cards I’ve been missing from series 8-11, as well as the rare triplets from series 4 and a few series 2 stickers as well.

This week I’m slapping up my complete collection of 6th series cards, which were released by Topps in 1986. This was at the height of my GPK collecting phase, which I think is kind of strange considering that it apparently only lasted for about a year. All of the sets I remember collecting came out in 1986, so either I have a very skewed memory of my time collecting, or there is some truth to the idea that time seems to pass differently when we’re kids. If you’d of asked me how long I spent collecting GPKs before I started taking a close look at when they were released, I would have sworn it was at least three years. Actually, I’ve spent more time collecting the All New Series cards (which have been coming out since around 2001 or so) which just seems weird.

Anyway, there are 44 different paintings in this set (for a total of 88 sticker cards) and once again John Pound cranked out most of them (28.) As before, Tom Bunk shared some of the load with 7 paintings, and newcomer James Warhola pitched in 9 pieces. Bunk handed over the art duties on the backs of the cards to Jay Lynch, who did 18 Bazooka Joe comics parodies starring GPK characters from the first few series. 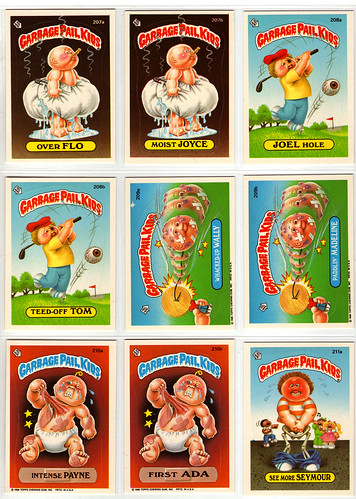 For some reason this set comes off a little more toned down in my opinion (from the slightly more vicious 5th series) as the concepts seem to range from more or less normal (GPKs as vacuum cleaners, slinky dolls, and flags) to the more bizarre yet non-violent (GPKs with trees growing out of them, made completely from garbage, or painting themselves by number.) Over all it’s a decent entry into the series, though not terribly interesting. 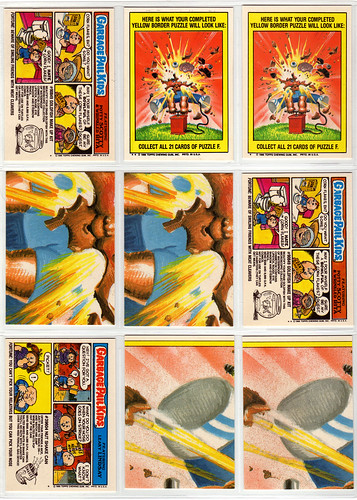 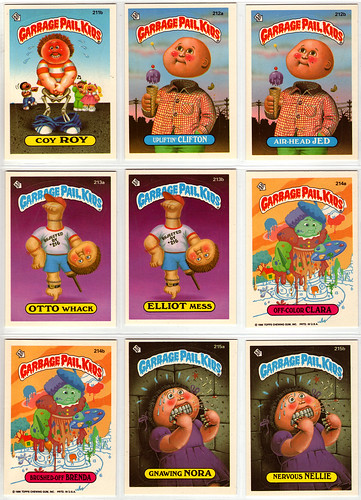 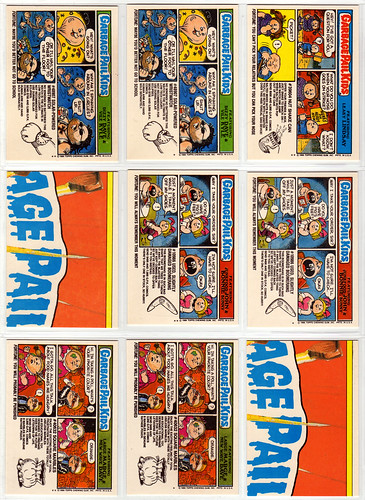 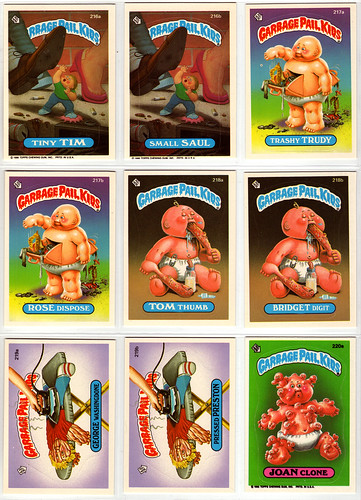 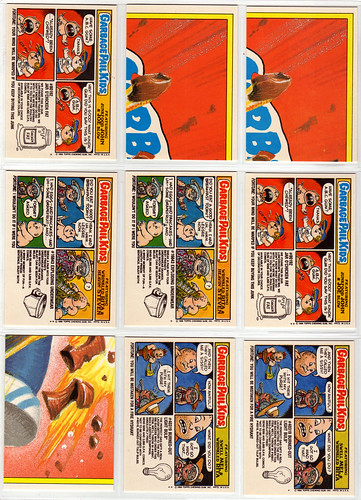 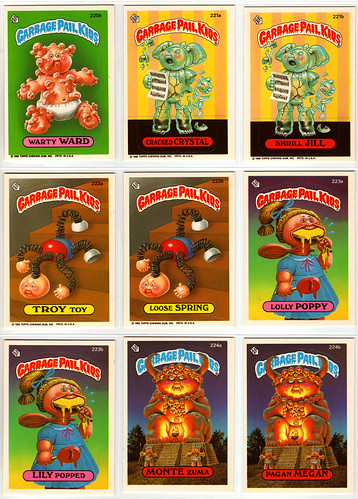 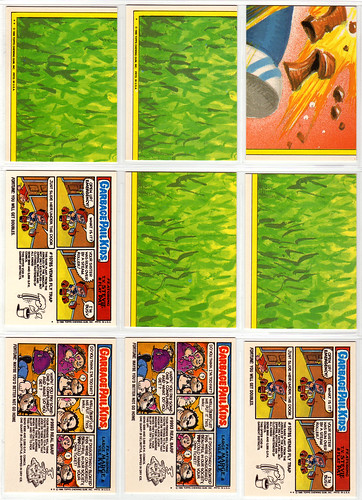 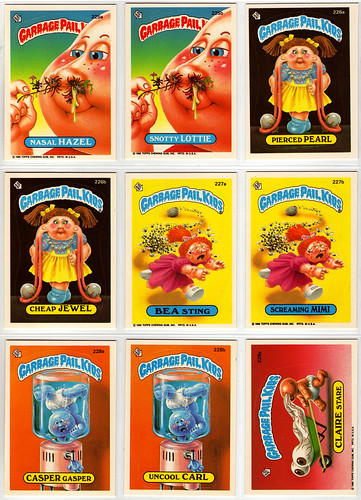 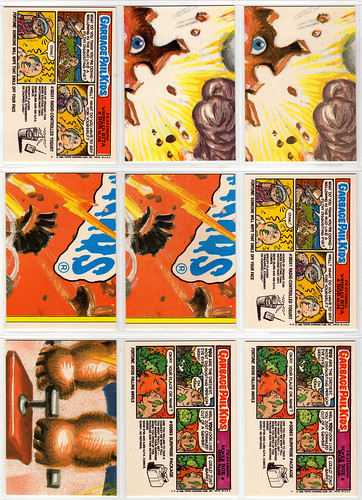 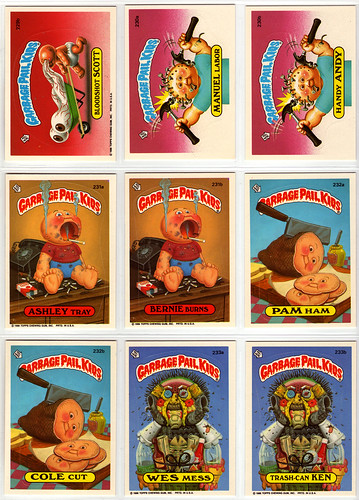 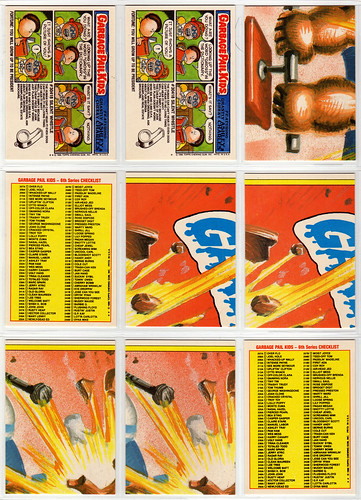 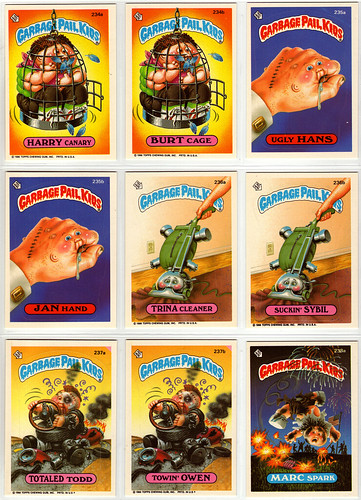 I thought it was kind of interesting that we’d start to see some of the amazingly overused visual jokes, which would really begin to hamper the series as it went on, particularly in the last couple of sets as well as all of the new series. An example of this is on stickers 235 a&b (the stitches/scar.) I think later on we start to see a lot of repeated imagery (cracks, scars, pimples, band-aids, snot, puke, poop, and pee) partly because of a lawsuit Topps settled with the makers of Cabbage Patch Kids, and partly to define the image of what GPKs would become. Unfortunately it gets to a point where a lot of these visual cues don’t make much sense in the context of the card concepts. 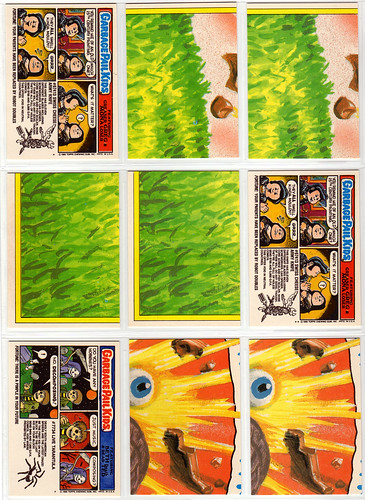 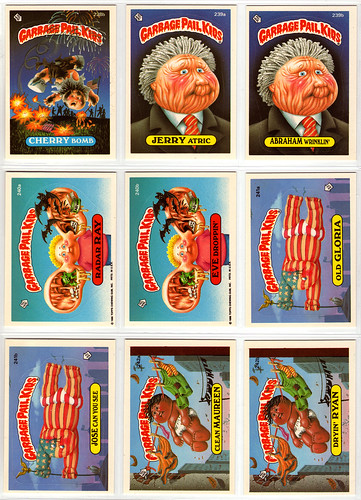 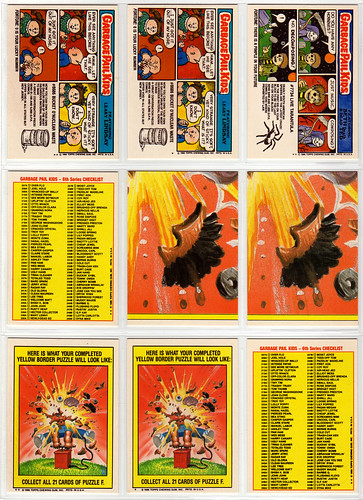 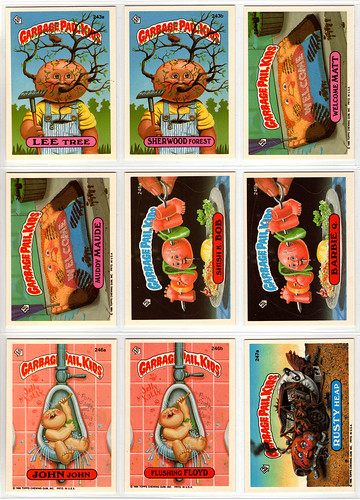 In this set we also get to see some of the concepts from earlier sets being reused or at least reworked. In the page above cards 246 a&b are very similar to the Potty Scotty card from the 1st series. Similarly on the next page there is a variation on one of the most iconic GPKs, Atom Bomb (from the first series) in the form of Dyna Mike and Newly Dead Ed (cards 250 a&b.) Again, this is something we’ll see more and more as the series goes on. 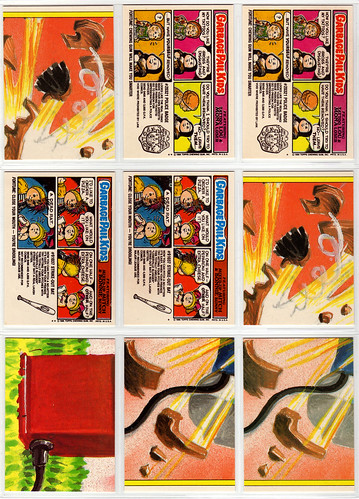 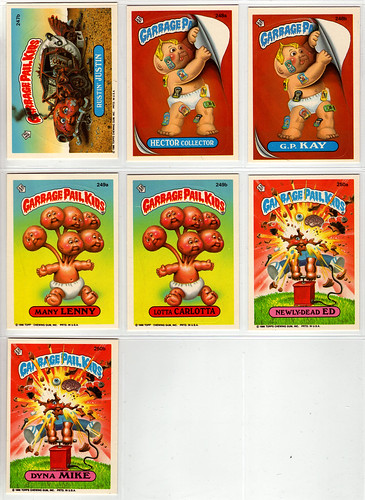 Of all the cards in this set though, my favorite as a kid had to be 248 a&b. Not only did it directly reference GPKs, it also takes pains to break the 4th wall playing around with the concept of sticker cards. I’ve always loved this idea when I see it in marketing and advertising (I seem to remember packages of cereal that looked like they were torn open, but it was just the artwork ont he package.) Heck you see stuff like this in comic books all the time (where a page looks like it’s been torn away revealing the page behind it.) I think this sort of thing pops up in the Ambush Bug comics, though I can’t remember for sure right now (I’d have to dig into my comic boxes in storage.) 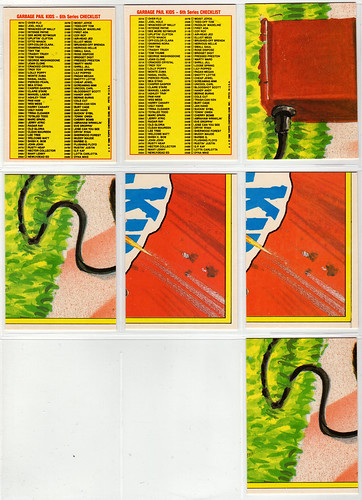 Back to the Future: The Other Marty McFly Theorem

Alternative Movie Posters bringing the Art back to Design

PCP #3, There’s a little strange kid in all of us…