Well, I’m starting to feel a little better about my posting habits after the holiday season. I know it’s only a couple of posts a week, but it feels like I’m building up a little head of steam anyway. What I really need to do is to get back to my Cartoon Commentary posts, but all in good time. Anyway, here we are again at the end of the week, and lately that means another edition of Peel Here, and if you’ve been paying attention this month, or care to scroll down the page you can see that I’ve been sharing my collection of Garbage Pail Kids sticker sets. Today I’m going to keep plowing through the collection with the complete 5th series that was, like the last two, release in 1986.

This was the series that I remember marked the height of my collecting. My mother surprised me one day by bringing home an entire box of packs that I spent the rest of the evening opening and sorting on the living room floor. Not only was this the first time that I received so many cards all at once, it was also the first time that I acquired an almost complete set of the stickers. Whereas the 4th series seemed hard to complete because of the rarer triplet cards, and the 3rd was difficult because we had a hard time finding any, it was pretty darn easy with the 5th considering I had a whole set plopped in my lap. I was however, missing a couple ‘sister’ cards, and I never found either variation on card 180, which always bugged me. How could I still be missing cards even after getting an entire box of packs? Well to my young mind it seemed like a travesty. Well years later with the power of the Internet and eBay I’ve finally managed to secure a complete set which I’ll now share… 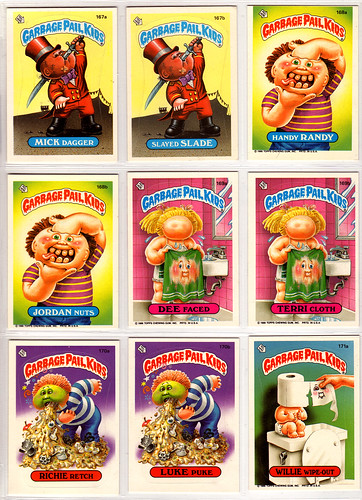 Like I mentioned last week, this set seems to mark a changing point in the overall tone of the GPK series, which seemed to become a little more vicious with each new set. If you compare the concepts in this series to the last you see that there are more stickers depicting self-mutilation, cannibalism or violence. Now before this seems like I’m on an anti-GPK rant here, please don’t get me wrong. I don’t have a problem with this tonal shift and I don’t think it’s all that much of an issue socially, I just think that it’s interesting to note that conceptually the series started to get a little more vicious and disturbing. I think the this is illustrated in the concepts, where in the first four sets it was relatively rare to see characters doing disturbing stuff (as opposed to having it wrought on them), yet with series 5 and on there are more and more instances of characters causing the violence. For instance there are two relatively disturbing images in the second series that feature characters getting shot (57 a&b and 82 a&b), again by outside forces, yet in series five the two most disturbing images (personally and violence-wise) feature one character shoving a sword down his throat and out the back of his head (167 a&b) and another hanging himself (181 a&b) (again characters actively being violent.) Again, I’m not trying to come off prudish, it’s just an observation. 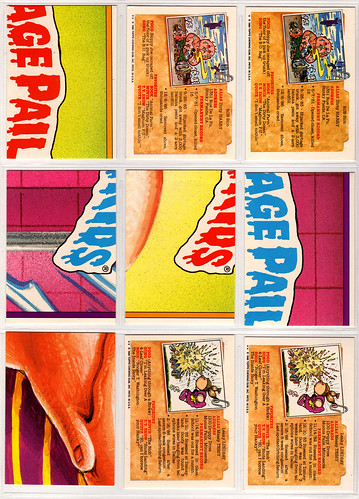 For this series the designers opted to switch from the wanted poster card backs of the last two series to a very G.I. Joe-packaging-influenced file card concept featuring characters from the 1st and 2nd series stickers. Again, Tom Bunk drew the card backs, while the art duties on the card fronts were split between Bunk (12 paintings) and John Pound (28 paintings.) The designers also decided to go back to having two different puzzle posters on the card backs. 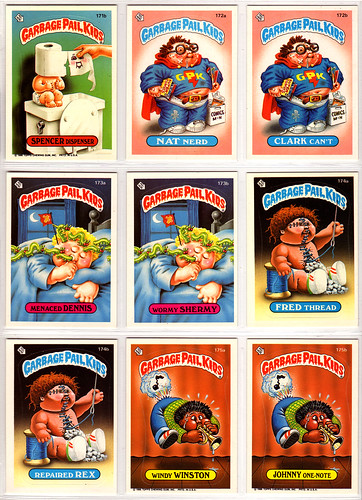 Something else that I thought was kind of interesting was that I noticed that a lot of concepts were being done again and again. This series contains six concepts that were almost note perfect for cards in the 1st and 2nd series sets. There seems to be a lot of repetition of the following concepts: Baby with horrible teeth, a doll with it’s stuffing coming out, a character puking up all sorts of nastiness, a character playing with their own snot, a character getting electrocuted, a character as a trash can of some sort, or a characters that is either a toilet or is swimming/sitting in/etc a toilet. Just a thought. Also, we get to see another character above (Windy Winston) that made it into the GPK movie. 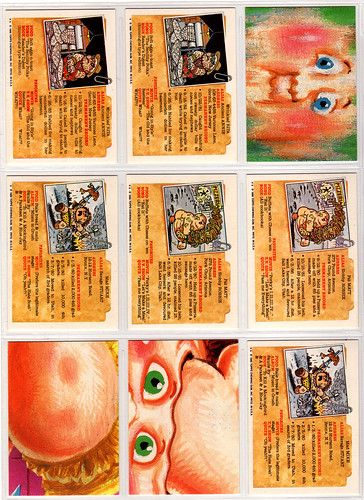 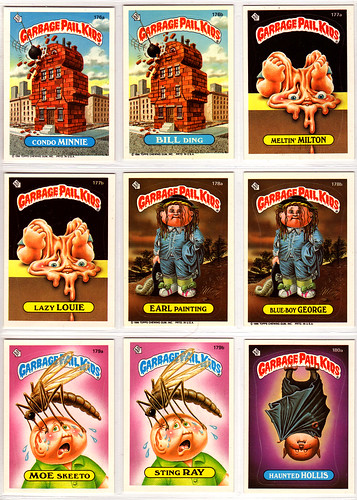 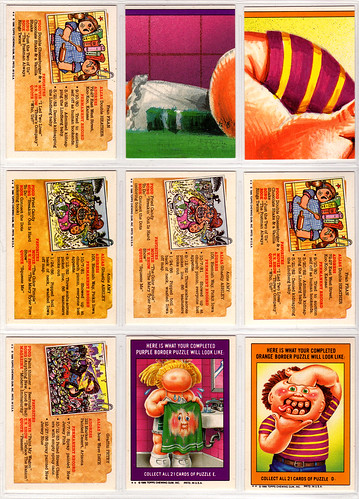 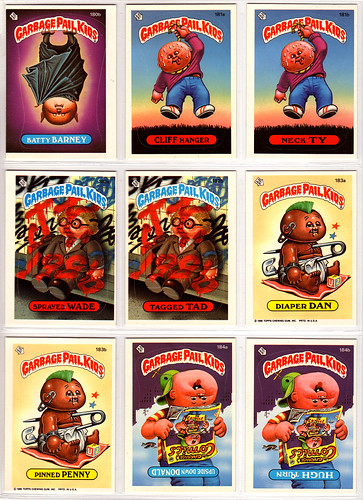 In the above scan we can also see one of the more common error cards, the off set printing (180b) which ends up having the image shifted over too far to one side. 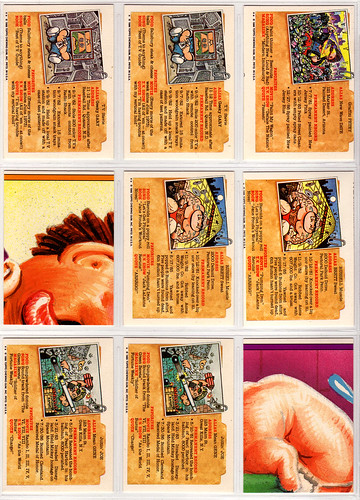 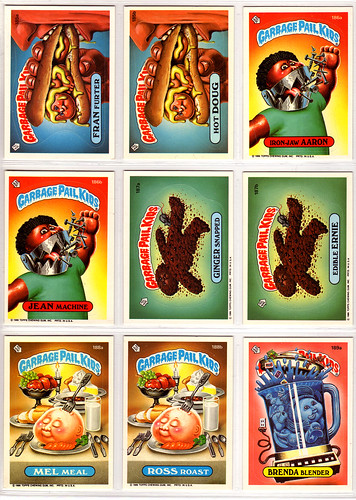 If I had to pick a card that I thought was the most disturbing in this set, I think I’ve have to settle on sticker 185 a&b. There’s something that just screams wrong about a tiny named GPK slathered in mustard and put on a bun like a hotdog. Is it just me? 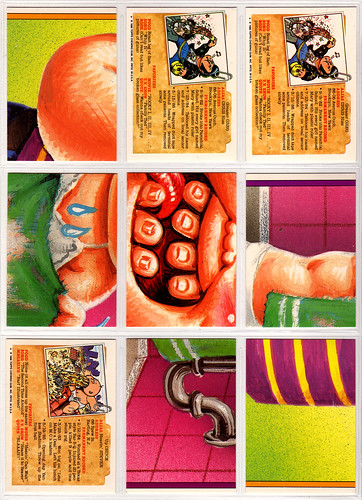 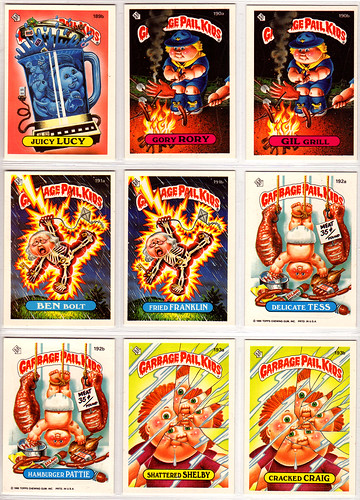 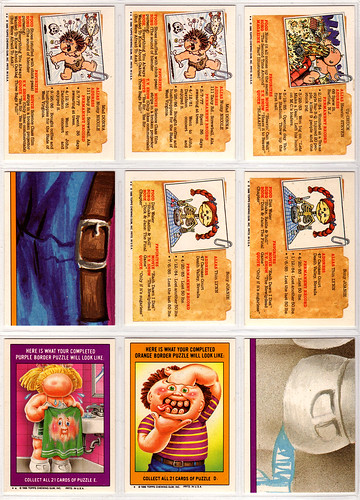 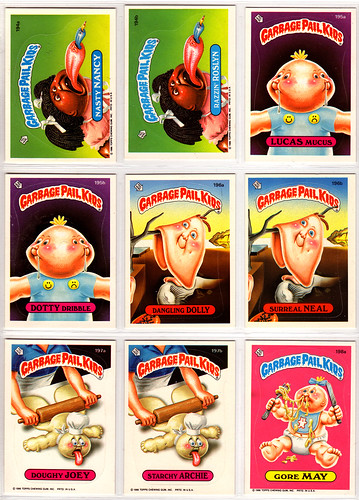 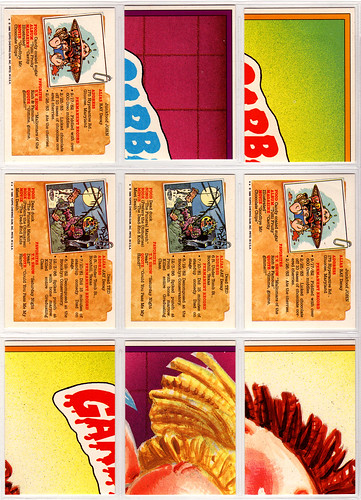 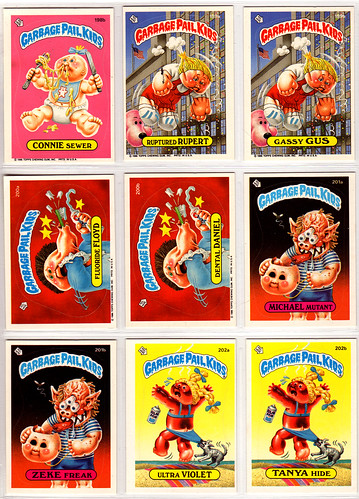 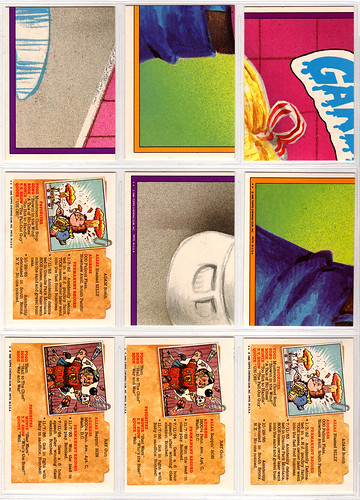 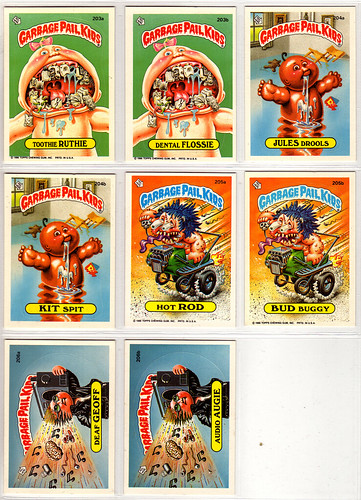 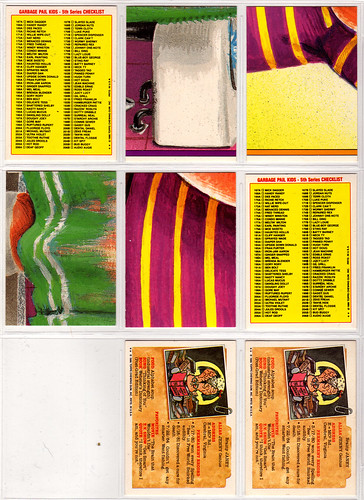 Next week I’ll finish off January with the complete 6th series. Next month we’ll hit 7-10 which will finish off my collection of GPK stickers completely.

Bonkers will be bonking you out again soon!

Say you don’t want it…