So for the time being this post will finish off my collection of Hostess comic ads. Like I’ve mentioned before, I think there are still about 30 or 40 more ads that I haven’t been able to find yet, so that’ll probably be a project I work on over this coming year.  Right now though, lets take a look at the last 10 DC ads in what I like to call the Essential DC Hostess comic ads Vol. 3, Part 2: Cupcakes 1975-1980.

Shazam in the Cupcake Caper 1975 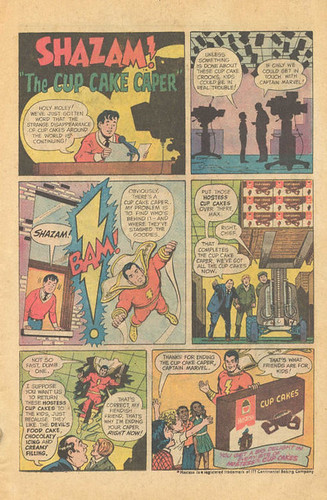 Wow, that is one straightforward Hostess ad.  Bam, cupcakes are missing.  Bam, Shazam restates the obvious.  Bam, he stops the brilliant Cupcake Caper. Bam.  BAM BAM BAM.  If nothing else, I’m beginning to find some possible context clues for why the last Shazam ad was written so (to me) oddly.  So does young Billy Batson work at the TV station?  If so that would go a long way to explaining why he was kidnapped in that ad. 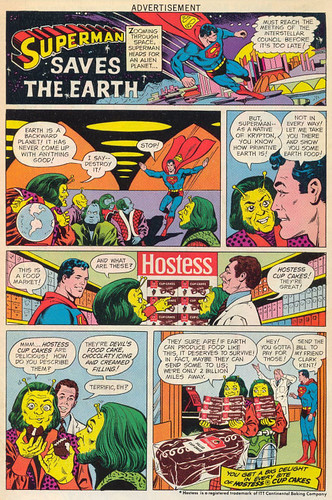 Man I never realized that Superman sat in on such universe plotting council meetings.  Thank god he eats cupcakes and not Spam or the whole planet might have gone up in a puff of smoke that fateful day.  Also, I love how in comics alien worlds are often delineated by the lack of any sort of atmosphere, having only a vast blanket of stars in the sky.  As silly as it seems, it really is a nice artistic short cut. 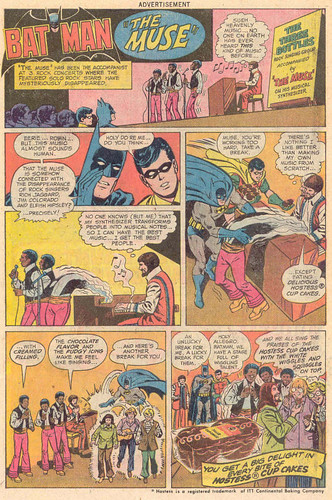 Besides the fact that Batman and Robin are stepping out attending a concert in full bat-suit glory, I really dig this ad. In particular I love the switch that the Muse makes from internal monologue to exclaiming his love for Hostess cupcakes mid thought. I wonder when in ’77 this ad was written as there’s a nod to Elvis in it. Not a good year for the king.

Batman and Robin in Birds of a Feather 1977 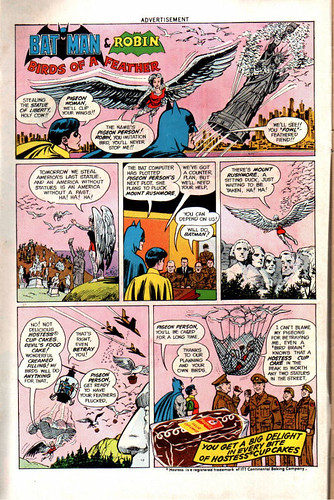 You know, I would have loved to see this ad end with Batman and Robin watching as Pigeon Person’s plan crumbled when she realized that even an army of pigeons can’t pick up a mountain… 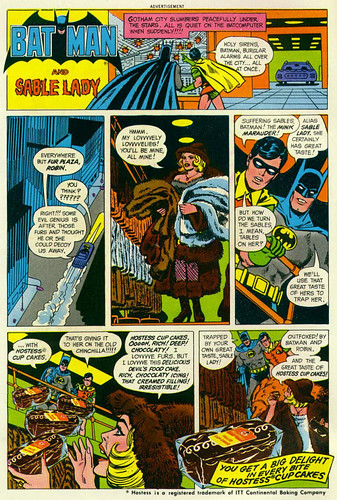 “That’s giving it to her on the old chinchilla…” Um, okay.  Holy inappropriate Batman!

Wonder Woman in the Maltese Cupcake 1977 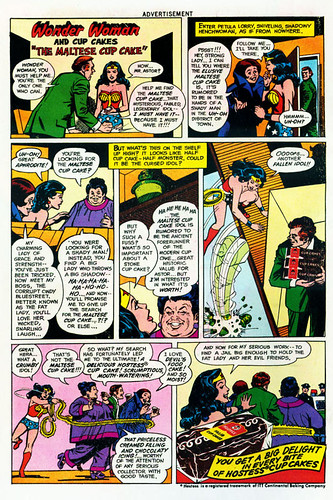 I have absolutely no idea what just happened in that comic. Seriously. 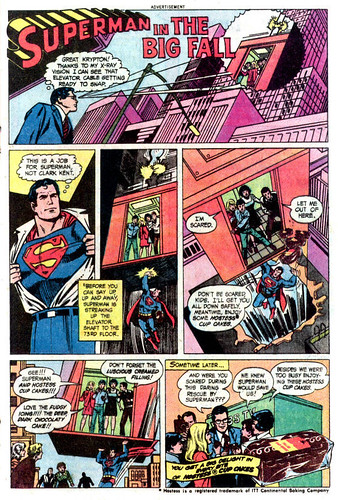 Wow, that was total overkill Clark! You know, you could have just stopped the elevator from falling and gently let it come to rest at the bottom of the elevator shaft. There was no call in flying it out of a building, and in assuming that it would burst through the roof without hurting the occupants who were so blissfully unaware of the danger because they had their mouths full of chocolate-y goodness. Sheesh, that seems more in line for a Hulk Hostess ad… 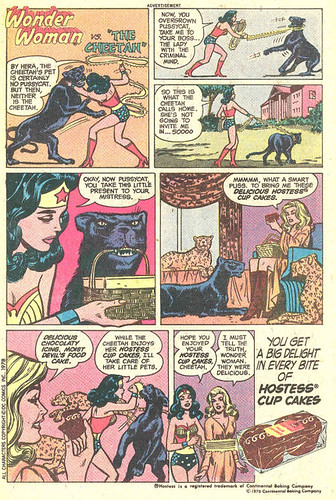 Well that was kind of a mean trick to play on the cats. Lure your way in and then slap them around instead of the master. I guess it was bad form to have a cheesecake cat-fight in a 70s cupcake ad. 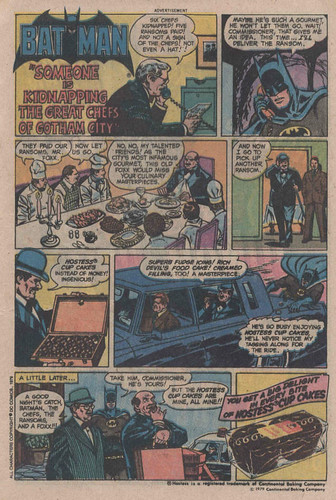 …and this is why America doesn’t give in to terrorist’s ransom demands. I wonder if the networks would ever stoop to this level of advertising on TV. I’d love to see a series of 24 one-minute Hostess ads starring Jack Bauer. In the last minute it would be revealed that Twinkie the kid wasn’t a terrorist, he was honestly trying to transport three tons of Hostess products overseas in hopes of balancing the world economy or something. I’m going to get cracking on writing those so that I can pitch them if the writer’s strike continues. I’ll make a mint.

Wonder Woman and the Barron 1980 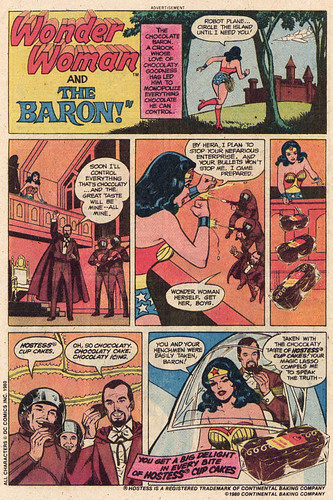 Wouldn’t this ad have been that much cooler if instead of a generic chocolate vampire wannabe called the Baron, Count Chocula was the villain? Man, new idea, advertisement crossovers, like the Secret Wars, but with cartoon advertising icons. Again, another idea that’ll make me rich…

I really need to put out another episode of my podcast, but in the interim…