I’m back with my second to last round of Hostess comic book ads from the 70s and 80s. I know that there are about 50 or so more ads than what I’ve been able to locate in my collection of ads, so sometime this year I think I’m going to have to do some serious $0.25 bin diving to find the rest. I thought I’d share my last round of DC comics Twinkie ads today… 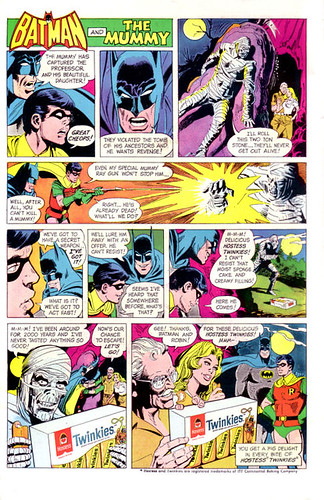 Well, I’ve actually been waiting for a while to get to this one. I believe this is one of the first (if not the first) Hostess comic ads back in ’75, and right from the get go these ads didn’t make much sense. Granted, this comic is relatively straight forward, but there are some crazy wow moments like when Robin pulled the Mummy Ray-Gun out from nowhere. Now what is the point of a mummy ray gun if it doesn’t have an effect on mummies? I suppose Bruce was just humoring Dick when he gave him that last Christmas. Anyway, this ad also features a little bit of a history lesson thanks to Robin’s exclamation of surprise in the first panel. Turns out (and I certainly had to look this up) that Cheops was a 26th century B.C. king of Egypt and builder of the pyramids. Nifty. The only other thing I’d like to point out (besides the Daring Duo’s amazing bolder moving strength) is that in this ad the Twinkie filling is referred to as ‘creamy’ instead of creamed. I wonder if there was a creamy vs. creamed lawsuit at some point? 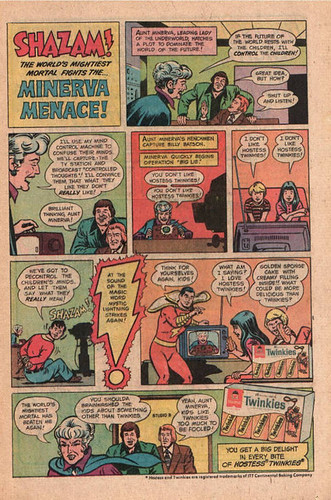 I’m not all that familiar with Shazam, but he sure does seem to have a way with words. All he has to do to unravel all of that dastardly brainwashing is to tell those kids what’s what with a pointing finger for emphasis. I love the non sequitur plot point of the kidnapping of Billy Batson. I guess this is where my ignorance of Shazam really sets in. Is the whole Shazam thing secret? I’d assume no one (except maybe a dog or an uncle or butler) would know that Billy could turn into Shazam… 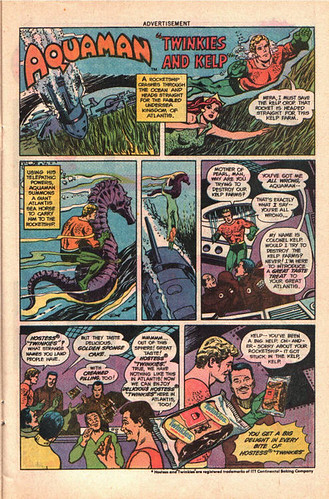 Ha, he said Kelp twice. Seriously, sometimes I really wonder about the prowess of Aquaman. Again, I didn’t grow up on DC comics, but from what I’m gathering in these ads, and from his stand-alone cartoon, the guy is mostly harmless. He never seems to do any of the heavy lifting when it comes to fighting villains (he usually gets the creatures of the sea to do it for him), and in strips like this the writers make him out to be a sort of over reacting blowhard… 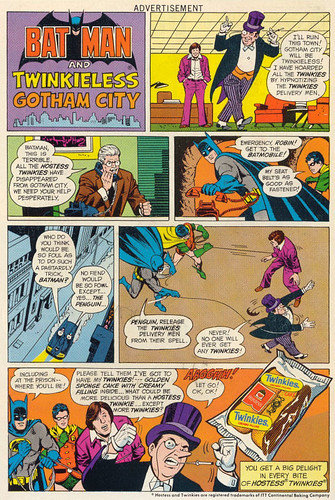 Man, the Penguin sure gave up that Twinkienapping caper pretty darn easily. I guess a little whining from a leisure-suited henchman can go a long way… 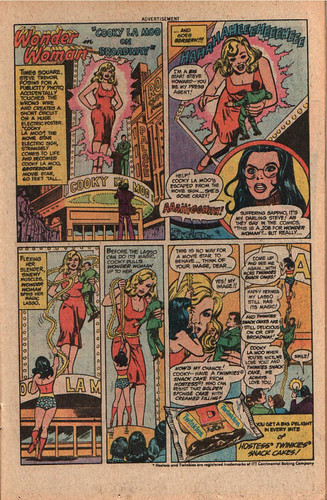 You know, I don’t know if I’d classify a 60 ft. tall blonde bombshell as grotesque. I thought it was kind of funny that the ad wasn’t copy edited as Steve Trevor is referred to by Giant Cooky as Steve Howard.

Green Lantern in Half the People Here 1977 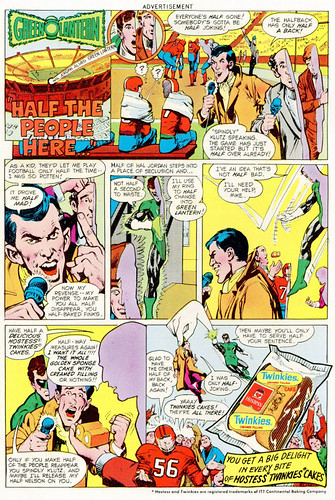 Thank goodness Hal Jordan still had the ring on the right half of his body. Whew. I actually really like this ad, even for it’s zany half-witted plot.

Aquaman in That Dirty Beach 1977 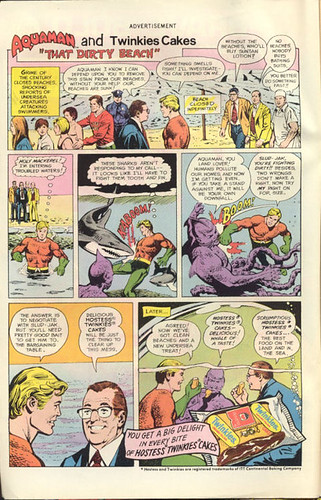 Um, on the one hand I’m really glad to see Aquaman step up and sok a bad guy in the mouth once in awhile, but on the other I’m kind of lost in the horrible message of this ad. So let me get this straight, the answer to stop all the pollution humans are causing is to take a bribe of Twinkies? Right.

Superman in an Unbeatable Power 1978 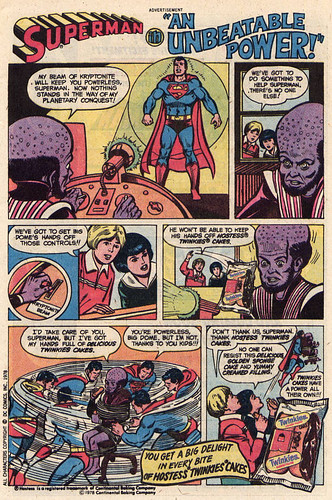 Well now that wasn’t a great plan by Big Dome if it required him to keep his hands on the controls the whole time he had Superman trapped. It’s kind of hard to take over a planet when you’ve got to baby sit a powerless Superman. Sigh, I miss the Captain America Hostess ads, there was a lot more punching.

Aquaman and the Imperiled Sub 1978 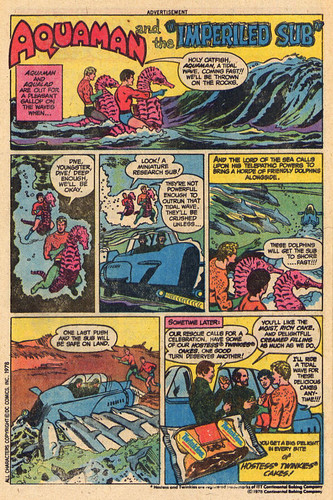 Granted, I know it’s hard to get it across in a one-page strip, but that is one of the sorriest looking tidal waves ever. I think I’ve come across larger waves in the bathtub. Sigh, again, not one of the more exciting Aquaman strips. 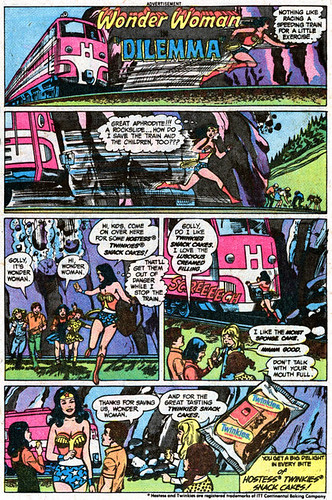 Superman in the Rescue 1979 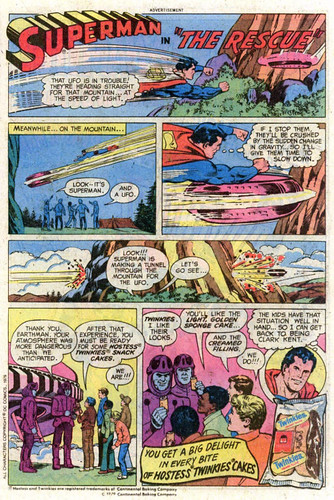 I don’t have much to say for these last two though I love it in the last Superman strip where the writer thought it was pertinent to show the kids on the mountain watching the disaster unfold even though in the previous panel it was pointed out that the UFO and Superman were traveling at the speed of light. Those are some darn observant children.

I wonder how much money could get for selling my blood?