Wow, I really have been lax around here for the past two months.  I’ll tell ya, the holidays really suck all my drive and energy, even when I’m not doing all that much. Anyway, it’s a new year, blah blah, and really want to get back to a more regular posting schedule, so I thought I’d dip back into the well a little and throw up some more Hostess comic book ads.  I have a handful of ads left (I don’t have a complete collection, but I do have another 25 or so left to get to) that I’m going to make my way through over the next week or so and then hopefully I’ll build up another modest head of steam to get me going on a more regular posting schedule.  I certainly have a backlog of stuff that I’d like to share, including getting back to the Galaxy High Cartoon Commentaries, getting started on the second year of the Peel Here column, as well as getting to some other material that I’ve been accumulating over the last year.

So with that said, lets dive back into the weird world of Hostess Comic ads with the last crop of Marvel ads from my collection.  These are all Twinkie-centric and span the years 1979-1981. 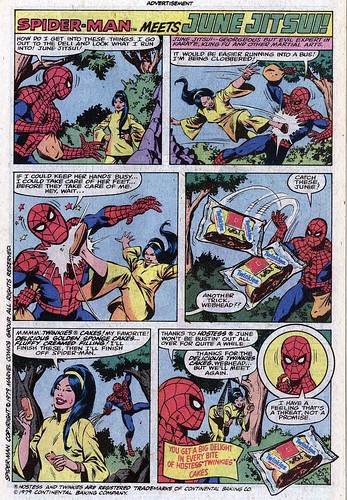 I have a feeling that some days the writers at the Marvel Bullpen came into work and just didn’t have anything to contribute Hostess-gag-wise.  This is about as cut and dry as you get, villain intro, kick, kick, toss-a-Twinkie, gloat, and villain foiled.  I have to admit that I’m glad to see Spidey carrying a sack full of Twinkies instead of him producing them from some hidden spot on his suit, though I’m deducting creativity points since the sack isn’t made out of his webbing.

Spiderman in Hotshot on the Block 1979 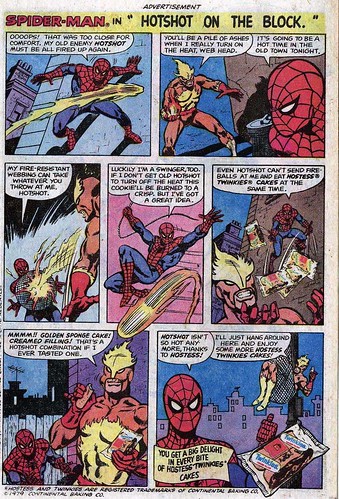 All right this is a little more like it.  Granted, it’s about as thrill packed as the last strip, but at least there are a bunch of bad puns thrown about.  It’s kind of weird to hear Peter refer to himself not only as a swinger, but as a cookie too.  Well it was the 70s.  As far as dashing Hot Shot’s plan by burdening him with a package of Twinkies, well all I have to say is that I hope Mr. Hot Pants learned his lesson and in the future he’ll know that it’s perfectly fine villain etiquette to stuff the entire Twinkie package in one’s mouth, chewing it up, and pulling the plastic wrapper out later, so that you still pitch some fireballs at an silly hero that thought Twinkies could stop you from taking over the world.  I need to write a villain handbook or something… 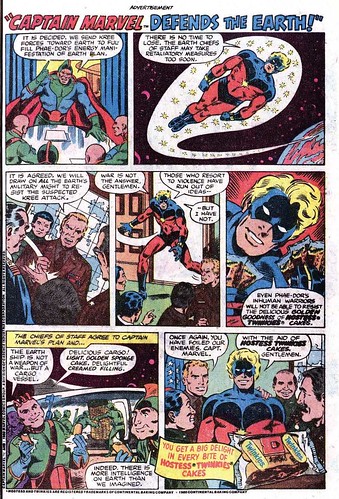 Wow, I believe this ad wins the title of The Weirdest Cold War Strategy Metaphor Ever. Damnit, let those Kree bastards eat cake! 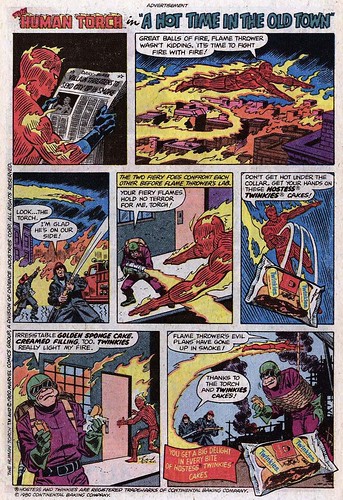 This ad made me chuckle because for once the hero delivered on his pun-y plan. Johnny really does just use the Twinkies as a diversion as he ends up burning down Flame Thrower’s laboratory. Of course, I’m not sure exactly how burning down the lab stopped him considering he was just burning down the city in general, but I’ll let it slide. I guess I’m just extra glad it wasn’t a hollow pun. 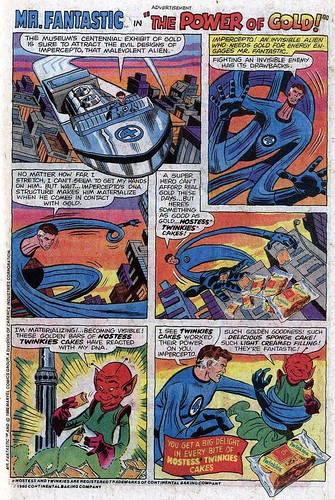 Wow, the writers of these ads really should have avoided trying to explain these strips with science. As golden as a Twinkie might appear, it’s just not gold. On the other hand, I’m so glad the there was a little social commentary thrown in with the crack about heroes not being able to afford gold in the 70s. I find it funny that Richards found it necessary to stockpile gold back in his heyday of hero-ing though; it really gives him a very Hugh Hefner-like quality. I wonder if he had a super stretchy velvety bath robe that he’d wear while counting his gold?

Spiderman in the Rescue 1980 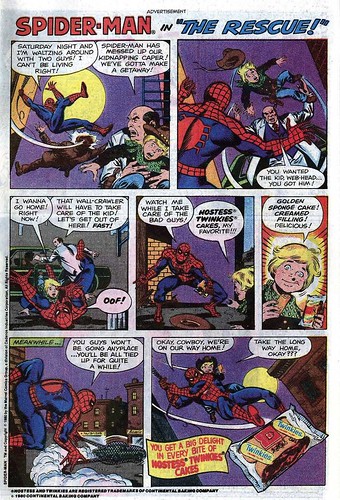 Is it just me or does the pacing of this strip make it seem like that kid screwed up Spidey’s plan to stop those kidnappers with some sweet Twinkie action? 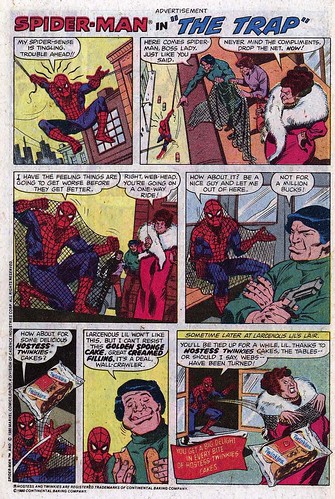 Holy crap, that is some Twinie throwing magic Peter just performed. I mean, if he couldn’t get out of that net, how in the hell did he manage to throw a package of Twinkies through it? I’m starting to think that he’s acting like a chump on purpose just so he can grease the squeaky wheels of injustice with creamed filling. What a sellout. 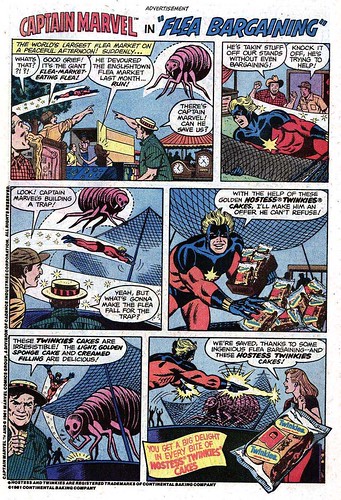 Flea Bargaining is one of those Hostess strips that almost defies description. It’s certainly makes me think that the writer really didn’t want to work on Hostess scripts anymore. This is also a great example of how weird it can be to merge established fictional characters with advertising campaigns. There’s no reason Captain Marvel shouldn’t just blast the giant flea into space or something, but I’d be willing to bet that there was a stipulation of not using violence in the strips (not to mention the idea of working in Hostess products to foil the exploits of the various evildoers.) I think my favorite part of this strip is in the second panel where an angry shop keep is more concerned with turning a profit (or at least getting in a little bargaining time) than helping to stop the giant flea market eating flea. It’s so out of place, yet it really helps to ham up the crazy flea market jokes. Weird. 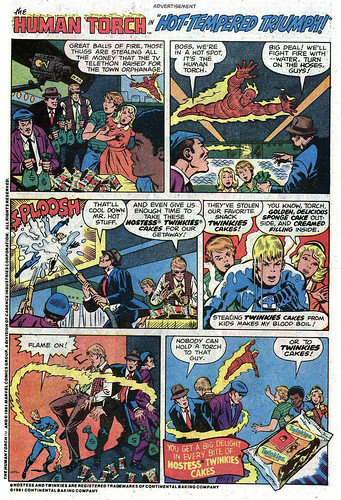 You know, stealing cold hard cash from orphans is one thing, but stealing their Twinkies, well that’s just plain evil. Evil I tells ya. 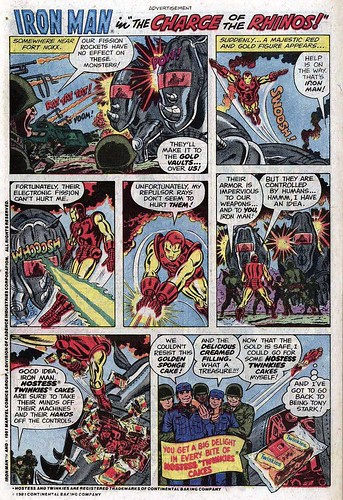 I wonder why the scribe of this comic was pushing Fission so hard? And why giant Rhinos? Granted rhinos are pretty tough, but it still seems like an engineering nightmare to have created them.