Wow, I really need to get back on the Cartoon Commentary! column. This is the effect the holiday season has on me though as my wife and I turn into human pinballs (as if we were caught in some nefarious trap by the wizard of evil-tainment Arcade), bouncing back and forth from one family gathering to the next, planning for trips out of state, and doing our best to shop while not completely putting ourselves in the poorhouse. Sigh, to be 8 again, without all the silly pressures of being an adult. Anyway, if nothing else, I am making sure to keep up with these Peel Here columns, if only because I did most of the hard work ages ago.

This week I thought I’d take another look at some Go Bots stickers, though instead of the Golden Sticker Fun book variety I’m going to take a look at a couple of packs of lenticular puffy stickers. Much like the Transformers (as seen here and here), the Go Bots brand (a Tonka toy) took full advantage of the lenticular sticker technology to showcase the toy line’s main transformation gimmick. These two packages were released in 1984 by Gordy International, and were labeled as Change Action Flicker Stickers… 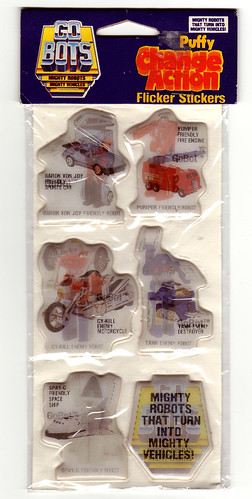 I know of at least three sets of these stickers, though I’m pretty sure there were probably four total (as most puffy sticker sets in the 80s seemed to come in four separate variety packs.) Also, similar to their Transformers lenticular stickers, these Go Bots stickers feature imagery culled from the toys instead of their animated counterparts. What’s kind of cool is that Gordy ended up using photos of the actual toys unlike the transformers stickers, which featured the box art.

I find it kind of funny looking at these stickers because they’re all labeled not only with the character’s name, but also with a description of whether they are friendly or evil. Even though I had a hand full of Go Bots growing up, I never really paid much attention to the factions, well besides knowing that Cy-Kill was the evil leader and Leader-1 was the good, um, leader. I never really watched the cartoon so all I really had to go on was a little Golden storybook to clue me in on this. It’s weird that there weren’t any sort of faction icons like in most other cartoons of the day (the cobra snake, the Thundercats lion head, the Autobot and Decepticon symbols, heck even the Dinosaucers had faction symbols.)

I wonder which side Zod Monster was on? It’s questions like these that always lead back to my desire to own all of the 80s cartoons. Sure, I could look this stuff up on the internet, but I also enjoy the direct approach to research, going straight to the original material.