Lazy, lazy, lazy. So I didn’t get up the rest of the sticker collections from last week, though I think I’m going to hold off on those until later on. This week I thought I’d break out my small collection of V stickers instead. V was a pretty big deal for me growing up and probably had just as much influence on my tastes as the original Star Wars trilogy (in fact, Marc Singer in V reminds me a lot of a Han Solo/Luke Skywalker amalgam.) It was my first experience with a very long format story on film (the 2 mini series run about 8 hours, which doesn’t even include the weekly show which clocks in at around 14 or so additional hours of material.) I missed out on Star Trek as a kid (well except for the cartoon), and Star Wars, though certainly long format, was still only 5 or so hours. V on the other hand seemed monumental in comparison.

I don’t remember the weekly show all that well as I’ve watched the first two mini series a lot more. My fondest memory of the flicks was when I first moved to Georgia in the 8th grade. I had become friends with a couple of guys pretty early (which is weird for me as I’m kind of shy and quiet in person, especially as a kid) and one of things we connected over was the V series. One of them, Jeremy, had taped the entire thing when he was younger, and we’d sit and watch it after school. It was weird because he caught it on his local affiliate channel when he lived in Maryland, so all of the commercials and news breaks that he also ended up taping seemed so foreign to me. My head was already in a weird space after moving from Florida to Massachusetts to New Hampshire and finally to Georgia all within the span of a year, and then I was watching a broadcast from Maryland to boot.

Something that’s always surprised me about V is how little merchandising there seemed to be. There was the one official doll (which I talked about awhile ago), and there were a few other odds and ends, a lunchbox, a series of spin-off novels, a comic book series, and of course these stickers from 1984, but it still really didn’t seem like a lot. 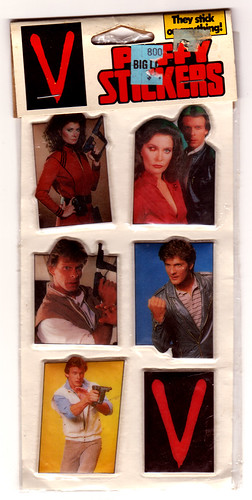 I’m sure these puffy stickers were available in four different packs, but I only managed to track down a couple of them. They made use of imagery from the weekly show, as I don’t recognize the guy in the leather Members Only jacket who is pumping his fist in victory. I really love the sticker on the top right featuring Marc Singer and Jane Badler. I love the one uncovered lizard eye (instead of the overdone image of a character with half of their mask/face torn off.) 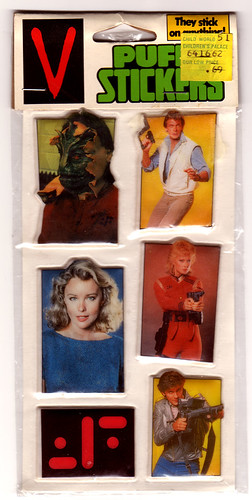 I always really dug their icon, though now that I look back at the series I can see that it’s basically a thinly veiled swastika.

In looking for V stickers I also stumbled across a set of cards (with a sticker sub-set) printed by Fleer, also in 1984. For some reason I never ran across many cards printed by Fleer as a kid, which makes me wonder if they had a smaller distribution or if they were more regional. Even later on when I was getting into baseball cards, Topps was king and Fleer and Donruss were pretty much non-existent. The first thing that jumped out at me when I picked these stickers up was that they are a slightly different size than Topps, a little shorter, and maybe a little stouter. This would have driven me batty as a kid, though I’m not sure if it’s due to the the fact that they would have stuck out or if it’s because I sort of have some slight OCD issues when it comes to standards in size (I’m so glad I didn’t get into comics until much later as I might have shunned stuff like the Tick and TMNT if I hadn’t managed to get over these issues a bit.) 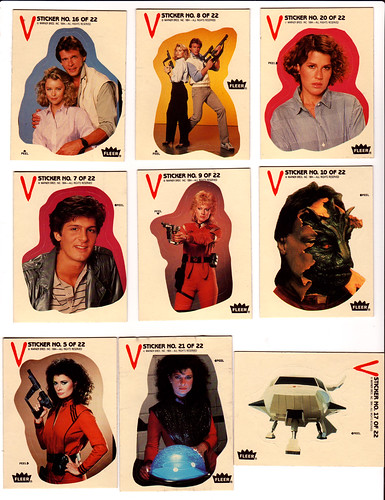 Unfortunately I didn’t find a complete set of these stickers because they were a bit pricey, which leads me to believe that Fleer had a smaller distribution and production scale. I think it’s interesting though that these all seem to have come from the same photo shoot, or at least taken from the same set of screen captures. I kind of wish I found at least one Michael Ironside sticker, though I’m not sure if he ended up on any of them.

Like Topps, these Fleer stickers feature a puzzle poster on the card backs. I’m not positive, but I think this V poster is an enlarged version of sticker number 10 from above.