So, as I mentioned last week, this edition of Peel Here marks the 1-year anniversary of the column and a slightly more focused Branded in the 80s to boot. I’m not really patting myself on the back here as much as I’m surprised that I stuck with it this long. What’s kind of weird is that I’m not even really a sticker enthusiast, at least not in terms of actively collecting or what not.

Anyway, for sort of a special edition of this column I thought it would be fun to share something a little different. One of my goals when I started this was to try and get my hands on an actual sticker collection, something that really illustrates what sticker collecting was like in the late 70s and throughout the 80s. In my minds eye I could see something very similar to what I had growing up, which was an old photo album, the kind with the horribly gaudy covers of either flowers or some sort of wall paper-like print, and filled with sticky pages covered in cellophane. I wanted to share something that felt a little less "mint on card", something that had a little more love attached to it (at some point at least.) As luck would have it I managed to find a very inexpensive auction on eBay that had two photo books filled with stickers, so over this week I thought I’d share them. 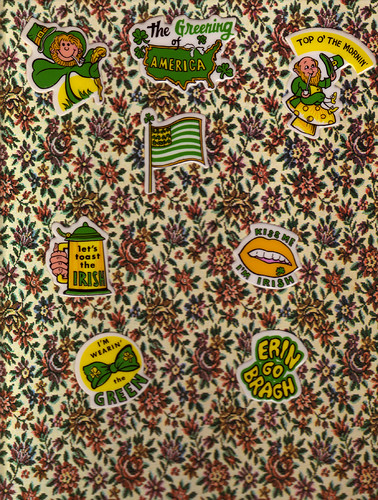 When I opened up the shipping box this came in I was immediately excited (there weren’t pictures in the auction I won), as the photo album was exactly as I pictured it, goofy wallpaper print and jam-packed with stickers. There were even a few St. Patrick’s day stickers adorning the cover.

On the inside front cover there are some interesting stickers. Surrounding the large puffy Tweety sticker (which is pretty well on model so I think it might be official) there are a bunch of smaller Looney Tunes stickers with some questionable artwork. The Elmer Fudd isn’t that bad, but there’s something shifty about Bug’s eyes. I’m not positive, but I believe these puffy stickers are from the late 70s, probably 79 or 80. There are also some generic fruit and animal stickers, which feel like they’re from around the same time period. Intermixed with these puffy stickers are a bunch of quote and word stickers which were issued as some sort of premium (be it cereal or something like that) as I had these very ones in my own sticker book as a kid. They also came with a set of alphabet stickers, which we’ll see later in this album… 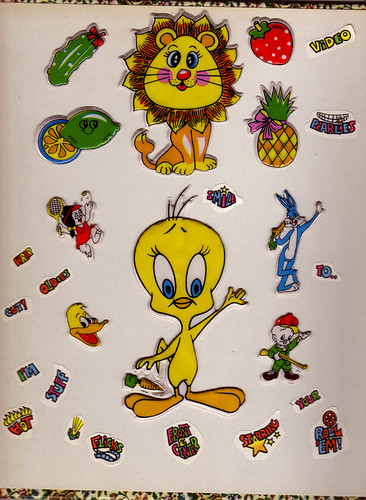 Of course, any 80s sticker collection wouldn’t be complete without at least a few unicorns… 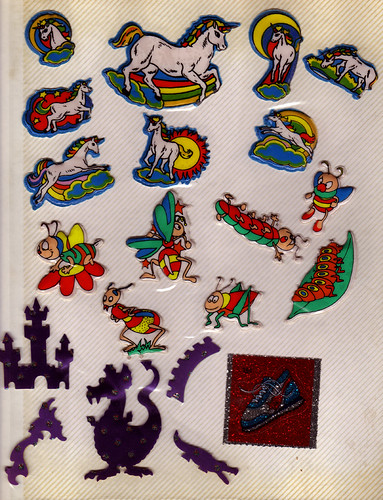 There are also some very weird 3-D cloth stickers on this page at the bottom. They also have little sparkly plastic "jewels" imbedded in them. I’m sort of curious about what came with this set of stickers as there are a few that seem very fantasy oriented (what with the castle, the dragon, and what appears to be dragon’s breath), but then there is the alligator. Kind of weird. 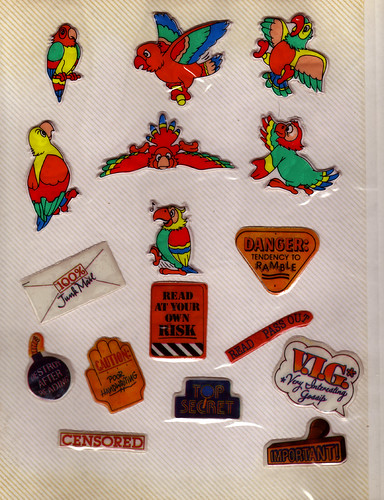 On the below page we have a repeat of the Bugs Bunny sticker from the inside front cover, though much bigger and much more bootleg looking. What is kind of weird about this sticker is all of the little stickers that surround it depicting oddly colored and miss printed food items (and a Yosemite Sam.) I’m pretty sure these stickers all came from the same set, which is really kind of weird, even for bootlegs. 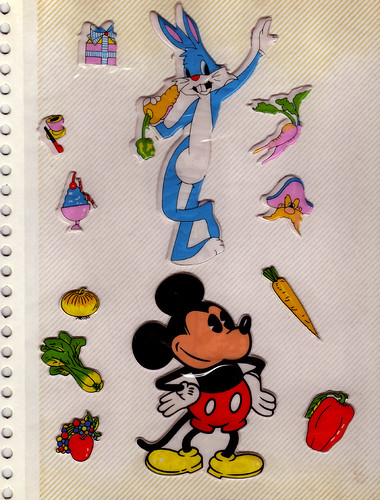 On the next page we get our first glimpse of a really odd sticker variety that I wasn’t aware of until I started scouring eBay for stickers last year, puffy scratch and sniff stickers… 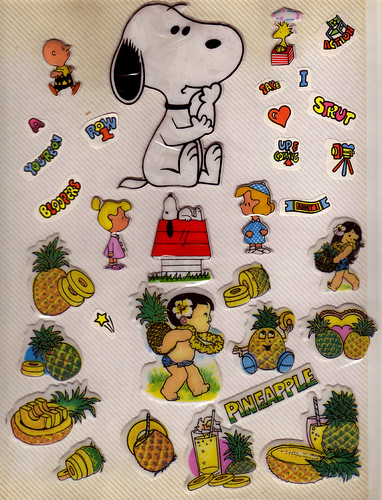 Luckily, who ever started this collection received a ton of them, so on the following pages we’ll get to see many more examples. I’m not sure if time wasn’t all that kind to the design, as you can really see the thick layer of scented material on these, or if they always looked like this. Hey maybe that’s why they weren’t as popular (at least in my limited estimation), maybe because they looked pretty ragged from the get go.

I think it’s kind of weird how the design in the artwork ranges from something that looks a lot like the artwork featuring the Campbell’s Soup Kids (the Hawaiian kids in the pineapple stickers) to some very generic looking Precious Moments kids (in the orange and lemon stickers below.) 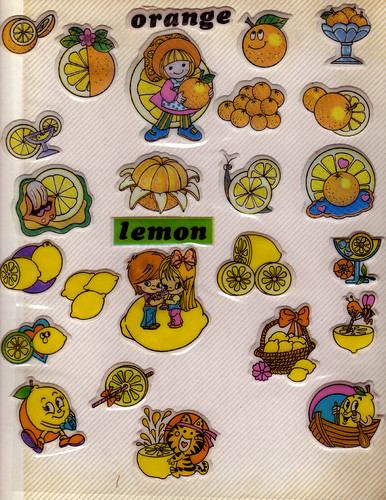 The one thing that I really liked about this collection is that it really hit on a lot of the various styles of stickers available at the time, including these googlie eyed Halloween puffy stickers… 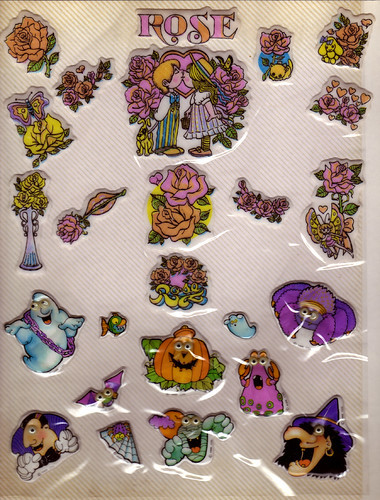 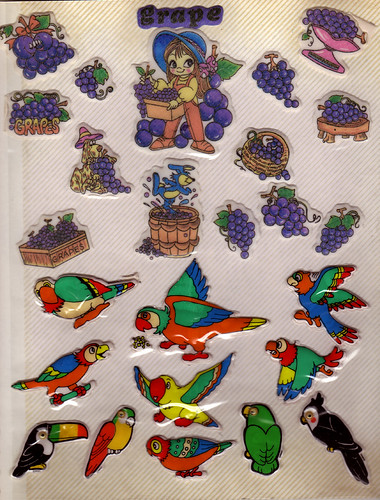 If I had to guess I’d say that this was the collection of a little girl as most of the stickers seem to be in the cuter vein. Another nail in the coffin is this collection of Cabbage Patch Kids puffy stickers. Sure, there were some boys who had these dolls growing up, but I still think it’s a safe bet that this was a girl’s sticker collection. 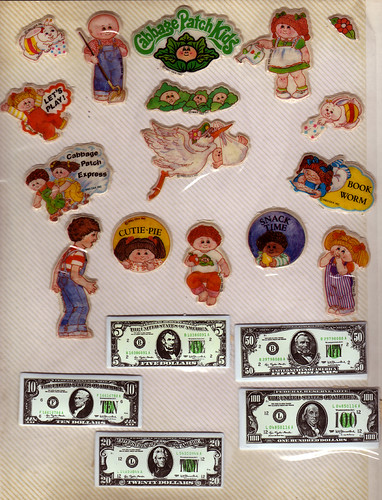 Though there was one earlier that I didn’t mention, this page more or less introduces us to the foil/glitter faction of stickers. I had a few foil stickers growing up, most of which came out of the various vending machines I happened to come across in places like Pizza Hut and Chuck E. Cheese, but I never had any glitter stickers. 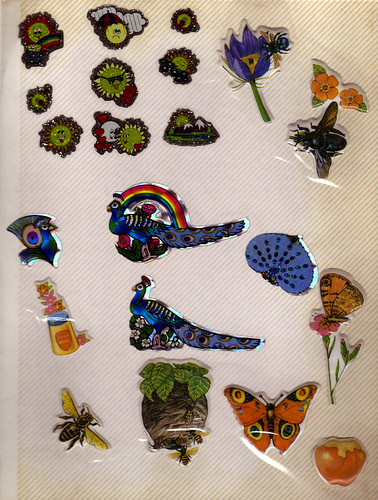 Here’s another page that looks like it’s filled with bootleg stickers. This Goofy sticker looks like it was either made buy the same company that made the off-model Bugs Bunny sticker from before, or came with it as there are also a ton of weird smaller food-themed companion stickers. If it weren’t for that tiny Mickey sticker (as well as that Yosemite Sam sticker from before) I’d probably think that the other small stickers weren’t related to the larger Goofy sticker. This is really weird, though I guess not quite in the neighborhood of Ghostbusters/Panda weird, at least not yet. 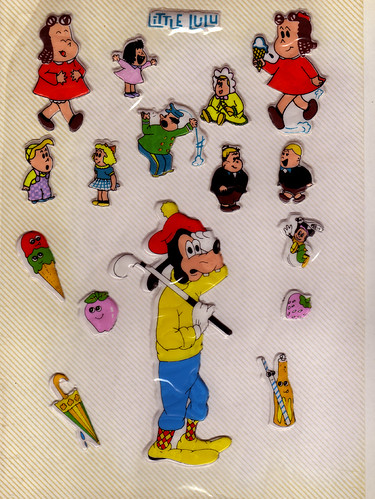 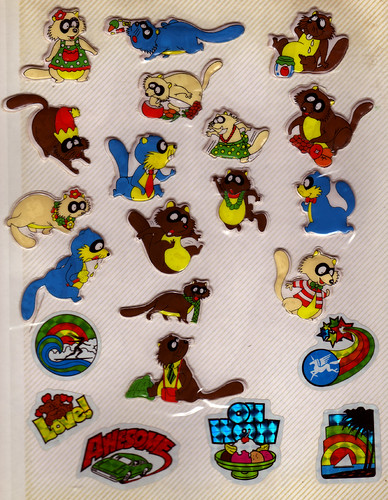 As yet another example of what it was like growing up in my headspace, I think I would have really hated all of the raccoon stickers in the above page, as I would have had no idea "where" they were from (illustrating again how brand conscious I was as a kid.) Even though, it wouldn’t have stopped me from sticking them in the book, as any sticker was a good sticker.

Here are some more Halloween puffy stickers (along with some duplicates of the googlie eyed stickers from before, not to mention the alphabet stickers I mention at the start of the colum.) 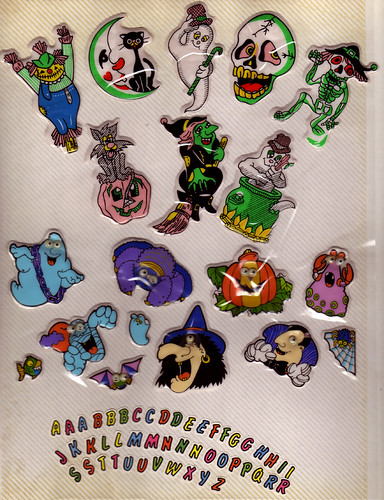 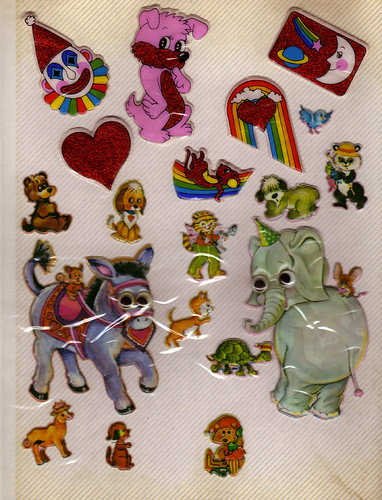 I think it’s odd that the Deputy Dwag sticker set came with a stand-alone sticker of a gun. You’d never see that in today’s uptight society. What’s even funnier (well I guess it’s funny) is how it comes off in this page, where it looks like Grover is way interested in it.  I wonder if that was intentional, and if so, should this make me worry about the child who arranged them? 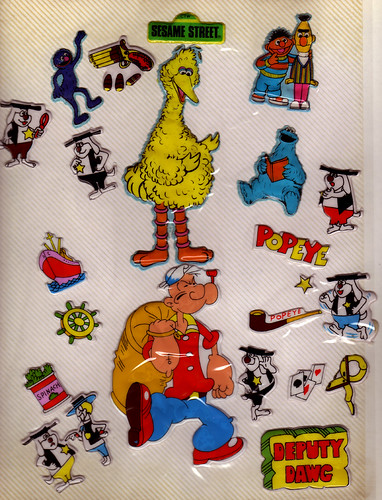 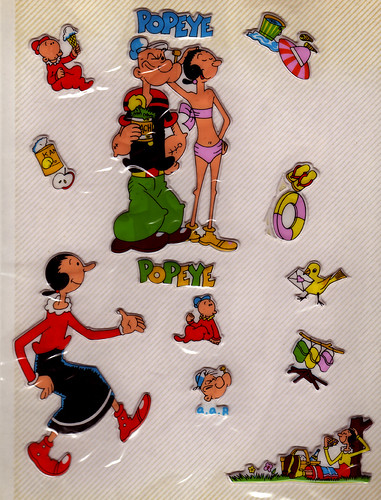 The stickers that I was most excited to see in this set where these Wendy’s "Where’s the Beef" stickers from 1984, which I was searching for to no avail on eBay for months, and as luck would have it, both sets where featured in this collection. 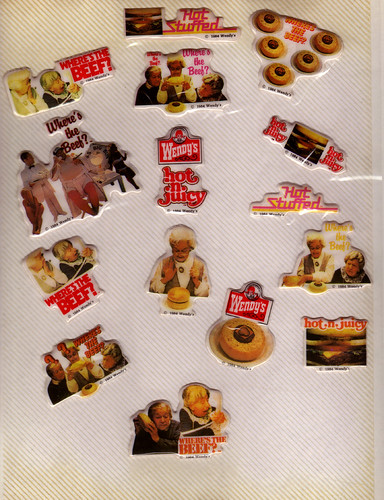 I’ll be honest though, I do not remember the Hot Stuffed logo or what it was for. Hot and Juicy yes, but Hot Stuffed? No.

Almost as cool as the Wendy’s stickers, and yet another set that I was looking for but couldn’t find where these Love Boat stickers. 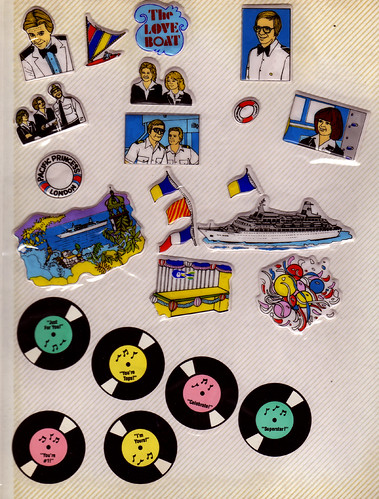 I had managed to find a couple sets on eBay, but both sets were filled with odd cruise themed imagery like piñatas and streamers, and none had any stickers featuring the cast members, which are so much cooler. The only sticker I didn’t get in this collection was of Isaac, but at least I got a Gopher and a Captain Stubing.

Again, almost as cool as the previous pages worth of stickers were these brand name food stickers. I was pretty ecstatic when I saw the Jello Pudding Pops sticker, as I loved these frosty treats as a kid (and it didn’t hurt that Bill Cosby was shilling them either.) Quick side note, I remember one of the best things about the Pudding Pops was the crust of ice that would form on them that would come off in sheets as you ate them. These have popped up again recently, now under the Popsicle branding, but they aren’t the same anymore as they’re shaped like regular thin Popsicles (or fudge pops) instead of the wider, flatter variety that they used to come in. Why does this matter you ask? Because they don’t have that cool-ass sheet of ice on them anymore. A little detail, but one that is apparently important enough to keep me from buying them. 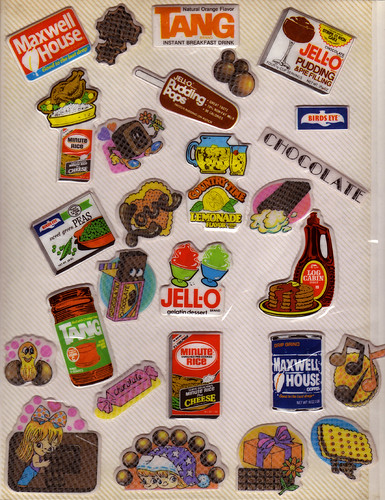 It was also cool to see the older style glass Tang container. I never realized how nostalgic I’d be for food old packaging, almost as much as I feel for the toy lines and cartoons I grew up with. 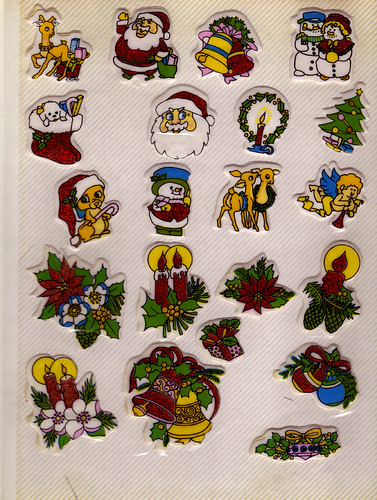 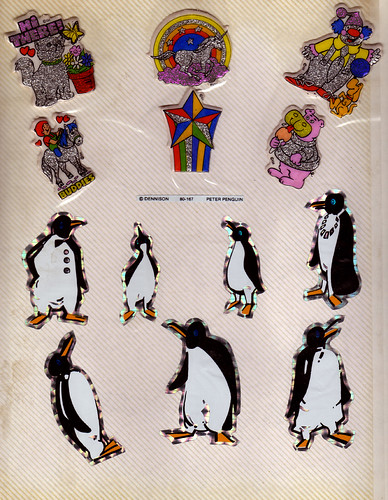 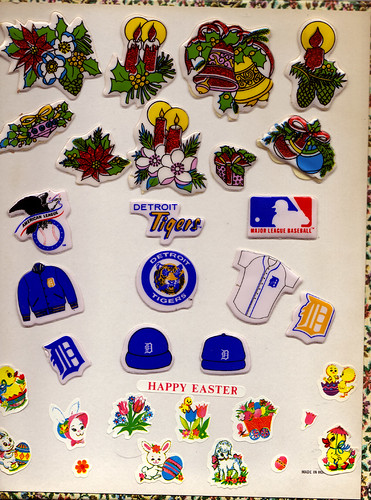 Hopefully I’ll be able to get to the two other collections of stickers that I have to share this week. Next week I should be back on schedule with more Cartoon Commentary! posts as well.

Hi, my name is Shawn and I’m a mechanical pencil nerd…

Ahem! I believe I hear a voice from the crowd…