A ton of Price for a great price…

One of the things that I haven’t really written all that much about this Halloween season are all the movies I’ve been watching.   I guess there are only so many hours in a day.  To make up for that a bit I thought I’d mention this awesome box set of Vincent Price flicks that MGM put out recently (which is made up of a good portion of their previously released Midnite Madness double feature discs.)   I’ve been slowly getting into the Price’s work over the past year or so after watching his awesome turn as Dr. Robert Morgan in The Last Man on Earth.   I’ve been stumbling through his body of work hitting a House on Haunted Hill here and an Abominable Dr. Phibes there.  Well my local Hollywood video went out of business and was selling off all their DVD stock, so on a whim I picked up The Fall of the House of Usher and The Pit and the Pendulum.  I really liked both and wanted to see some more of the Roger Corman Poe adaptations, so after doing a search on Amazon I found the very reasonably priced Vincent Price: Scream Legends Collection… 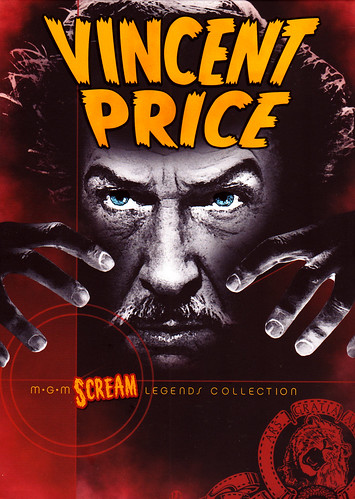 Over the last few days the wife and I found some time to sit down and watch a couple of the flicks which I think managed to show the range (quality-wise) of flicks Price has worked on, as well as what’s offered in this set.  The first flick we took in was Madhouse, released in 1974.

Madhouse is basically a horror infused send up of Price’s own film career.  He plays an actor named Paul Tombs who is best know for staring in a series of gruesome horror flicks all surrounding the character Dr. Death.  At the height of his career as the gruesome doctor, Tombs finally decided to settle down and marry one of his leading ladies, the announcement of which he made at a gala New Years party with all of his friends and colleagues.  Unfortunately not everyone is so happy with his impending nuptials and ends up killing his bride to be (beheading her in fact), though the question is raised, did Tombs kill her himself.  After a lengthy hiatus from film making (not to mention a stay in an asylum) Tombs decides to re-embark on his film career at the behest of his best friend and co-creator of Dr. Death Herbert Flay (played by the ever awesome Peter Cushing.)  Of course, straight away the bodies start piling up again, as do the questions as to who is killing all of these people.

At then end of the day I really enjoyed the first two thirds of the film, but it really suffered from an almost incomprehensible climax and resolution.  It didn’t help that the film was filled with plot holes and some questionable directing (way too many red herrings, a fact that is actually celebrated in the final act with an actual dish of red herring.)  Price and Cushing do their best with what they have, even though their effort barely rescues this film from complete disaster.  At a time when the modern horror landscape was drastically changing, and surrounded by the likes of Black Christmas, The Texas Chainsaw Massacre, Night of the Living Dead, and Last House on the left, flicks like Madhouse with their questionable effects work (many obviously rubber spiders abound) and poorly written scripts just a little past their day.

The second film we caught was the much better and down right disturbing Witchfinder General (though American audiences might know it as The Conqueror Worm), released in 1968. 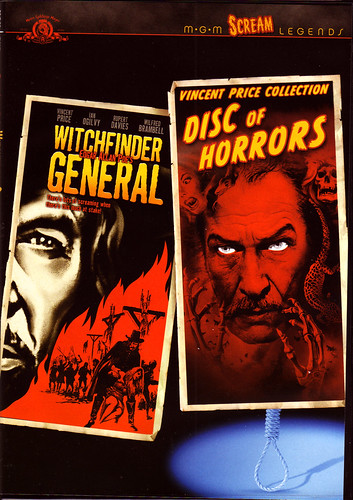 In this flick Price plays Mathew Hopkins, a lawyer and professional witch finder/executor, a character that’s based on an actual witch inquisitor.  While making his way through England torturing and executing "confessed" witches (whether they are guilty or not), Hopkins is summoned to a small town at the behest of the populace to look into a local priest.  It just so happens that the priest is the uncle of Sarah Lowes, whose fiancé (Richard Marshall, played by Ian Ogilvy) is a Roundhead fighting against the Royalists.   After Hopkins tortures and executes Sarah’s uncle Richard comes back to find his soon to be wife in quite a state (she had offered herself to Hopkins in exchange for her uncle’s safety and was inadvertently raped by Hopkins’ assistant in the process.)  Richard vows revenge on Hopkins, stopping at nothing to see him pay for what he’s done.

The film was very well made with a startlingly non-camp performance from Price (a feat which young auteur director Michael Reeves accomplished by constantly questioning Price’s acting choices unexplained to a point where Price ended up reeling in his typical black humor.)  The film was pretty brutal for the time, and much more so than Price seems to typically make.  I think it’s because the material was handle very realistically and straight forward with no actual witchcraft or crazy plot devices.  I was also surprised by the very downbeat ending, also a rarity in Price’s oeuvre.

I can’t wait to make my way through the rest of the set which include five more films, Theater of Blood, Tales of Terror, Twice Told Tales, The Abominable Dr. Phibes (which I have seen and love), and Dr. Phibes Rises Again.   This set also includes four biographical featurettes (including on that focuses on the Witchfinder General in particular) that though aren’t quite as in depth as one might like, do offer a nice staring point into the work of an amazing man.  All in all, it’s well worth the $30 price tag (though currently you can find it on amazon.com for around $22.)

Peel Here #109: In monster baseball you use grave markers as the bases…