I figured, since we’re getting down to the wire with only a handful of days between now and the big day that I’d sort of round up the rest of my Halloween food haul for this year. First off though, I’d like to point to I-Mockery’s great rundown of 2007 candy offerings, it’s a great list and way more exhaustive than I had the energy to do, so if you get a chance take a second to look at his write up and make his impending sugar coma a little more worthwhile.

I thought I’d start off with a fun new version of pretty much the only cereal I ate on a regular basis growing up, Cap’n Crunch. I’m not sure if this is new for this year, or if it’s popped up in the past, but it’s the first time I’ve ever spotted a box of Halloween Crunch on my local store shelves… 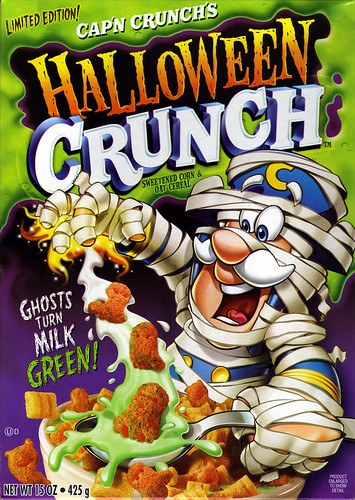 Basically, this is a variation on the Crunch Berries variety except instead of berries you get berry flavored ghosts. To add a little more zing, the ghosts (which are sort of an orange-ish red) turn a green-ish orange in milk (or I suppose any other liquid, but what else are we really eating our cereal with), and in turn they sort of turn the milk green. The whole color change wasn’t nearly as astounding as I’d hoped, but I guess concessions have to be made to keep the stuff edible.

Even though I love the idea of it, I’m not a big cereal eater as I’m really not into sweet stuff. I do however love all of the pageantry surrounding the sugary breakfast food, in particular the mascots and artwork. In this respect Halloween Crunch is pretty darn awesome in my book as I’ve never seen the Cap’n so weirdly animated. I love the whole mummy gag, and the idea that he all of a sudden has the mystical power to summon forth color-changing ghost berries is pretty wild. 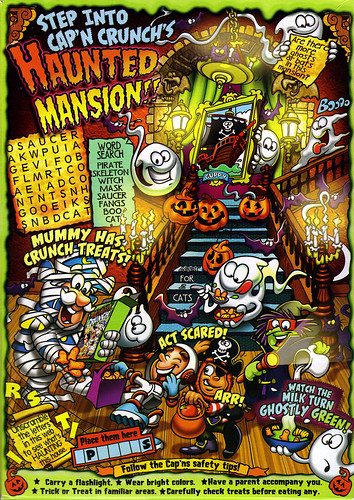 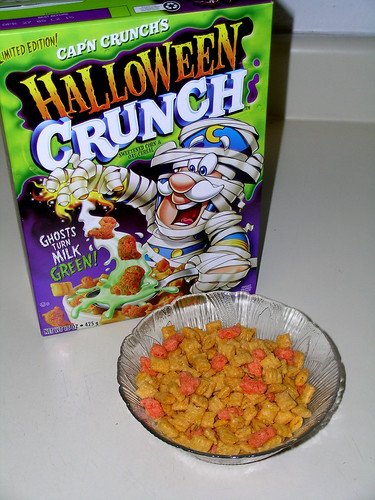 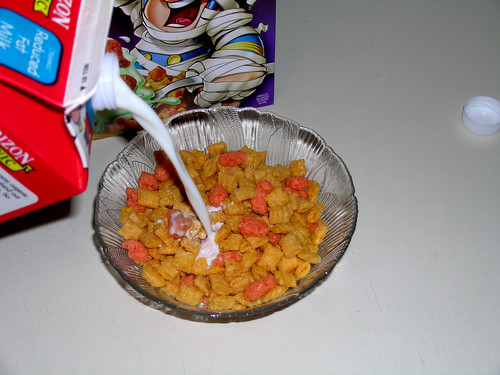 I know some other brands have gone hog wild during Halloween in the past, but this year there weren’t that many other cereals getting into the spirit so to speak. Besides the trio of monster cereals hitting shelves again (Franken-Berry, Boo Berry, and Count Chocula), the only other season box I saw were these Lucky Charms. There was nothing special about the cereal, but there was a fun bat mask that you could cut out of the back of the box. (Click picture below to see the Lucky Charms box close-up.) 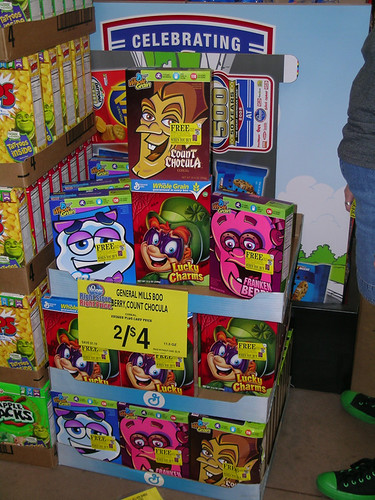 There were also a few other bags of candy I picked up this year, though I tried to stick to stuff that was doing something a little more interesting than your normal Halloween candy offerings. First up we have one of my favorite finds this year, Ghost Dots. 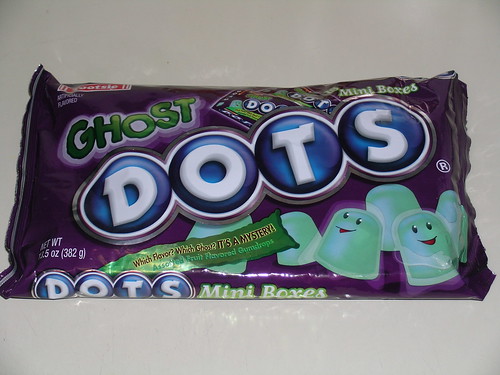 Basically, these are just like the normal dots, except they come in an awesome translucent green (that looks a lot like your basic glow in the dark coloring) and they’re all mystery flavors. I love the concept on these, I mean the whole idea that candy would have spirits is pretty crazy, and now kids all over the world get to send them to the after life again like so many scared Pac Man ghosts. 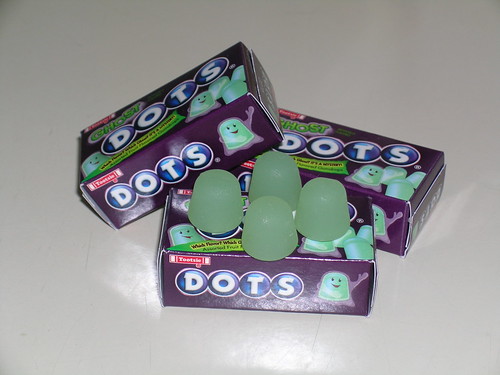 Another confection that I found in my local Dollar Tree which ended up doing something a little different were these Mr. Yummy Skeleton Pops. 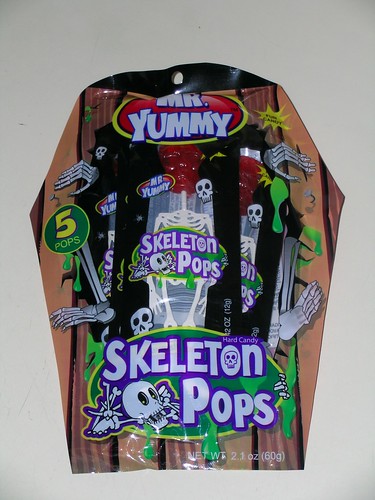 I love the idea of replacing your basic boring paper stick with a plastic skeleton. It’s just genius. Unfortunately the candy skulls are pretty much tasteless and even at a dollar a bag (you get five) it’s a sort of a waste. I do have to give them points on creativity though. I’ve also seen another variation on this concept that had skeleton parts (arms and legs mostly) in a much larger bag (that was also around $6 so I decided to skip it), not to mention the build-a-skeleton pops that are reviewed on the I-Mockery site. 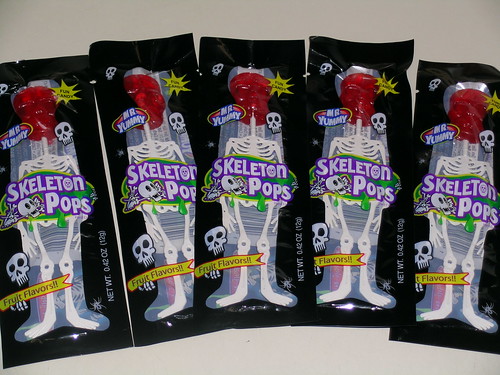 The last candies up today are the Jolly Rancher Creepy Pops… 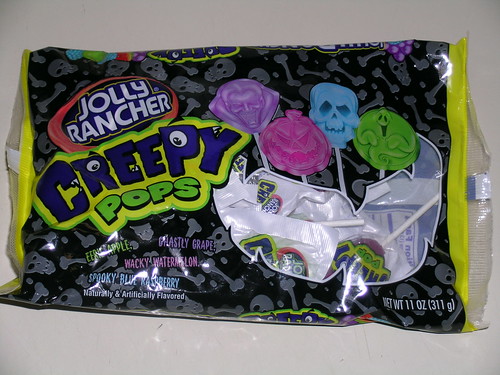 At the end of the day there isn’t anything ground breaking about these except that they taste awesome and just happen to be molded in the shapes of ghosts, vampires, skulls and jack-o-lanterns. You usually can’t go wrong with Jolly Rancher.