Earlier on in the season when I first stumbled into the Wal-Mart Halloween section as it was being put up, I noticed what has quickly become my favorite find of the season (their packaging mascot for this year.) 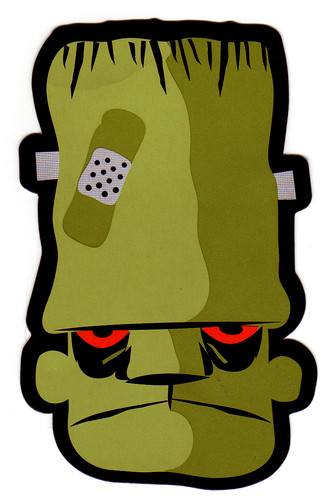 What’s kind of funny is that all I wanted that day was to buy one of these little Frankie tags, but everything that he was attached to was either too much to justify buying the product just for the tag, or something that would have been a total waste to justify buying it for the tag alone. I hate wasting money, but I hate throwing out perfectly good stuff just because I wanted to own the box it came in (yeah, I know I have some issues.) So the question became what I could buy that was branded with this awesome Frankie design, while spending the least amount of money while also getting the most mileage out of the product. I had it narrowed down to a tiny felt bag that was $2 and a cheap $1 rubber mask (the entire set of which I already bought last year.)

While I was driving myself nuts trying to figure out this monumental problem, I was walking up and down the few aisles Wal-Mart had set aside for season stuff and my flitted across a package of paper cut-outs that I think I’ve seen on shelves for as long as I can remember. It’s a set that I’ve purchased a few times in my life, mostly in a last minute effort to decorate my mail room at work. What caught my eye though was that like practically everything else in Walls-Mart this year it was branded with the Frankie illustration. Though it was a little more expensive, coming in at a whopping $2.84, I figured that if nothing else I could throw up the cut-outs at work again this year.

When I got back to work I opened up the package and for the first time I took a real good look at the set and was surprised at just how long some of these paper cut-outs had been around, and I figured why not hit the interwebnet and try and find out a little bit more about these. Though I’m sure everyone and their mom already knows this, these paper cut-outs are made by the Beistle Company who have been in the market of novelty decorations since 1900. In fact, I think they’re responsible for most of the paper cut-out designs (across all holidays) that most people have fond memories for since they license out their designs to practically everyone making these types of decorations.

Unfortunately, only a few of the designs in the package I bought would fit on the scanner, but they are some of the really cool ones… 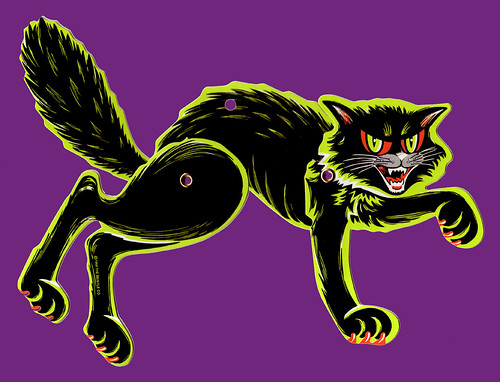 Jointed Skeleton (there wasn’t a date on him, but I’d be willing to be he was conceived in the 60s…) 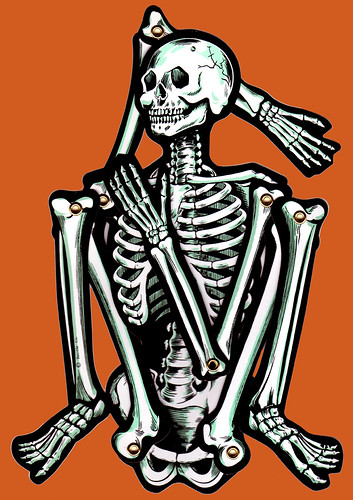 …and last but not least, the amazing Flaming Skull (circa 1973.) 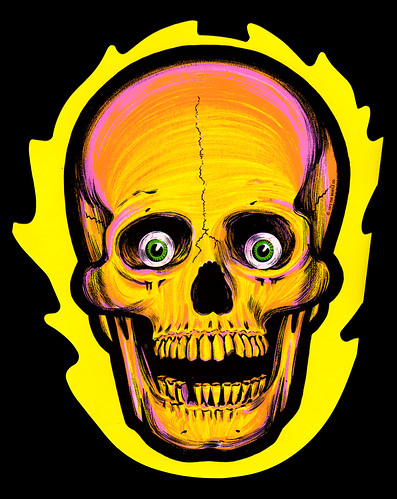 For cheaply produced quick holiday fare, there really is a lot of artistry to these drawings and designs. I love all of the multicolored detail on the flaming skull, which has some really great line work to it.

Beistle has a website where you can order direct from them, and recently (as seen over at the Secret Fun Blog) they’ve been reproducing more of their more vintage fare (I tried to get direct links to the various products but their website always re-directs back to the home page so if you do a search for the following product numbers you should find what they have available, 01008, 01015, 01063, 01193, 01315, 01318.) Spookshows.com also has a nice write up about the company here.

My only problem now is that Wal-Mart has an alternate version of their Frankie Halloween mascot tag on some of their seasonal clothing that is twice as cool as the tag above, but what am I going to do with a child’s size t-shirt, which I’d have to buy in order to get it.  I think I need a shrink.

Ever notice how the visitor’s logo from V looks like a swastika? Creepy…

Monster Squad: The Behind the Scenes Extravaganza!

I’ll see you on the Flip Side…