I can’t believe there are only ten more days until Halloween (if you count today.) This month has flown by, which kind of surprises me considering the amount of posting I’ve been doing. I guess time flies and all that rut. Anyway, not only has this month flown by, but the year as well. In a couple more weeks I will have been doing the Peel Here column for a year, which seems kind of strange to me. I’m too lazy to check back to see if I mentioned it in the first column, but my goal was to try and do the sticker deal for at least a year, and from the looks of it, I have enough material to last almost through a second, so we’ll see how that goes.

To sort of bookend last years Halloween DVD contest, I thought I’d pull out my set of the 1986 Topps Little Shop of Horrors sticker cards. These were kind of strange (like the Topps Supergirl the movie sticker cards) in that the entire set consists of stickers instead of an eleven or twenty card subset. Also like the Supergirl stickers, these are sort of mashed together with what would have probably made up the basic set of cards in that most of the stickers feature the story of the movies in the backs instead of just poster puzzle pieces. I’m not sure if Topps saw a trend in the popularity of stickers in general or if they were getting a lot of feedback on their subsets, but it’s interesting to see them sort of abandoning basic non-sports cards in favor of stickers. Heck, their Wacky Packs and Garbage Pail Kids series probably also had an impact on this shift. 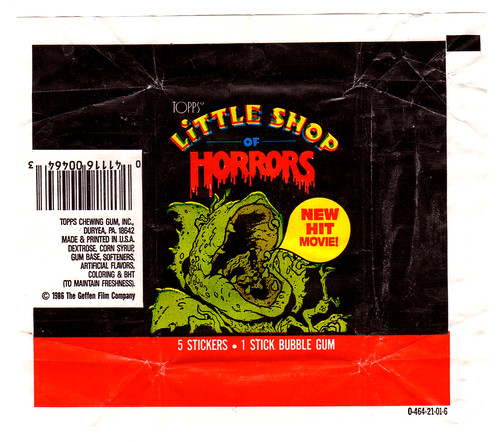 The set consisted of 44 stickers, 32 of which had story backs, and 11 that had either the puzzle poster pieces or a completed poster card. Over all these are both kind of cool, and kind of silly in that the Topps gang added a bunch of subtitles and quotes which are both not lifted from the movie or funny in most cases. 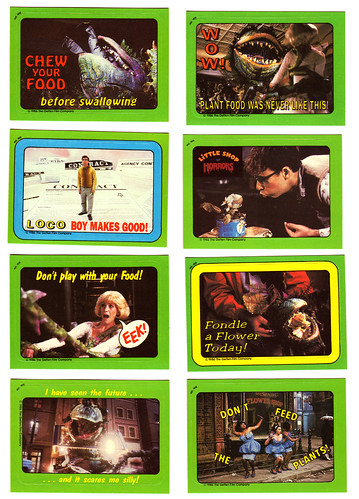 There are some stickers that shine through though, in particular the one utilizing the screen shot where Frank Oz did the "from in the mouth" camera gag in the dentist office. 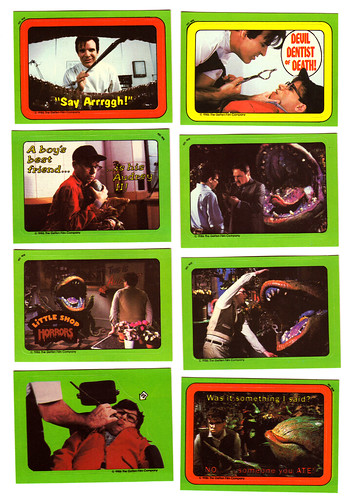 Then again, there are some great stickers that are really hampered by all the added text, as in the crazed Steve Martin one below… 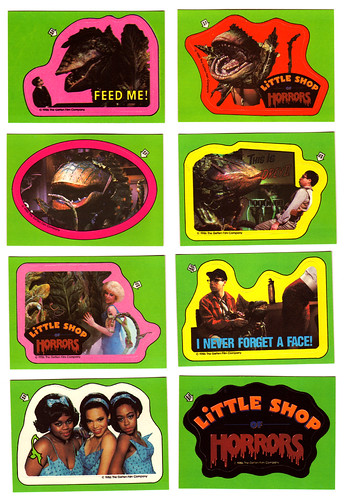 I also didn’t care for some of the artistic embellishments, like adding a little vine on Audrey’s shoulder. 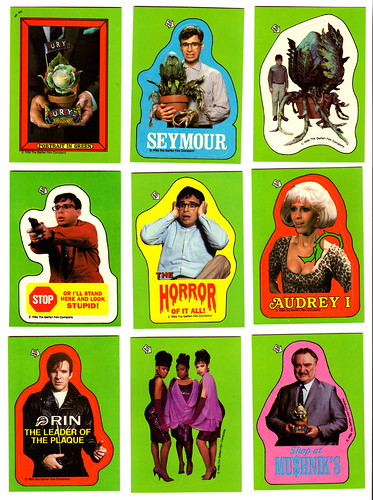 On the other hand I really dig the three stickers featuring drawings of Audrey II that made it into the set. I’m not sure if these were done for the set or if they were production drawings that Topps had access to, but it’s nice to see a non-screen shot sticker here and there. 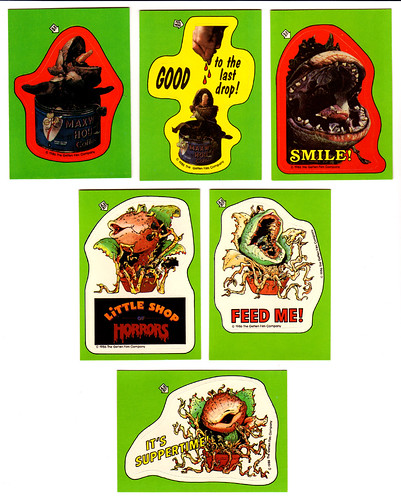 Actually, I’m kind of wondering who this set of stickers was for. Granted, I saw this movie when it came out when I was nine or so, but my parents were kind of liberal on gore and violence. I mean, I don’t think this movie is so bad kids shouldn’t see it, but it does have a lot of adult innuendo and, well, violence, so it doesn’t really feel like the sort of flick that would be aimed at kids, and therefore it’s kind of weird that there was a set of bubblegum cards/stickers produced. I mean the collectible market wasn’t like it is now back in ’86, so were adults buying these? Now that I think about it, who was buying the Rocky Horror Picture Show trading cards that were released back in 1980? I kind of figure that these two flicks would have a very similar audience, which is what, teens and twenty somethings? Also now that I’m remembering, there was also a segment in the show Head of the Class that featured the class performing Little Shop (and it seemed more influenced on the Oz remake than the original), so if a sitcom was featuring it, maybe it was aimed at a more family audience. I don’t know. 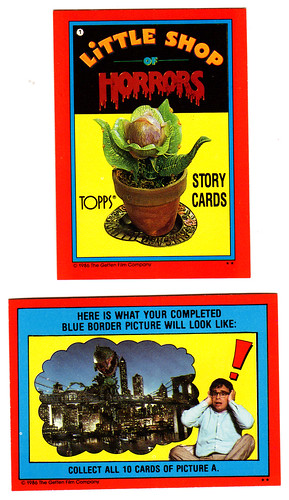 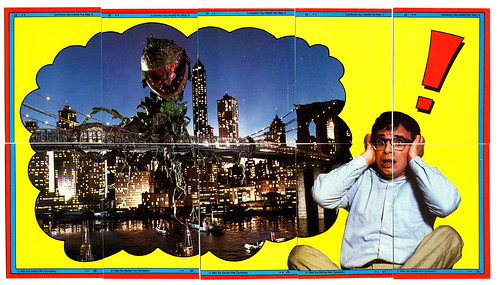 Anyway, the card backs feature a super condensed version of the story, which you can enjoy below… 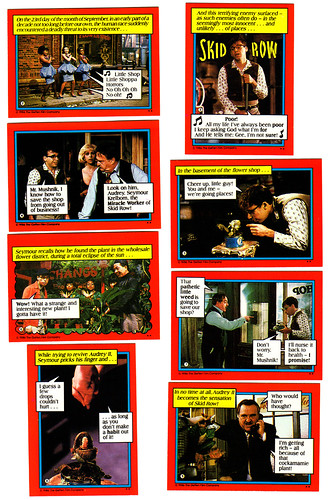 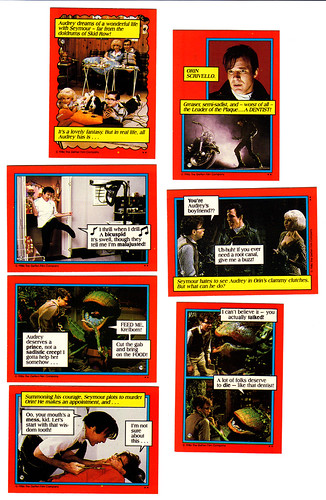 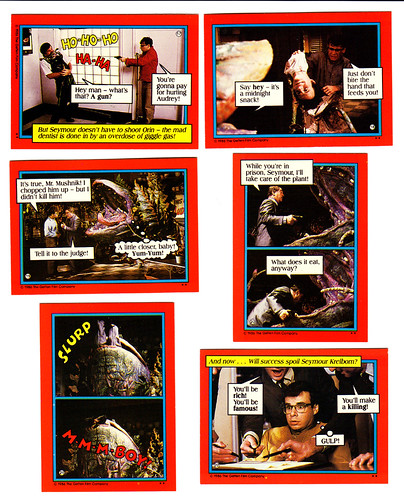 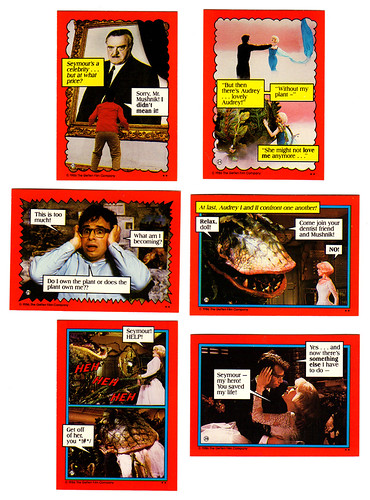 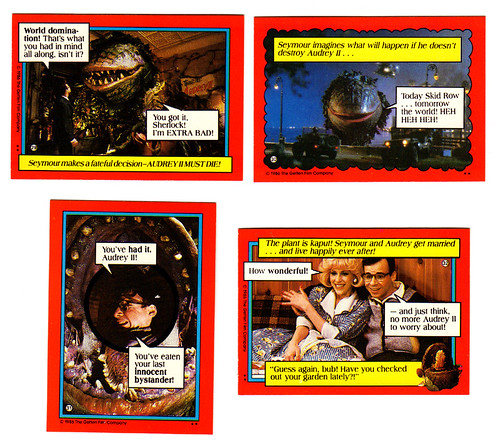 Next week on Peel Here I’ll wrap up the Halloween sticker festivities by break out my set of more modern horror icons featured on their own sticker cards.

Celebrating 25 years of the Goonies!