More covers, and a CONTEST update!

In talking about the odd cover choices publishers sometimes make with some novels (like not featuring the title character, or any character for that matter, on say the cover of Dracula), it reminded me of the various covers I’ve seen on Mary Shelly’s Frankenstein. Granted, I tend to associate the monster with the classic Universal interpretation, which I realize isn’t probably the best, but I never seem to see anything as striking. I’ve had three copies of Frankenstein over the years, two of which featured a desolate landscape at dawn with a gnarled tree branch in the foreground, and a third which featured a graveyard.

Recently I stumbled across what I think is my favorite cover (and I realize that this probably not the best one either), which features a portrait of Boris Karloff as the monster. You can always tell the Karloff images by the sunken right cheek where the actor had some bridge work (or something) that he’d remove and suck his cheek in to give the monster’s visage a little more of a corpse like appearance. 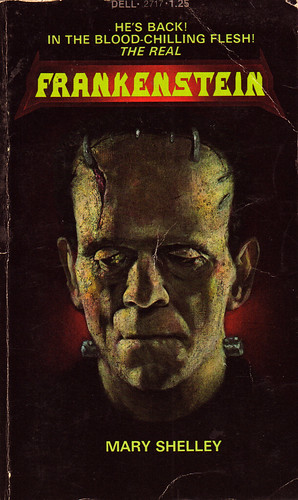 This version was published by Dell in 1975 soon after the release of Young Frankenstein (I know this because there is a blurb on the back of the book taking a jab at the film’s comedic portrayal of the monster.)

This brings me back to the contest I’m currently running this holiday season. I was trying to think of a fun gift pack and I decided that since Frankenstein is my favorite monster, that it would make a might fine prize pack. So the lucky winner of the "create your own audio ghost story" contest shall receive the following: 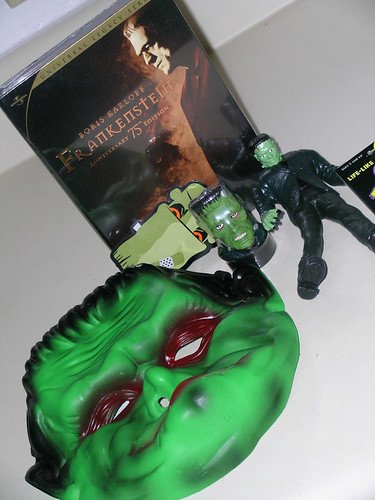 Included are one licensed stretch monster and molded bust votive, one Wal-Mart Franky mask (with the awesomely designed tag to boot), the above mentioned copy of Mary Shelly’s masterpiece, as well as a brand new copy of the 75th anniversary Legacy collection Frankenstein DVD (which has 2 discs and a ton of features including what I hear is an awesome documentary on the Universal era of monster movies.) So you can sit back and look like the monster in the mask, while you simultaneously read the book, watch the film, play with the monster, and even do it all by mood lighting from a monster candle. What more could a person ask for?

All the details on the contest can be found here, and now, thanks to Tom Foolery, you can also download a zip file of all of the sound effects (right click and save as) if you don’t feel like clicking through and grabbing them.