One, Two Freddy’s Coming for you, Three, Four, better buy this set of schwag or Freddy will kill you…

Since Kirk from the Secret Fun Spot put up an awesome recollection about his esteemed membership in good standing in the Freddy Fan Club, I thought it would be fun to share this comic ad from around 1987 which features a bevy of Nightmare on Elm Street schwag. The quality of the printing and the slight deterioration of the paper don’t do the ad any justice, but I think it comes off well enough. For only $98 (4 easy payments of $26.50) you too could have your own rubber Freddy mask, soft Styrofoam fedora, thin canvas and plastic glove, framed mini poster, VHS cassette of the first flick, companion book to the series, and last but not least the official board game… 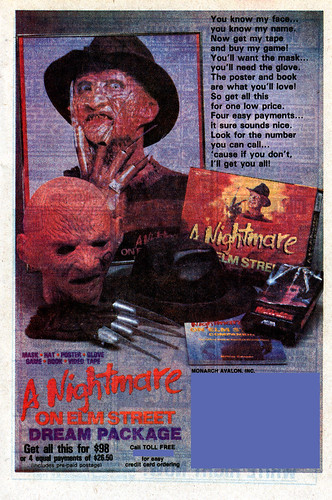 The ad is kind of ominous as it threatens that if you don’t buy the package, Freddy will "…get you all…", which I assume means he’ll kill everyone everywhere.

Though I wasn’t allowed to see the first two movies when they came out, I was still a huge Freddy fan and I did in fact have my very own costume set featured in this ad.  I didn’t even wear it for Halloween, I think I just wanted it for everyday use. I remember that the hat I had looked more like a sombrero because there was a split up the back of it and it never really retained it’s fedora-like shape. I also remember having many elaborate daydreams about constructing my own glove out of kitchen knives and stuff, but I wasn’t that industrious and I’m glad to read that Kirk was, and then some.

I’m not sure how many licensed games were made off of the Nightmare series, but there’s a good chance that this is the same board game that Matt over at X-Entertainment reviewed a while ago (just with a different cover perhaps.)

31 Days of Monsters: A Halfway Countdown Recap and a Contest!

If I had a million dollars…